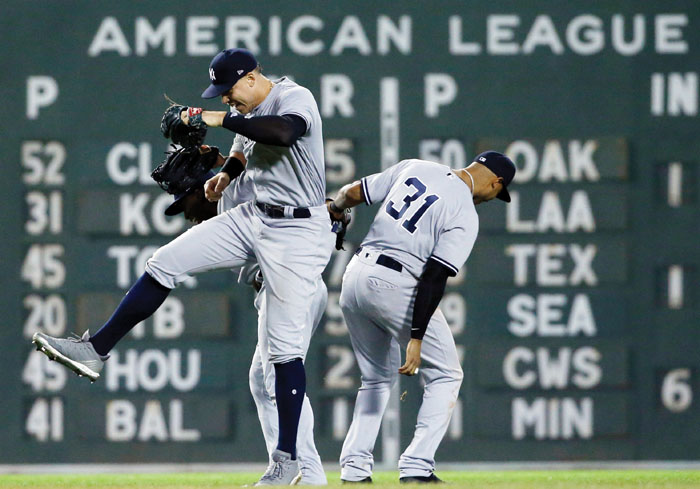 YANKEES 11, RED SOX 6
BOSTON (AP) — New York clinched home-field advantage for the AL wild-card game, hitting four homers to tie the major league single-season record and beat Boston.
Aaron Judge hit his first homer since coming off the disabled list Sept. 14, and Gary Sanchez, Aaron Hicks and Luke Voit also homered to match the mark of 264 set by the 1997 Seattle Mariners.
The win in the opener of the three-game series settled the AL’s last remaining postseason question with two games to go. The Yankees will host Oakland on Wednesday, with the winner playing Boston.
The Red Sox, who clinched the best record in baseball with a franchise-record 107 wins, were hoping to make things difficult for their archrivals — and the Athletics, too — by forcing the winner of the wild-card game to have to fly cross-country next week. The ALDS begins in Boston on Friday.
J.A. Happ (17-6) pitched three perfect innings and allowed just one hit through five. Staked to an 8-0 lead, he loaded the bases in the sixth for Steve Pearce’s grand slam, but got Rafael Devers on a groundout to end the inning. Brian Johnson (4-5) was the loser.

ROCKIES 5, NATIONALS 2
DENVER (AP) — The NL West-leading Colorado Rockies locked up a playoff berth for the second straight season, beating the Washington Nationals 5-2 on Friday night for their eighth win in a row behind a resilient start from Kyle Freeland.
David Dahl homered for the fifth consecutive game and Ian Desmond hit a two-run homer against his former team to help Colorado clinch at least a wild card with two games remaining. The Rockies entered the night with a one-game lead over the Los Angeles Dodgers as they try to wrap up the franchise’s first division crown.
Wade Davis struck out Bryce Harper looking to end the game and earn his 43rd save. The sellout crowd at Coors Field roared and fireworks went off.
The Rockies are headed to the postseason in back-to-back years for the first time in team history. This is their fifth playoff trip since the franchise began in 1993 — last year, they lost to Arizona in the NL wild-card game.
Freeland (17-7) wiggled out of jam after jam on a cool night to finish the season with a 2.40 ERA in games at the hitter-friendly ballpark. The lefty allowed two runs and 11 hits over six innings before turning it over to a staunch bullpen.
Joe Ross (0-2) allowed four runs over five innings in his third start since undergoing Tommy John surgery last year. Charlie Blackmon had a solo homer in the Rockies third.