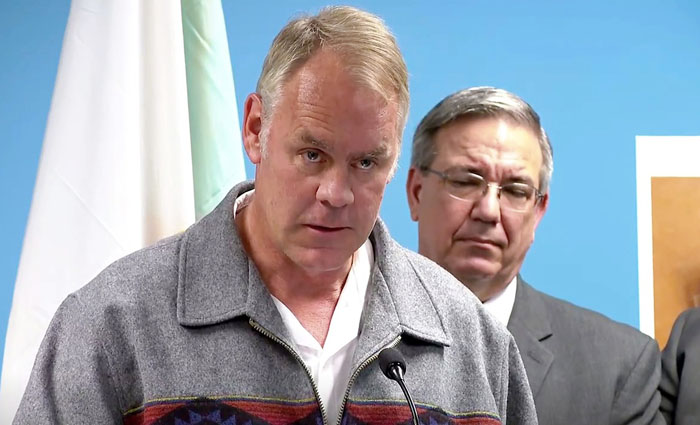 Interior Secretary Ryan Zinke addresses reporters at a news conference Thursday in Asheville to announce that 76 people were arrested on drug charges in a sweep of traffickers on western North Carolina tribal land. WLOS-TV via AP

Authorities arrested 76 people in and near Asheville and on Cherokee Indian tribal lands.

Timothy McCain, 30, and Carsen Elizabeth Byrd, 25, of Rowan County, were among those charged.

The charges were announced at a news conference Thursday.

“The scope and size of this investigation is indicative of the crisis we’re facing with heroin and opioids, methamphetamine, in our community,” said William Baxley, assistant special agent with the DEA.

Baxley said heroin and opioid use was once relegated to the inner city and large metropolitan areas, but not anymore.

“It crosses all strata of social, geographic locations,” Baxley said.

Indian communities have been hard hit by the effects of opioid use, he said. Officials said the arrests will hopefully serve as a warning that tribal communities will not tolerate opioid trafficking.

“The numbers are staggering, the impact is real, and the time for talk is over. … It’s time now for action,” said Bill Stetzer of the the U.S. Attorney’s Office.

“The message is clear: Indian country is off limits to drugs,” said U.S. Interior Secretary Ryan Zinke. “We will find you, we will hunt you down, we will prosecute you.”

Law enforcement officials said those arrested include a mix of people who live on the Eastern Band of Cherokee reservation and outsiders, according to the Associated Press. They said larger suppliers typically come from outside the area and work with local dealers.

The Eastern Band of Cherokees has nearly 16,000 enrolled members, more than half of whom live on the tribe’s 56,000-acre reservation in western North Carolina, according to its tribal enrollment office. The reservation, known as Qualla Boundary, is west of Asheville near Great Smoky Mountains National Park.

The investigation, which began in March, resulted in the seizure of more than 248 pounds of drugs with a street value of more than $2 million.

This was the eighth major opioid investigation undertaken by the Department of the Interior since Trump proclaimed a national opioid crisis.

“We’re going to continue this until the war is won,” Zinke said.

McCain will face state charges in Buncombe County. He is accused of two counts of possession of a firearm by a felon.
McCain has previously been charged in Rowan County with attempted robbery with a dangerous weapon, felony breaking and entering, and assault.

She is accused of conspiracy to sell and deliver heroin and fentanyl.

Byrd has previously been charged in Rowan County with larceny by servant or employee and obtaining property by false pretenses.