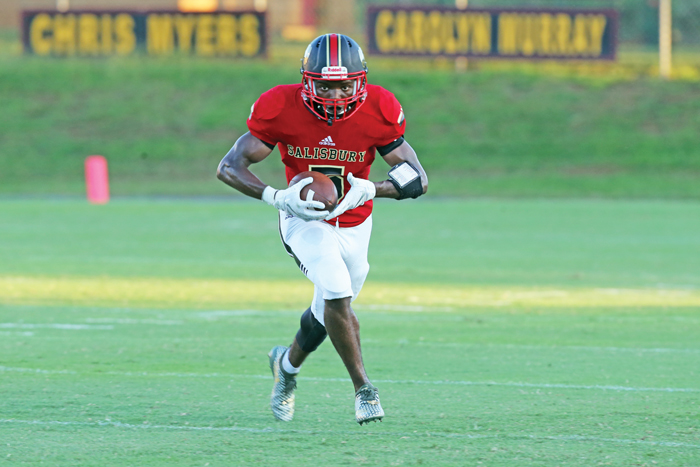 More evidence was submitted Friday night at Central Davidson, where the Hornets imposed their will and easily won their fourth straight conference game.

“We came out more focused than we ever have,” senior Cameron Gill said, after Salisbury coasted, 41-7. “We were ready to play. Now it’s all coming together for us.”

Salisbury’s running game found its legs — churning out a season-high 242 yards and scoring six touchdowns on the ground — while its defense forced two turnovers and limited Central to five first downs and 125 total yards.

“A lot of people underestimated us,” receiver Tyrone Johnson said, moments after the Hornets (4-2, 4-0 CCC) earned their third consecutive blowout win. “Dogs like us are hungry. We want to eat.”

They turned this one into an all-you-can-eat buffet, thanks largely to an offensive line that paved lanes wide enough to drive the team bus through. Running back Jahbreel Russell was the chief beneficiary, zigging and zagging his way for 140 yards and three touchdowns. Quarterback Mike McLean kept Central (1-5, 0-4) guessing with eight completions for a season-best 154 yards.

“The O-line never got pushed back,” said Russell, who scored three times in the second quarter. “They protected the quarterback and made room for me. I felt like I stepped up on a night when our other running back (injured Raheim Walker) couldn’t be here. I had to fill a big gap. Before the game, the coach said to me, ‘Let them know who you are. Let them remember you.'”

Russell stamped his signature on the night following a 10-yard punt by Central’s Jared Simon early in the second period. On first down from the Spartans’ 36-yard line, McLean found Jamarie McCollough for a 34-yard pickup. On second down, Russell plunged into the end zone.

“Getting that running game established was one of our goals,” said second-year Salisbury coach Brian Hinson. “Of course, Breel Russell made that happen by running the ball hard. He has that physical-player mindset that showed tonight.”

Three minutes later Russell took a handoff, shucked a number of tackles and scored on a 29-yard run to give Salisbury a 14-0 lead.

“Breel was acting like Breel,” McLean said. “He’s been holding back all year, but not tonight. He was reading blocks left and right.”

The Hornets overcame a pair of holding penalties on their ensuing drive, a 41-yard march capped when Russell shouldered his way into the end zone on a 1-yard burst with 3:53 remaining in the half. With two quarters to play, Salisbury had outgained Central, 236-14.

“That’s because our defensive line showed out tonight,” said junior linebacker Jabril Norman. “The linebackers hardly got any tackles because the D-line was on point.”

Central, predictably, had 14 running plays that either lost yardage or were stopped for no gain.

“Our defense has been a key all year,” Hinson noted. “After the first drive, we buckled down and our defensive line controlled the line of scrimmage with a five-man box most of the time. And our secondary, those guys scramble around and make things happen back there. It seems like our defense gets better each week.”

Salisbury’s defense zeroed in on its first shutout as the fourth quarter kicked off, only to be foiled when Central scored with 10:33 to play. A six-play, 84-yard scoring drive included three completions by sophomore quarterback Brody Stovall — including a 38-yard catch-and-run by running back Zane Trotter. Norman made a touchdown-saving tackle at the 1-yard line.

“I really wanted the shutout,” he said. “I burned my skin making that tackle.”

One snap later, Cole Stewart tumbled into the end zone for Central’s only score. SHS closed the scoring midway through the final period when Gill — a DB who had five TD’s on kick and punt returns in the Hornets’ previous two triumphs — returned an interception 49 yards for a touchdown.

“I was just in the right spot,” he said afterward. “Once I get my hands on the ball, I’ve got to score.”

“I challenged our defense to get a shutout and they came close,” Hinson concluded. “No disrespect to Central Davidson, but I told our guys this is the way we should win. The key is how we approach the game. Tonight they approached the game the way good teams do.”

NOTES: Gill’s touchdown was his sixth of the season. Russell’s were his first three. … Johnson had a 70-yard kickoff return after Central scored. He was wrestled to the ground at the 8-yard line, but a couple of costly penalties — Salisbury was flagged 14 times for 124 yards — sent the drive in reverse. … Sophomore Dontaz Witherspoon recovered a third-quarter fumble for the Hornets. … Hinson also praised the work of offensive linemen Carter Jenkins, Will Setzer, Chad Van der Poel, Zach Moten and Horacio Cruz. “This was their best game,” he said. … Salisbury celebrates homecoming next week when Oak Grove visits.