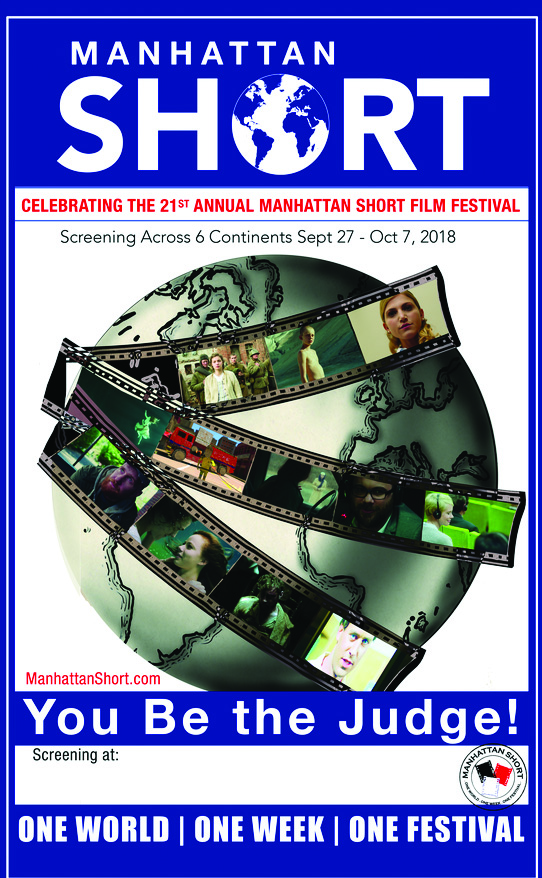 What’s better than a free film? A free film festival! Rowan Public Library will host the 21st annual MANHATTAN SHORT Film Festival Oct. 1-6. RPL is one of only seven N.C. locations to host this unique event.

Each RPL branch will host the MANHATTAN SHORT Film Festival. Headquarters (Salisbury) will host screenings on Oct. 2 at 6:30 p.m. and Oct. 6 at 2 p.m. East Branch (Rockwell) will host a screening Oct 3 at 5 p.m., and South Rowan Regional (China Grove) will host Oct. 1 at 6:30 p.m. Admission is free, and ages 18 and up are welcome.

This year, the MANHATTAN SHORT Film Festival features nine short films, with an overall approximate runtime of 128 minutes. This festival is unique because locations worldwide simultaneously participate over the course of a week. The runtime of each film varies, with most around 15 minutes; the shortest runs nearly nine minutes and the longest at a little over 18.

After the last film shows, audience members will vote for Best Film and Best Actor. RPL will send those directly to MANHATTAN SHORT headquarters. Every audience member’s vote counts. On Monday, Oct. 8, at 10 a.m., winners will be announced via ManhattanShort.com.

This is the second year in a row that RPL has hosted the film festival, and staff are excited to see its return. Jennifer Nicholson, Youth Services Supervisor, is looking forward to seeing this year’s nine finalists. “I really enjoy the international aspect of the nominated films,” she said. “While some of last year’s shorts were funny or quirky, many brought awareness to problems or serious issues based in real life [and in different cultures].”

Melissa Oleen, RPL Deputy Director, sees providing a free film festival that features independent films as a community service of sorts. “The great thing about an international film festival – and particularly one that features short films – is that it gives people the opportunity to experience several new perspectives and points of view over the course of only a couple of hours.”

Festival-goers will also be treated to a range of film genres, including intimate dramas, fast-paced animation, spine-tingling tales, a World War II epic, a film shot entirely underwater, and a comedy. This variety proved a winning point with last year’s audiences, including RPL Adult Outreach staff member Amanda Brill. “I enjoyed the diversity and the different cultures represented through films produced in other countries,” she said.

For 2018, eight countries are represented among the MANHATTAN SHORT finalists. There are films from Austria, Canada, Germany, Hungary, Kosovo, New Zealand, USA, and two from the United Kingdom. These Final Nine were selected out of 1,565 submissions from 73 countries.

“The number of submissions from across the world is a testament to the enduring vibrancy and creativity of short films,” said Gretchen Witt, supervisor of RPL’s Edith M. Clark History Room.

First launched in 1997 in New York City, the MANHATTAN SHORT Film Festival started out as a screen mounted to the side of a truck for about 200 attendees. Now, it’s grown to include more than 350 venues across six continents with a combined audience of over 100,000. Founding Director Nicholas Mason credits the public and its enthusiasm with creating the festival. In return, he consciously crafts the festival to appeal to all film-goers, from the casual to the dedicated, and to reinforce that every audience member’s opinion is equally valuable – hence the festival tagline, “You be the judge.”

“It’s a lot of fun to enjoy an evening of award-nominated films and then immediately cast your vote for your favorite film and actor,” said Witt. We’re looking forward to seeing what the festival judges – the audience members – decide this year!”

For more information about RPL and its hosting of the MANHATTAN SHORT Film Festival, contact Gretchen at Gretchen.Witt@rowancountync.gov or 704-216-8232 or visit www.RowanPublicLibrary.org

‘Peter Pan’ play asks what it means to be…