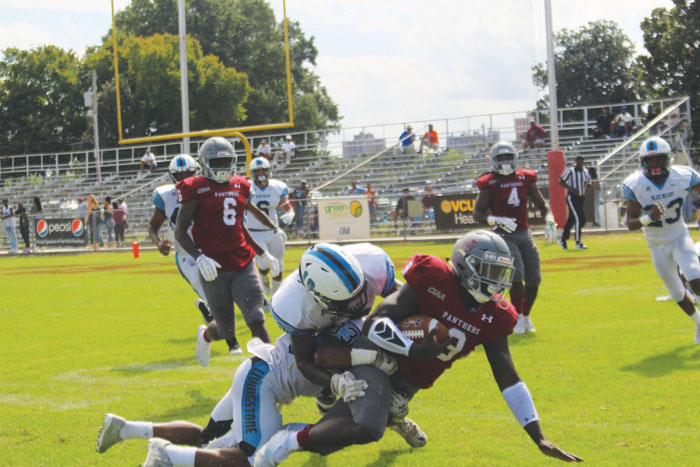 RICHMOND, Va. — Livingstone was in search of a three-game winning streak for the first time in four years here Saturday, but the chances for that went up in a puff of second-quarter smoke.

Virginia Union scored three touchdowns in a period of four minutes in the second quarter and went on to a 52-19 victory at Hovey Field.

The Blue Bears fell to 2-2 overall and 1-1 in the CIAA and will host St. Augustine’s in their homecoming game next Saturday at 1:30 p.m. Virginia Union improves to 3-1 and 2-0 in the league.

Union quarterback Darius Taylor was too much for the Livingstone defense, completing 21 of 33 passes for 331 yards and six touchdowns. The 6-5, 200-pound senior fired half of his TD tosses in the second period.

Taylor connected with receiver Marvin Fanfan for a score, just 40 seconds into that second quarter, putting the Panthers on top, 17-7. Livingstone answered right away, as quarterback Miles Hayes teamed with Anthony Faraimo for an 81-yard touchdown pass.

However, on the ensuing kickoff, the Panthers’ Jaiden Reavis sped 88 yards for a touchdown, and suddenly, it was 24-13.

Just over three minutes later, Taylor hit Lavatiae Kelly for a 34-yard TD pass and added a 45-yarder to Kewann Calloway at the 3:29-mark and Union led, 38-13.

Livingstone did respond just before halftime, as Hayes connected with Brandon Duncan on a 14-yard touchdown pass, completing a nine-play, 70-yard drive. The two-point conversion attempt failed and the teams went to halftime at 38-13.

Union shut out the Blue Bears in the second half and tacked on two more TD passes from Taylor. He connected with Olu Izegwire on a 39-yard scoring play in the third period and hit Kelly again for an 8-yarder in the final quarter.

Taylor had hit Izegwire for 29 yards for the game’s first score, just six minutes into the contest. Union kicker Jefferson Souza added a 26-yard field goal for a 10-0 first-quarter lead.

The Blue Bears cut the deficit to 10-7 with 2:35 remaining in the opening period as Hayes plowed over from the 1-yard line. Livingstone had driven 65 yards on nine plays for its first touchdown.

Union compiled 484 total yards during the game, with 351 of those coming through the air. The Panthers also rushed for 133 yards on 36 attempts.

Livingstone had 282 yards of offense with Hayes, a true freshman, leading the way. Hayes was 19 of 32 passing, for 205 yards and two TDs. He did not throw an interception. Hayes also led the Blue Bears’ rushing attack with 66 yards on 13 carries.

The Blue Bears only managed 79 total rushing yards on 29 attempts.

Ten different receivers caught balls from Taylor on his big day, with Calloway leading the way with four grabs for 91 yards.

Defensively, defensive back Keshawn Ward had 11 tackles for the Blue Bears, including eight solo stops. Two of his tackles were for losses, totaling 12 yards.

Another DB, senior Gregory Hines, picked off one of Taylor’s passes and returned it 64 yards. Hines also had three pass breakups.

The kickers and punters had excellent performances. Antoine Akundu, who does both for Livingstone, had seven punts for an average of 40 yards each.

Souza, Union’s kicker, was perfect with seven extra points and the one field goal while punter Russell Ballance averaged 46 yards on four punts.

NOTE: Saturday’s game was the last of four that saw defensive coordinator Rodney Hughey on the sideline as acting head coach. Daryl Williams, who sat out the first four games due to an athletic administration decision, returns in full capacity next Saturday against St. Augustine’s.