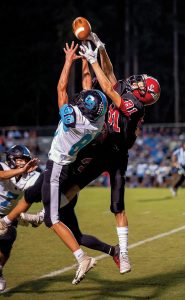 Punching in the decisive score on a physical run by Aiden Shewcow with 1:27 remaining, Oak Grove shattered hearts in the home bleachers with a draining 17-14 victory on a soggy field.

“That was a really good ballgame — if you like incomplete passes,” joked upbeat Oak Grove head coach Mark Holcomb. “Both teams played really hard. We’ve talked since the first day about sneaking into the playoffs, so this was an important one for us.”

Oak Grove (3-3, 2-2), a senior-less, second-year program playing varsity football for the first time, probably is headed for sixth or seventh in the 10-team CCC. Holcomb, who piloted North Davidson for many years, is doing a whale of a job in a challenging situation.

“We’re going to be the homecoming opponent for a whole lot of people this year,” Holcomb said. “The only way to stop that is by winning some of them.”

Huffman made it hard for the Grizzlies. He suffered a concussion in the blowout loss to Ledford two weeks ago and sat out the 40-point beating South took from North Davidson last week. But he came back, scrambled all over the place, showed a ton of guts, and made it thrilling. He threw scoring passes to Andrew Jones and Jarrid Nelson.

“Huffman played a great game,” Jones said. “We were so close to getting this one.”

Oak Grove has a 6-foot-5, 395-pound right guard (sophomore Matt Steadman), so it has a chance to move the ball on the ground against a lot of people. The Grizzlies possessed the ball more than South did and they put up more rushing yards and more passing yards than the Raiders.

“We gave up a couple of big plays,” South head coach Daniel Yow said. “That’s what hurt us most.”

Oak Grove seemed to have a receiver open deep every other snap, but the Grizzlies didn’t make connections very often. Mostly, they settled for Shewcow grinding out tough yards.

“I felt like we should’ve scored a lot more points than we did in the first half,” Holcomb said. “But we had some drops and we had some overthrows.”

A South gamble that failed led to the game’s first points. Facing fourth-and-2 at the Oak Grove 48, South could have punted and played field position, but kept its offense on the field. Michael Sloop carried, battled, and got about a yard and a half. The Grizzlies took over. A pass interference flag moved the ball inside the South 20, and Safin Coogle’s field goal made it 3-0.

With 5:42 left in the half, South finally broke through. Huffman completed a pass to Cameron Hurd in space, and Hurd’s wheels turned it into South’s most explosive play of the night to the Oak Grove 15.

From the 12, Huffman darted away from pursuing Grizzlies and threw the touchdown pass to Jones  on the left sideline that gave the Raiders a 7-3 lead.

“I was actually running a slant, but when I saw Drew was in trouble, I broke off the pattern and came back to him,” Jones said.

South probably should’ve gotten to halftime up, 7-3, because the Raiders’ defense forced an Oak Grove punt with 2:21 left in the half.

But South went three-and-out, a run for no gain and two incompletions that stopped the clock. The Grizzlies got the ball back with time, struck for a big pass play, and got their first touchdown when Shewcow barreled into the end zone 20 just seconds before the break. As the homecoming court took the field, the Grizzlies led 10-7.

“That last minute was big because it looked like we were going in to halftime ahead, and instead we’re down,” Nelson said.

Oak Grove controlled the line of scrimmage in the third quarter, but the Raiders always stiffened defensively when they had to. Oak Grove hurt itself on one promising drive with back-to-back flags for offensive pass interference and holding.

And then Hurd made another play. After a sack by Kolby Spencer forced Oak Grove to punt, Hurd nearly took the kick back all the way. Collecting the ball near his 25, he sprinted down the Oak Grove sideline to the Oak Grove 25.

Huffman got loose for a 13-yard run to set up first-and-goal at the 5. After two running plays were stopped by the Grizzlies, Huffman flipped his go-ahead scoring pass to Nelson on third down.

“I was lined up as the H-back, like it was the iso play we’d  been running,” Nelson said. “But instead of handing off, Drew ran a bootleg to his left.  I was wide open in the end zone.”

Huffman’s pass cleared the arms of a defender by inches with 10:32 left to play. The rest was easy. Maverick Page kicked an important PAT, and the Raiders led 14-10.

With 9:22 left, Oak Grove faked a punt on fourth-and-3 and Shewcow barged for the first down.

South needed to run the ball, needed to run clock, and that’s what it tried to do. Two carries by Sloop and a scramble and a dive by Huffman got 8 yards. With just over five minutes left, Jackson Deal punted for the eighth time.

“South’s triple-option isn’t easy to stop,” Holcomb said. “But we did a good job against the dive all night, but their quarterback made some plays on keepers. We wanted to make him pitch it.”

South’s defense needed one more stop to win the game, but couldn’t get it. Oak Grove calmly moved 74 yards under pressure.

Ian McGlamery, Oak Grove’s second QB, found Anthony Bowen down the middle for 40 yards, and he snagged it. Suddenly the Grizzlies were at the South 25.

From there they punched it inexorably toward the South goal line, as the clock dwindled. With 1:27 left, Shewcow marched into the end zone, and the visitors led 17-14.

“We had the middle shut down pretty well,” said Nelson, a linebacker on defense. “But they were able to get yards yards outside and they hit those big pass plays.”

And that was that.

“Huffman did a lot of good things and our special teams really helped us,” Yow said. “Hats off to a well-coached Oak Grove  team for playing a great game, but hats off to our guys as well. We fought all night.”

It was a crushing loss for South, which didn’t turn it over and got fierce defensive efforts from Sloop, Nelson, Remington Steele, Andrew Furr and Scott Stephens, among others.

“It hurts because we invested 100 percent,” Nelson said. “We were all in. Not just for ourselves, but for the guy beside us,  for everybody.”