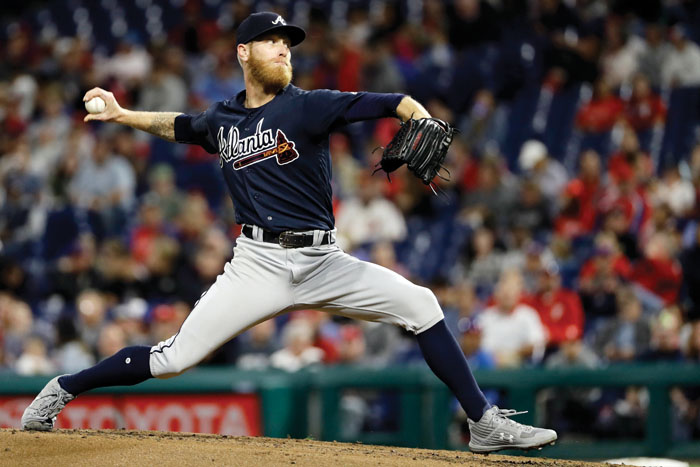 By AARON BRACY, Associated Press
PHILADELPHIA (AP) — The Atlanta Braves are savoring their turnaround.
Freddie Freeman hit three doubles in a four-hit performance and drove in three runs as the Braves kept up their push for home-field advantage in the playoffs, routing the Philadelphia Phillies 10-2 Friday night.
The NL East champion Braves improved to 90-70, coming off three straight seasons of at least 90 losses. They will face the NL West champion in the best-of-five Division Series — Colorado (90-70) leads that division and holds the tiebreaker over the Braves to host Game 1.
“This year has been unbelievable,” manager Brian Snitker said. “What we’ve accomplished, how we’ve grow, these guys should be proud of themselves. Ninety wins is hard to do. It speaks volumes to these players.”
Johan Camargo, who homered, and Ronald Acuna Jr. each had three hits for Atlanta. Mike Foltynewicz pitched five strong innings, a week after helping the Braves beat Philadelphia to clinch their crown.
“It’s been absolutely incredible,” Freeman said. “Every time we got knocked down, we got right back.”
Rhys Hoskins homered in the ninth for the Phillies, who dropped their ninth straight game to guarantee a losing season for the sixth straight year. They have been outscored 70-21 during the skid, including 49-9 over the last five.
Following games on Aug. 7, Philadelphia led Atlanta by 1 ½ games for first place in the NL East, standing 15 games above .500. But the Phillies (78-82) are 14-33 since and have fallen to third place, 12 games behind the Braves, and four games under .500.
Manager Gabe Kapler was soundly booed throughout the evening. As is his wont, Kapler focused hard on the positives and praised the way the Phillies battled to the end.
“We didn’t play well enough to win tonight’s baseball game and we’ve been playing terrible baseball,” Kapler said. “That’s why we’ve lost a lot of games. Not because we haven’t fought or because anybody quit.”
Foltynewicz (13-10) allowed one run on one hit with nine strikeouts and no walks.
“It was a good way for him to finish the regular season and get ready for the next step,” Snitker said.
Jerad Eickhoff (0-1) made his first start since last Aug. 30 and tied a franchise record held by Curt Schilling and Hall of Famer Steve Carlton by striking out seven straight batters. The right-hander followed his seventh strikeout by surrendering Camargo’s solo homer in the fourth and a single by Ozzie Albies, ending his night.
Kapler heard it from the crowd of 24,306 when he removed Eickhoff after just 56 pitches and for subsequent pitching changes. Eickhoff’s season ended last year due to nerve irritation in his right hand and he was sidelined until Sept. 2 of this season due to a right lat strain. He allowed two runs on five hits with eight strikeouts and no walks in 3 1/3 innings.
“It would have been irresponsible to push him significantly beyond what he was ready for,” Kapler said.
After Eickhoff left in the fourth, the Braves scored three runs on run-scoring singles by Charlie Culberson and Acuna off Edubray Ramos.
Philadelphia got a run back in the bottom half on Odubel Herrera’s RBI double.
After a Phillies error in the seventh, their 122nd of the season, helped Atlanta go up 5-1, the Braves scored three more in the eighth on Freeman’s two-run double and Ender Inciarte’s RBI single.
FOLTYNEWICZ’S FANS
Foltynewicz finished the regular season with 202 strikeouts, becoming the sixth pitcher in Braves history to reach the 200-strikeout milestone and first since Javier Vazquez had 238 in 2009.
HOSKINS’ HOMERS
Hoskins upped his season total to 34 homers, the most for a Phillies player since 2009, when Ryan Howard (45), Jayson Werth (36) and Raul Ibanez (34) all had at least that many.
TRAINER’S ROOM
Phillies: Philadelphia is the only team in baseball without a player on the DL. According to the Phillies, it would be the first time since at least 1994 if they finish the season without a player on the DL.
UP NEXT
Phillies RHP Aaron Nola (16-6, 2.45) makes his final start when he opposes Braves RHP Anibal Sanchez on Saturday night.
___
More AP baseball: https://apnews.com/tag/MLBbaseball and https://twitter.com/AP_Sports