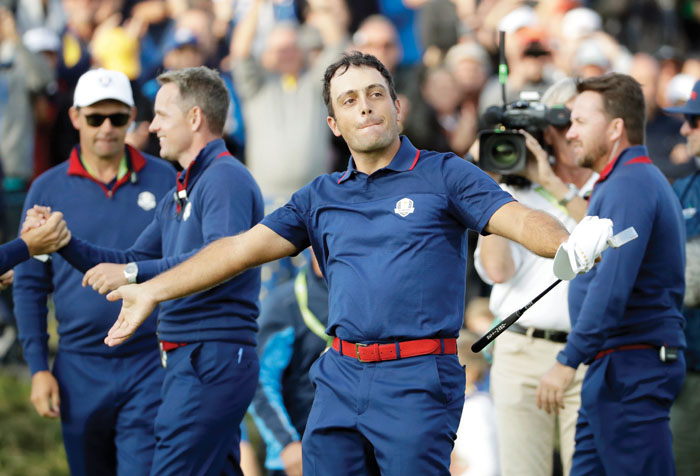 Europe's Francesco Molinari celebrates after winning a foursome match with his partner Tommy Fleetwood on the opening day of the 42nd Ryder Cup at Le Golf National in Saint-Quentin-en-Yvelines, outside Paris, France, Friday, Sept. 28, 2018. Molinari and Fleetwood beat Justin Thomas of the US and Jordan Spieth 5 and 4. (AP Photo/Matt Dunham)

By DOUG FERGUSON, AP Golf Writer
SAINT-QUENTIN-EN-YVELINES, France (AP) — Three matches in the books, three red points on the board, and Tiger Woods was still on the golf course.
This was exactly the start the Americans wanted in the Ryder Cup.
And then Europe finished even better.
Four hours later, the cheers at Le Golf National ramped up to a feverish pitch as Europe swept all four matches Friday afternoon for a 5-3. It was the first time Europe swept a session since 1989, and the first time ever at the Ryder Cup in foursomes.
“We didn’t come here to win the foursomes,” Francesco Molinari said. “We came here to win something else.”
Molinari and Tommy Fleetwood were the only Europeans to play both matches, and they won them both. They combined for five birdies over their last seven holes to polish off Woods and Patrick Reed and salvage something from a morning that belonged to the Americans. They took down Jordan Spieth and Justin Thomas in the afternoon.
“It was a bit of a roller-coaster ride,” European captain Thomas Bjorn said. “We know it’s a marathon, and we’re delighted with the way the day turned out because it was a fairly tough morning. We go home happy tonight, but we refocus and look forward to tomorrow.”
The change was noticeable in the body language.
The Americans walked tall and had reason to feel as though nothing could go wrong, especially Tony Finau. It was his amazing fortune that turned the tide in the morning. He and Brooks Koepka were 1 down to Justin Rose and Jon Rahm on the par-3 16th when Finau’s 8-iron appeared headed for the water. Instead, it landed on the 12-inch wide boards that frame the green, soared into the air as the gallery gasped, and plopped down 3 feet from the hole.
They wound up winning on the 18th when Rose hit into the water, the only time Finau and Koepka led all match.
In the afternoon, the mood changed in the mild air and freshening wind. Spieth was shaking his head after all those putts that dropped in the morning slid by the edge of the cup in the afternoon. Ian Poulter’s eyes grew wider with each hole he won with Rory McIlroy in the afternoon.
“You see a change in body language,” U.S. captain Jim Furyk said. “I’m sure the Europeans’ body language significantly changed to all smiles and boisterous and hugs and high-fives, and I’m sure the looks on some of my players were not quite the happiest, and dead opposite this morning.”
Furyk tried to see the big picture.
“It was four points out of 28 that we played for,” he said. “We are not happy with it. I think we use it as motivation tomorrow.”
The Americans are trying to end 25 years of losing the Ryder Cup in Europe, and for one morning, it looked as though this might be the time. By the end of the day, the Americans were seeing blue, and plenty of it.
Europe took the lead in every foursomes match and never let up. Rose teamed with old partner Henrik Stenson and dismantled Dustin Johnson and Rickie Fowler by winning five holes in a seven-hole stretch.
Right behind them, McIlroy recovered from his awful morning by joining forces with European stalwart Poulter, who lived up to his reputation. They were 2 down early until Bubba Watson and Webb Simpson collapsed by losing four straight holes, three of them with bogeys.
Phil Mickelson missed his first opening session since his rookie year in the Ryder Cup, and he was missing while in action during the afternoon. Mickelson and Bryson DeChambeau were 7 down at the turn and did well to at least get to the 14th hole, where Sergio Garcia and Alex Noren closed them out.
But this was more about Europe’s great play. Garcia and Noren were 5 under at the turn, an astounding score on his golf course in these windy conditions.
Thousands of fans, some of whom managed to get a seat for the opening tee shot in the grandstand that holds just under 7,000 surrounding the first tee, left Le Golf National chanting, cheering and singing over this wild turn of events.
Many would have been happy for Europe to keep it close, especially after Finau’s big break. The gallery was so stunned that it booed Finau as he approached the green, and he paused before rapping in the short birdie putt.
“We’ll take the breaks where we can get them,” Finau said. “We needed one there.”
Behind them, Thomas and Spieth lost a 3-up lead, and then Thomas holed a 6-foot birdie putt on the 15th hole to go 1 up. Spieth polished off their victory over Paul Casey and Tyrrell Hatton with a 3-foot par putt on the 18th.
In his return to the Ryder Cup for the first time since 2012, Woods quickly added to his losing record. Five days after Woods won the Tour Championship for his first victory after four back surgeries, he and Patrick Reed went cold at the end.
They were 2 up until Molinari and Fleetwood went to work with a pair of Molinari birdies to tie the match, a pair of Fleetwood birdies to take the lead, and one last birdie putt from Molinari to finish them off.
The key moment was at the 15th, where Woods was in the left rough. Because of water surrounding the green, Woods told Reed he would lay up and make 4 to at least stay in the hole. Reed hit into the water, and Woods never had a chance at par. Fleetwood holed a 15-foot birdie from the fringe for the lead, and then the Englishman made a 35-footer on the next hole.
“They put it on us, and we couldn’t answer,” Woods said.
At least they have Saturday, when Furyk is sending out the same teams and can only hope for similar results to Friday morning.
___
For more AP golf coverage: https://apnews.com/tag/apf-Golf and https://twitter.com/AP_Sports