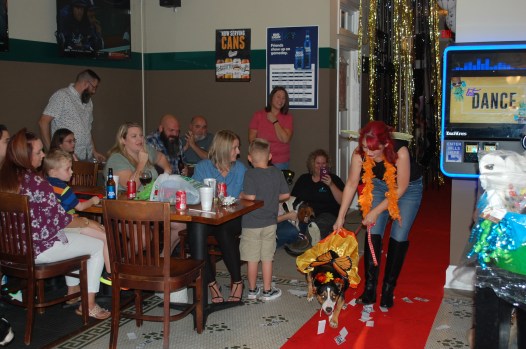 Tallulah walks down the runway as her owner fixes her costume. Strut Your Mutt was a fundraiser for The Halfway House Animal Rescue on Sept. 28 at Bella's Ales and Tails. 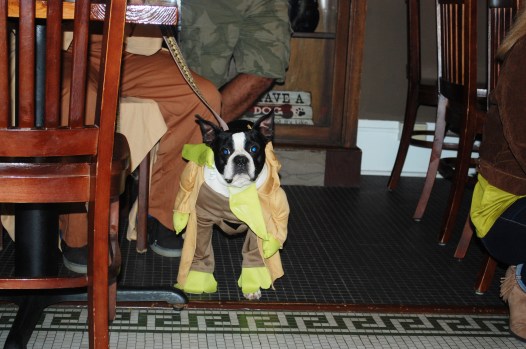 Maason, a Boston terrier, wears a Yoda costume before walking down the runway during the Class Clown competition. Strut Your Mutt was a fundraiser for The Halfway House Animal Rescue on Sept. 28 at Bella's Ales and Tails. 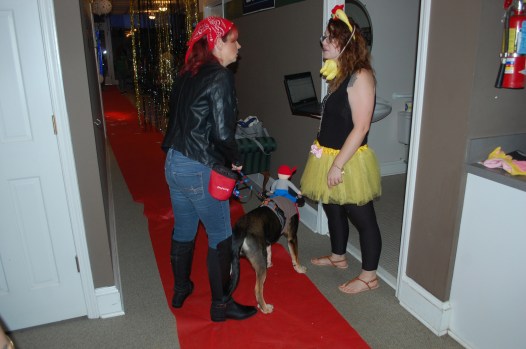 Tracey Kyles talks to a participant before she walks her dog down the runway. Strut Your Mutt was a fundraiser for The Halfway House Animal Rescue on Sept. 28 at Bella's Ales and Tails. 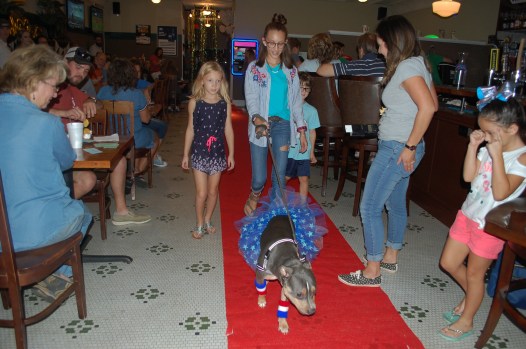 Skeigh models during the sports category. Strut Your Mutt was a fundraiser for The Halfway House Animal Rescue on Sept. 28 at Bella's Ales and Tails.

CHINA GROVE — At Bella’s Ales and Tails, the owners led their dogs down a runway for the Strut Your Mutt Dog Fashion Show on Friday night.

Dog owners drank beer and showed off their dogs to raise money for Halfway House Animal Rescue. Tracey Kyles, who organized the show, said she wanted to do a fundraiser that people would remember.

“Whenever I think of events to plan, I want something really fun and something really memorable, and I haven’t seen a lot of people do fashion shows with dogs. So I thought that would be really great to get the community involved,” Kyles said. “The entry fee is donated right back to the rescue. That helps with our enormous vet bill.”

For a $10 entry fee, participants could model their dogs in three categories: best dressed, class clown and sports.

Nala, who is owned by Courtney Jarbis of China Grove, won the sports award wearing a University of Tennessee jersey. Nala also participated in the other two categories wearing an AC/DC costume for best dressed and a lion’s mane for class clown.

“The lion was really cute, but I was scared she would pull it off,” Jarbis said.

Jarbis said she comes to corn hole tournaments at Bella’s Ales and Tails. That’s how she learned about Strut Your Mutt.

She said next year, she will bring her other dog.

The crowd clapped and cheered throughout the night as owners strutted down the runway to music like “Who Let the Dogs Out?” and “Walk the Dog.” Dogs wore a range of costumes, including a piñata, Playboy bunny and a cow.

“At the end of the day, I thought of things that I would really enjoy,” Kyles said. “I would enter into something with my dog, and so a fashion show seemed like a really fun idea.”

Kyles said she plans to make the show a tradition and hope to continue to make it better.

“This is our first run,” Kyles said. “We knew we would have some kinks and things that wouldn’t flow as well as we initially thought. Honestly, overall everything went great. The dogs walked right down the runway. There were no issues.”

Money from part of the draft sales, all the entry fees and a gift basket raffle went to benefit Halfway House Animal Rescue.

The animal rescue will host a fundraiser from 10 a.m. to 2 p.m. Oct. 20. The Monster Mash Halloween Party for Dogs and Owners will be at Hot Diggity Dog in Gold Hill.