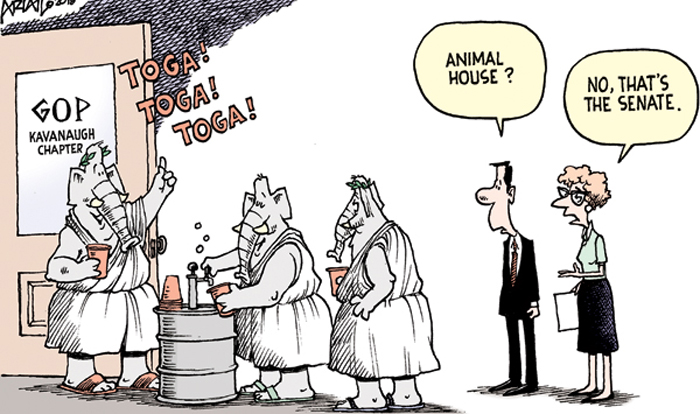 Where do Republicans place a higher priority: on confirming Brett Kavanaugh to the Supreme Court or retaining their majorities in Congress?

Clearly the GOP puts Kavanaugh first and is determined to “plow right through” all obstacles to his elevation, as Majority Leader Mitch McConnell put it.

From a long-range perspective, that decision makes sense. Since Kavanaugh is up for a lifetime appointment, and he’s only 53, he could swing the court rightward for a generation. But in the short run, President Donald Trump and his allies could pay a large price for betting on Kavanaugh.

GOP strategist Alex Castellanos says a “pink wave” was already gathering force, fueled by the president’s long history of brutish behavior toward women. The accusations of sexual misconduct now bruising Kavanaugh can only inflame women voters and shift their motivating message from “Me Too” to “Not You.”

“The antipathy to Trump from women — college-educated, white suburban women — transcends anything I’ve ever seen in politics,” Castellanos told The Washington Post. “And it’s not just against Trump’s policies, of course. It’s against Trump as the 1960s ‘Mad Men’ alpha male. It’s Trump who grabbed women where he shouldn’t. Women are coming out to vote against Donald Trump because they see him as a culturally regressive force that would undo the women’s march to equality.”

For Republican leaders, however, the lure of longevity outweighs that danger. Justice Clarence Thomas won confirmation by only two votes, and yet 27 years later, he’s still the court’s conservative anchor.

What happens at the polls this year can be corrected in 2020, but the vote on a justice can never be reversed or revisited.

Another incentive to stick by Kavanaugh: the president’s political persona is defined by two words: “strong” and “win.” If his nomination fails, Trump looks like a weak loser — his worst fear.

Moreover, the Supreme Court, more than any other issue, energizes Trump’s base of support. Exit polls in 2016 show that for 1 in 5 voters, the court was the “most important issue” determining their vote, and those folks backed Trump by a wide margin: 56 percent to 41.

Since the Roe v. Wade decision legalized abortion in 1973, conservatives have focused on the importance of the Supreme Court. The political system has repeatedly failed to reconcile the most contentious social issues facing the country, from abortion and same-sex marriage to affirmative action and the role of religion in public life. That’s why the courts, not Congress, have been the forum for resolving those issues, and why conservatives — particularly religious conservatives — care so deeply about the court’s makeup.

Trump often says that his promise to appoint orthodox right-wing judges was a key factor in the election, and he’s right about that. One in 4 voters in 2016 identified as evangelical Christians, and 80 percent of them backed Trump.

But if the court issue galvanizes Trump’s base, it potentially alienates swing voters and fuels the “pink wave” Castellanos talks about. A Fox News poll shows that 50 percent of all voters now oppose Kavanaugh, up from 46 percent in August, with only 40 percent in favor. This marks the first time in modern polling that a Supreme Court nominee is “underwater” with more voters in opposition than in support.

This shift is caused primarily by women, who now oppose Kavanaugh by 55 percent to 34 percent. Among white, college-educated women, the margin climbs to 60 to 34. The latest NBC/Wall Street Journal poll reaches a similar conclusion and points to other critical groups that have shifted against Kavanaugh since August: women over 50 have gone from a 3 percent margin in favor to a 7 percent margin against; independents have swung from plus 15 to minus 16.

The overall generic ballot reveals an astounding gender gap: Men favor Republicans for Congress by 3 points, 47 to 44; women back Democrats by 25 points, 58 to 33.

“Americans are hitting the brakes in a midterm and trying to send the signal that they’re not satisfied,” says GOP pollster Bill McInturff, who helped conduct the survey. His Democratic partner, Fred Yang, adds, “The public is clearly saying, once again, they want to shake up the status quo.”

The ingrained American impulse for change, which helped boost Barack Obama and Donald Trump in three successive elections, is now turning against the incumbent. The passion Hillary Clinton could never ignite is now burning brightly. And the Kavanaugh nomination is only encouraging women to feed those flames of resistance.