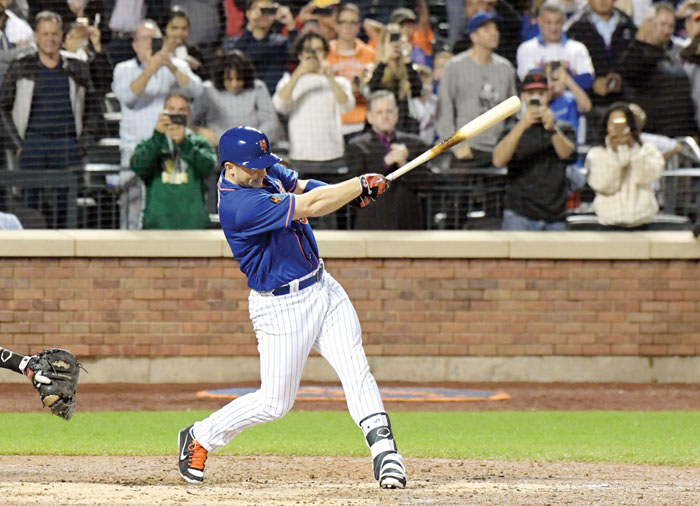 New York Mets pinch-hitter David Wright grounds out during the fifth inning of the team's baseball game against the Miami Marlins on Friday, Sept. 28, 2018, in New York. (AP Photo/Bill Kostroun)

NEW YORK (AP) — David Wright has made it back into a major league game, grounding out in his first plate appearance for the New York Mets in nearly 2½ years.
Sidelined by neck, back and shoulder injuries since May 27, 2016, Wright came up as a pinch-hitter Friday night against the Miami Marlins and immediately took a cut. Leading off the bottom of the fifth inning, he swung at the first pitch he saw, a 96 mph fastball from Jose Urena.
With his wife and two young daughters in the stands, the 35-year-old Wright hit a bouncer to the left of third baseman Brian Anderson, who made a nifty pickup of a short hop and threw across the diamond to retire Wright. The Mets’ captain returned to the dugout with a big smile on his face, where he high-fived and hugged several teammates.
Wright is scheduled to start Saturday night against the last-place Marlins in his farewell game before a sellout crowd at Citi Field. Unable to overcome all the injuries, he says he expects this weekend to mark his final appearance in the big leagues.
___
More AP MLB: https://apnews.com/tag/MLB and https://twitter.com/AP_Sports