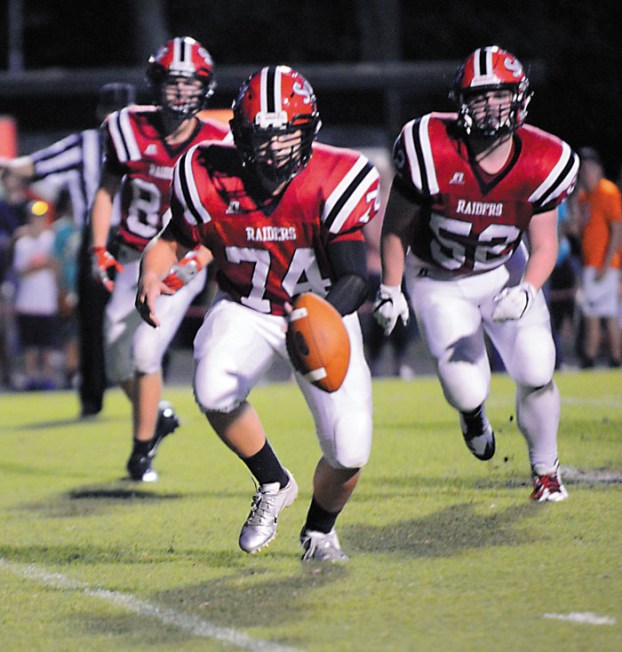 South Rowan's Remington Steele 74 chases down a blocked extra point attempt during an earlier game. The Raiders host Oak Grove on Friday. Photo by Wayne Hinshaw, for the Salisbury Post

As the Hornets prepared to play Providence Grove to close out a perfect regular season and celebrate a CCC championship, the news of the forfeits broke. It was official by Nov. 7.
Those four forfeits were all CCC losses, so overnight, Salisbury went from 6-0 in the eight-team CCC to 2-4.
West Davidson, a stout team that had lost to Salisbury, 16-8, in a fierce struggle, would win the league outright with a 6-1 record.
To their credit, the Hornets went out and destroyed Providence Grove, 64-7, in their last regular season game, shoving the ball with serious anger for 468 rushing yards. There was no running clock in those days, but on that night, they needed one.
After Providence Grove, Salisbury was officially 7-4 overall, but only 3-4 and an also-ran in the CCC. The Hornets did make the 2AA playoffs, but instead of being a No. 1 or No. 2 overall seed (Reidsville was 11-0), the Hornets were seeded 11th. That meant a long road trip to the mountains to play No. 6 Pisgah, where the Hornets came up short, 17-14. Looking back on it,  the Hornets just didn’t have anything left in the tank emotionally.
In 2009, in the third round of the 2AA playoffs. Salisbury went back to Pisgah and buried the Black Bears, 35-7, so I think the Hornets also win a 2008 meeting with Pisgah under normal circumstances.   That 2009 Salisbury team was the one that came up an inch short of the goal line on the final play against Newton-Conover in a 2AA semifinal.
The 2010 Hornets rolled to the 2AA state championship with players such as Knox, Morris, Darien Rankin and Keion Adams, while West Rowan was taking its third straight 3A title and carrying its epic winning streak, the nation’s longest at the time, to 46 games.
In 10 seasons (2003-12), even with those forfeits, Pinyan’s Salisbury teams won 100 games.
The unfortunate forfeits of 2008 may have changed the perception of county football history. When people reminisce about that talented era of high school football in Rowan, they talk almost exclusively about West Rowan, the amazing Parks, the crazy streaks, the three consecutive titles. But the Hornets were awesome as well, not quite as powerful as West, which won head-to-head confrontations with the 2009 (barely) and 2010 Hornets, but fast and furious and great in their own right. They shouldn’t be forgotten.
•••
It’s a relatively quiet Friday, with East Rowan, Carson, A.L. Brown and Davie County all in their open week.
North Rowan finally returns to action at South Stanly to start Yadkin Valley Conference play. West Rowan plays its final non-conference tuneup at Cox Mill. As mentioned, Salisbury is at Central Davidson for a CCC game, and South Rowan is home against Oak Grove in a CCC game.
The picks were 6-0 last Friday — it was an easy week — and are 24-7 for the season.
South Rowan 20, Oak Grove 19
It looks like an even game. The only common opponent so far has been North Davidson. South (1-4, 1-2) lost to the Black Knights, 46-6, while Oak Grove (2-3, 1-2), a second-year school playing varsity football for the first time, lost, 35-0.
Oak Grove won its first ever CCC game by a point against Central Davidson (1-4, 0-3)  last week.  South won against East Davidson (1-4, 1-2) on Sept. 7, but was blown out by Ledford and North Davidson, the league’s bullies, on the road the last two weeks.
Salisbury 31, Central Davidson 7
It’s still early, but the CCC again looks extremely top heavy (North Davidson, Ledford). The Hornets (3-2, 3-0), who prevailed at Thomasville in a challenging game, have won three in a row and appear to have a clear path to a top-three finish in the 10-team league. Salisbury has scored a modest 112 points, but it’s defense has allowed only 86. Central Davidson has lost four in a row, and the Spartans’ offense is likely to be overwhelmed by Salisbury’s tenacious defense. It will be interesting to see if Central kicks the ball within a mile of Cameron Gill, who has five return TDs the past two weeks.
Central’s lone win came at the expense of Atkins (0-6).
Salisbury smashed the Spartans, 58-0, last season and haven’t lost on the field to Central since 2002.
Cox Mill 33, West Rowan 24
This looks winnable for the Falcons, but Cox Mill has to be favored.
Both teams are 3-2. There are no common opponents to this point.
West is 2-1 on the road, winning at North Rowan and Davie County, but the Falcons didn’t fare well at A.L. Brown.
Both teams have played solid schedules. The two losses for the Chargers have been to 4A North Meck (5-1) and Hunter Huss (5-0). Huss is the program that ended West’s 2017 season in the first round of the 3A playoffs.
The key player may be Cox Mill defensive lineman Terrell Dawkins, a 6-4, 235-pound N.C. State commit. In track and field, Dawkins throws the discus and shot and runs the 100, which gives you an idea of what kind of athlete he is. Can West block him? We’ll see.
For non-conference, it’s an important game for West. It would be uplifting to come out of the non-conference portion of the schedule at 4-2, instead of 3-3.
The all-time series  is 2-all. The Falcons whipped Cox Mill, 21-3, in the most recent meeting in 2016.
North Rowan 28, South Stanly 14
Rested or rusty? Seventh-ranked North Rowan (3-1) will find out tonight, taking the field for the first time in 21 days.
Both teams are definitely top-four squads in the eight-team Yadkin Valley Conference, so this is a key one for the Cavaliers.
South Stanly  (3-2, 1-0) got YVC play started last week with a 56-0 yawner against South Davidson.
South Stanly head coach Ryan Ochier is a former defensive coordinator at Salisbury and Thomasville, so he’s familiar with the Cavaliers and what they like to do.
South Stanly is a running team, throwing about 25 percent of the time. North’s strengths on defense are sure-tackling linebackers and athletic safeties, so it’s a pretty good matchup for the Cavaliers.
South Stanly’s losses were to East Rutherford (5-0) and West Stanly (3-2).
North holds a 4-1 lead in the all-time series, but it was fortunate to win, 20-19, last year. South Stanly’s lone victory in the series came in 2011.
You Might Like