Groups stop in Salisbury to educate voters about constitutional amendments 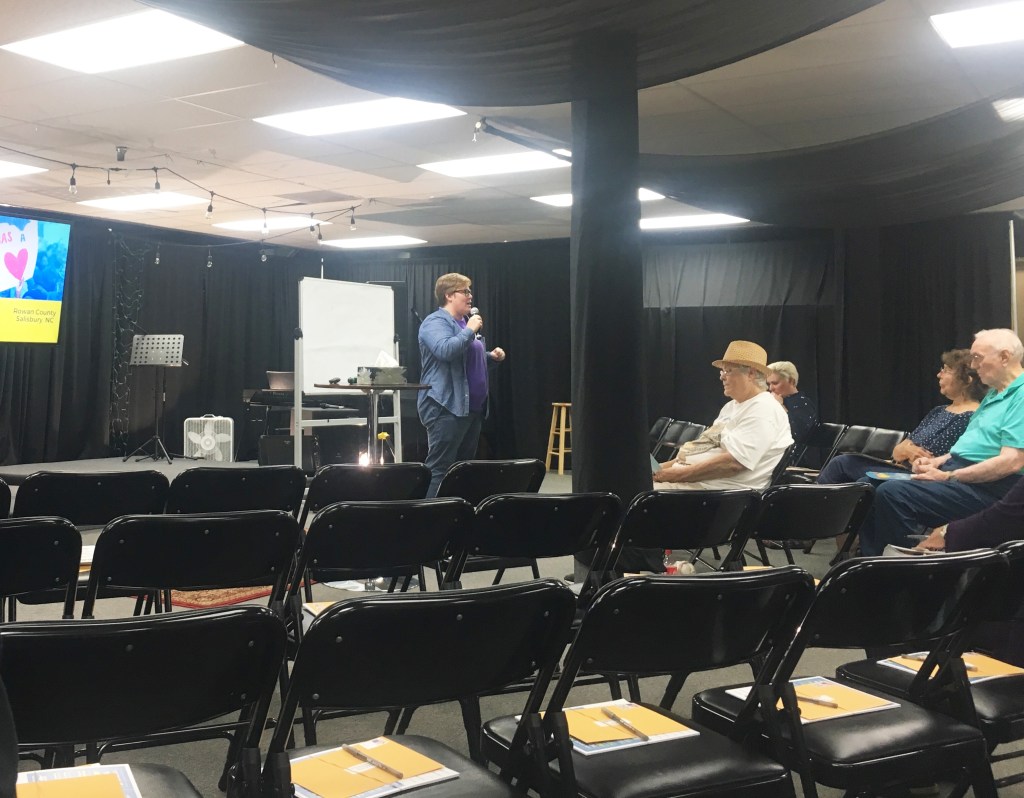 Jen Jones, the director of communications and digital strategy for Democracy NC, talks to the audience about encouraging them and other voters to vote against the constitutional amendments on the ballot as a part of the Protect Our Constitution Tour at Mission House, on Sept. 27, 2018.

SALISBURY — Democracy N.C. and seven other groups stopped in Salisbury on Thursday night as part of their Protect Our Constitution tour to offer information about the six proposed constitutional amendments on the November ballot.

The program was held at Mission House.

Jen Jones, director of communications and digital strategy for Democracy N.C., broke down what she said the amendments would mean for North Carolinians. She said one out of 10 people in the state knows about the amendments and called on members of the audience to educate the other nine.

Working in reverse order, speakers talked about the impact the amendments may have, noting they are uncertain what the N.C. General Assembly will do if voters approve what some called a “power grab by the legislature.”

Laura Wright of the Southern Coalition for Social Justice talked about Amendment 4 and the potential parallels it could have to the voter ID laws in 2016.

“That’s no accident the court found when they struck down voter ID bill that it was designed with surgical precision to prevent African-Americans from voting,” Wright said. “It’s no different this time. They’re just trying to make us the ones that do it so they’re not the ones holding the smoking gun.”

Jones said legislators will say “it wasn’t us, it was the voters” if they pass laws under the amendments, similar to a previous amendment banning same-sex marriage.

“It was a vague amendment, extreme amendment that was used to marginalize one group in order to turn out one base,” Jones said. “Eighteen months later, it was overturned. It was struck down as a violation of people’s equal protection rights.

“I got married in the interim in D.C., not in my home state,” Jones said. “For 18 months, I looked at everyone around me a little be different. They can vote against my rights, and that didn’t feel very good in the state. Imagine you can’t vote for 18 months while we wait for the litigation to happen. They came for me in 2012. Now they are coming for all of us.”

Jones said the amendments will affect people’s money, contending that Amendment 3 could lower the cap on income taxes and prevent the state from taxing the wealthy. Amendment 2 would require millions to implement, she said.

Jones said the call to vote against the constitutional amendments isn’t partisan, saying former governors of both parties have opposed some of the proposals.

“We are not an anti-hunting and fishing organization,” Jones said. “We are people who defend voters in their state. We are out saying vote against all six. We have concerns about all six because we care that voters know what they are voting on.”

Salisbury was one of the stops for the Protect Our Constitution Tour, which is traveling to major cities and rural towns across North Carolina ahead of the November election.