Flooding in Florence’s final stand not as bad as feared 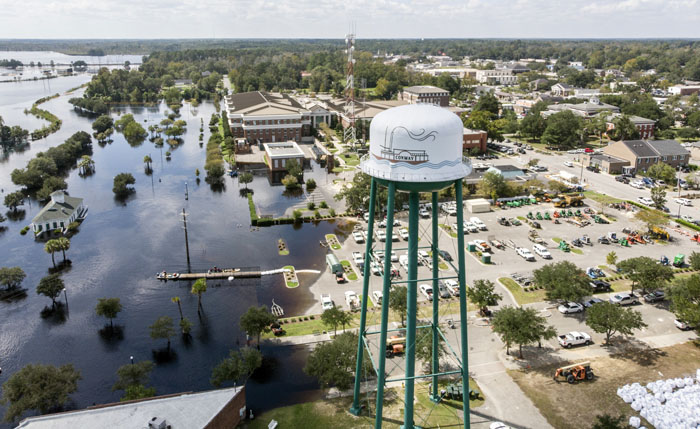 GEORGETOWN, S.C. — Hurricane Florence’s floodwaters should reach their final peak before heading into the Atlantic Ocean on Saturday, and they aren’t as high as once feared in parts of South Carolina.

The Waccamaw River should crest at record levels Saturday but will be well below the destructive forecasts from earlier in the week, Georgetown County Emergency Management said in a Facebook post Friday.

The river is influenced by tidal flow, so it will recede at low tide before reaching the record at high tide, officials said.

Officials feared flooding that would top highway bridges and inundate areas that had never flooded since Georgetown was founded before the Revolutionary War, but that has yet to materialize. Still, floodwaters are expected to end up in hundreds of buildings, officials said.

Upstream in Conway, the Waccamaw River was finally starting to drop after rising for well over a week. But Friday, the river remained nearly 2.5 feet above its previous record of 17.9 feet set after Hurricane Matthew in 2016 and likely won’t drop below that level until Tuesday.

Most of the nearly 1,000 homes and businesses flooded in and near the city of 23,000 will remain that way into next week, officials said.

“We are just encouraging people to be patient. We know lives have been turned upside down,” Horry County Emergency Management Director Randy Webster said.

On Monday, road crews will begin tearing down the concrete walls, plastic sheeting and sand that successfully kept floodwaters from topping two bridges that carry U.S. 501 — the main route to Myrtle Beach — over the river, the South Carolina Department of Transportation said Friday.

In North Carolina, residents of a flooded Pender County neighborhood are using a nearby soccer field as a staging area for donations, and a half dozen families are sleeping there in recreational vehicles or tents.

Sarah Robles, who’s staying nearby with her father after her house flooded, said she’s helping to run the soccer field operation to distribute donated items and hot meals at the soccer field to families displaced from the Cross Creek neighborhood.

“We have big storage bins and stuff,” she said. “We have a tent that has things and everyone comes to get their stuff like Clorox, cleaning supplies, health and beauty, you know, deodorant, new toothbrushes to snacks, ice, drinks.”

She said the six to 10 families sleeping on the field, along with her neighbors, have struggled to find temporary or transitional housing. She said those with space are raising prices.

“None of us can find housing, and when people do have houses, they’re racking up the rent prices,” she said.

Groups stop in Salisbury to educate voters about constitutional…