Band of Nomads: CCU displaced due to Hurricane Florence 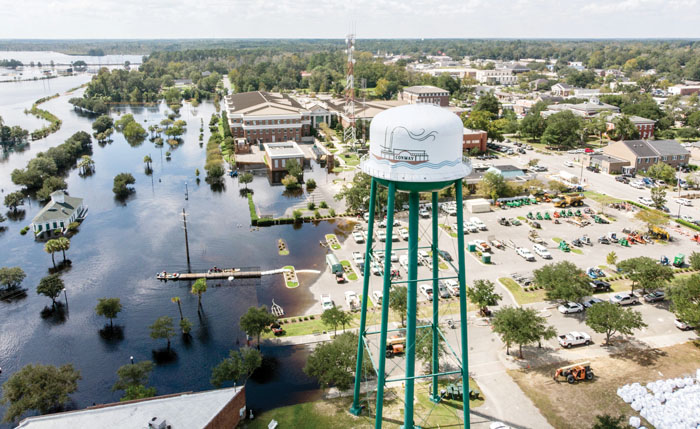 FILE - This Wednesday, Sept. 26, 2018, file photo shows an aerial view of floodwaters from the Waccamaw River in downtown Conway, S.C. The Coastal Carolina football team has not practiced at home in Conway, S.C., in nearly two weeks. The Chanticleers are living out of hotel rooms and practicing on high school fields, displaced by Hurricane Florence. Yet, the team has won both games disrupted by the storm.(Jason Lee/The Sun News via AP, File)

COLUMBIA, S.C. (AP) — Coastal Carolina’s C.J. Brewer wasn’t sure what to think nearly two weeks ago when coaches told him campus was closed and the Chants were busing out of South Carolina with Hurricane Florence churning offshore.

“It was a little bit crazy,” Brewer, a sophomore starter at defensive tackle, told The Associated Press by phone. “But we hung together.”

The Chanticleers certainly have, winning twice at Campbell and Louisiana-Lafayette despite getting displaced by the storm and trekking through four states to stay dry and out of harm’s way. Coastal Carolina (3-1, 1-0 Sun Belt Conference) has already won as many games in the FBS this season as all of 2017 when it went 3-9.

“Yes, there were things for us to overcome and worries about family and friends,” Chants coach Joe Moglia said. “But at the same time, you’ve still got to handle it.”

There was plenty to handle. Two weeks ago, Florence was a growing mega storm in the Atlantic Ocean projected to hit near South Carolina’s Grand Strand resort region, which is about 10 miles east of Coastal Carolina’s campus.

When South Carolina Gov. Henry McMaster ordered state agencies closed on Sept. 10, that included state university Coastal Carolina and Moglia had quick decisions to make. The team’s upcoming Saturday home game with Campbell was moved to the Camels’ campus in Buies Creek, North Carolina and moved up to Wednesday afternoon. So Moglia gathered his coaches and players on a fleet of five buses bound for Raleigh, North Carolina.

What about our families? Moglia was asked, he recalled. So families came along. How about pets? some continued and Moglia agreed. So a Noah’s Ark of about more than 100 hundred people “13 dogs, five cats and a fish,” Moglia joked, set out on one of college football season’s longest — and most successful, so far — road trips.

In front of an afternoon crowd of 2,000 fans, Coastal topped FCS opponent Campbell 58-21 and immediately boarded the buses for what became a 10-hour trek to Jacksonville, Florida.

The North Florida city became the Chants home the next nine days. Meetings were held in cramped hotel conference rooms. Projectors shared between position groups as film sessions were hobbled together as best they could.

Moglia, his players and coaches also waited out a stormy Friday and Saturday when Florence finally came ashore. The fatal storm, which officials say is responsible for nine deaths in South Carolina, was forecast to do significant damage in the area around campus. “It wasn’t always easy,” said Brewer, who is from Bowdon, Georgia. “But we were all together and keeping us all positive.”

Moglia said some coaches’ homes have some water damage as flooding has continued around Conway due to the cresting Waccamaw and PeeDee rivers. But no one was hurt, he said. “That helped us stay focused on football,” he said.

The Chants are a team that’s dealt with obstacles before. In July 2017, Moglia stepped away from the team due to a respiratory problem. He was medically cleared to return in January.

Preparations for last week’s win at Louisiana-Lafayette were difficult. Moglia said they would have to travel about 45 minutes each way to get to their high school practice field, time taken away from film study or other group workouts. Finding weightlifting time for players accustomed to working out was near impossible, so Moglia, the one-time CEO of TD Ameritrade, tried not to worry about it.

There were group dinners and movies, video game competitions in hotel rooms and time to explore their temporary city. “I know that helped us stay together,” Brewer said.

Brewer said the bond was essential as Coastal held off Louisiana 30-28 to win its Sun Belt opener for the first time since joining FBS before the 2016 season.

The team got the OK to return to the area after the Louisiana game, although not at the closed campus. The Chants have spent the past week at a hotel connected to the Myrtle Beach Convention Center and have practiced at Myrtle Beach High’s field.

Coastal Carolina will play at Troy on Saturday and are expected to return to the re-opened campus for workouts and normalcy on Monday. “You can get a little stir crazy,” Moglia acknowledged. “But I’m grateful for the way our guys have handled this.”