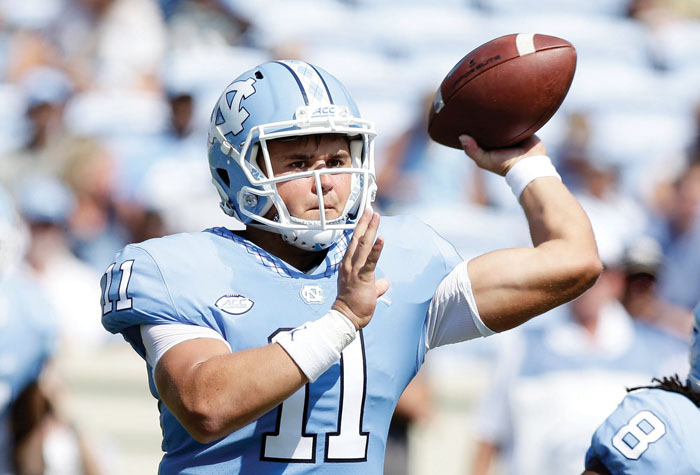 Neither offered much of an answer.

Will Miami start N’Kosi Perry for the first time and end Malik Rosier’s 17-game run as first-string? Will North Carolina’s Chazz Surratt make his 2018 debut? Those matters and more will be decided Thursday night, when the 16th-ranked Hurricanes (3-1, 0-0) open defense of their Atlantic Coast Conference Coastal Division title against the Tar Heels (1-2, 1-0).

Fedora was a little more forthcoming: He’s keeping Nathan Elliott as his starter, but Surratt — back from suspension — is being prepped to play as well.

“He could and he couldn’t,” Fedora said.

“Depending on what I think,” was the reply.

Answers will start coming around 8 p.m. Thursday, which will be about the time that Richt sends somebody onto the field for Miami’s first snap of the evening.

Perry was 17 of 25 for 224 yards and three touchdowns off the bench in last week’s 31-17 win over FIU, an effort that strongly suggested he’s ready to be the start. Perry, Rosier and Cade Weldon all got first-team reps in practice this week, but Richt acknowledged that he made sure that reporters — who can see a small portion of workouts twice a week — couldn’t draw any conclusions based on what they viewed in those open windows.

“I think the less your opponent knows, the better,” Richt said.

Miami hasn’t lost at home as a 14-point favorite or better since 2005, a span of 33 games. The Hurricanes are favored by 17 1/2 points going into Thursday, though that line has dropped a bit since it was originally posted — possibly because of the uncertainty at quarterback, and possibly because North Carolina looked like a much-improved team when it topped Pitt 38-35 last weekend.

That came after they had a game against UCF canceled due to Hurricane Florence.

“I think we just re-bought back in during the break and decided we’re going to get these wins,” defensive tackle Jeremiah Clarke said. “We’re going to do what we have to do to win, no matter what.”

Some other things to know going into Thursday night:

Miami could have S Jaquan Johnson (hamstring) back Thursday night. Johnson missed the FIU game after getting hurt the previous week against Toledo. Hurricanes WR Ahmmon Richards, who had one catch in the opening loss to LSU and hasn’t played since, remains out with what has been called a bone bruise in his knee. Also, star Miami WR/KR Jeff Thomas, who left the FIU game early with dehydration, is expected to be a full-go on Thursday.

HELP ON THE WAY

The Tar Heels could get seven players back this week after serving suspensions for selling team-issued shoes. Starting DE Tomon Fox is the only player set to miss the game due to the shoe issue. Those who can come back include Surratt and WR Beau Corrales — a 6-foot-4 sophomore who had two TD grabs against the Hurricanes last year.

One reason for North Carolina’s offensive success last week was that the Tar Heels had all three of their top tailbacks for the first time. Ohio State transfer Antonio Williams led the way (114 yards, two touchdowns) while Jordon Brown and Michael Carter both scored as well. Williams’ physical running style in particular will be needed against a Miami defense that leads the country in tackles for loss and is No. 2 nationally in total defense.

Miami was the overwhelming preseason pick to win the ACC’s Coastal Division for a second straight year. North Carolina was picked to finish sixth in the poll, taken in August.

The teams have played 21 times, with North Carolina leading the series 11-10 — and both teams having scored exactly 462 points in those 21 games.

Livingstone football goes for three in a row