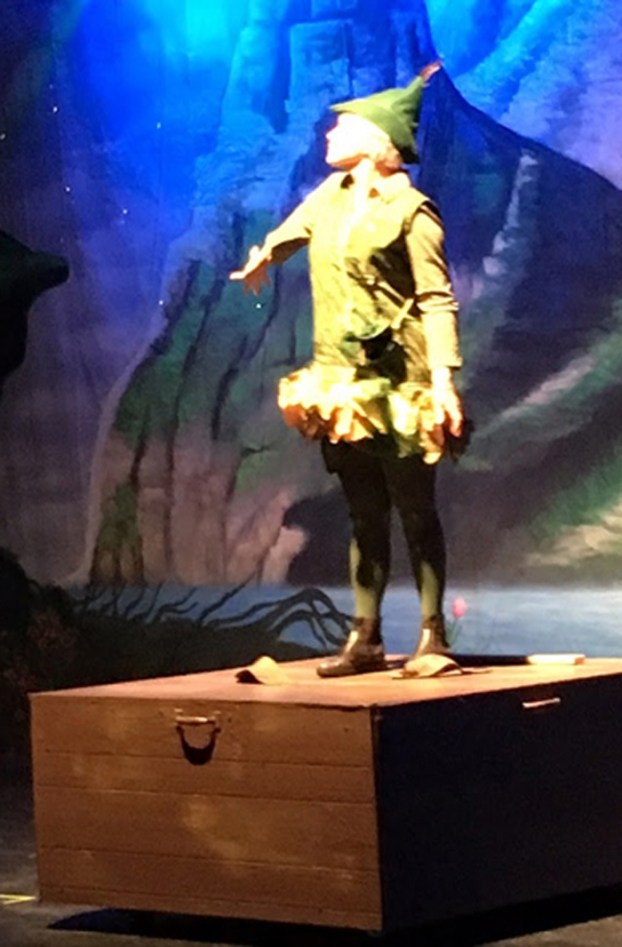 The short play, which is about growing up and not growing up, living in the past and facing the future, is emotional, especially for people who have lost their parents, and it’s a reflection of one daughter’s reaction to her father’s death and to her siblings.

Claudia Galup is gentle, determined, a little desperate, as Ann, the oldest of the children. She’s the one with the 70th birthday, the one who doesn’t feel like a grown-up and isn’t sure she wants to.

She begins the play with a monologue describing what has happened and how she once played Peter Pan on stage. She hopes for many things.

Movement 1, as it is called, is the hospital scene, with Gary Thornburg basically silent in the hospital bed as George, the patriarch. George was a doctor who spent much of his time caring for other children, leaving his five feeling a little bit ignored — or at least that’s how Ann feels. He may be gone but is not forgotten.

Ann has studied rhetoric and linguistics, and her observations of language seem to annoy her brothers. Two of them, Michael and Jim, are doctors, like her father. One is a professor, and their youngest sister, Wendy, has some sort of career helping people.

Jennifer Hubbard plays Wendy, the youngest, the most hopeful, the one who still believes in religion and God though not in the way her Catholic upbringing would recognize.

Brother Jim, a surgeon, is appalled at the hospital’s care for his father and appalled at life, what it does to people. Of the siblings, he’s the loudest, the most frustrated and pained, the ex-football star itching for a fight. Jim, played by Jon Bowlby, is a balled-up fist of energy and agony.

Brother Michael is also a doctor, but without the angst. He can be childlike with his sister Wendy and can play the childhood games. He seems the most nurturing of the brothers. Bill Reilly makes him appealing and vulnerable.

John, played by John Brincefield, has tender moments with Ann and also lets himself loose in the Neverland sequence. Years of teaching have made him a little more forgiving.

Movement 2, the Irish wake, takes place in the family home, around the big table, everyone drinking Jameson’s Irish whiskey except for Wendy. Here the family dynamics are revealed. Ann, as the oldest, feels she’s in charge, though she admits in the discussion she never knew what it meant to be a grown-up, even though she’s had a husband and children, the husband now dead.

The discussion turns to religion and politics, and though sensitive Wendy begs them not to go there, the boys jump in with both feet. The conservative/liberal discussion gets heated. Their concept of God and the afterlife causes more upset. While loud Jim insists he’s right, professor John tries to even things out, but Ann gets mad and Wendy cries out for them to stop, saying, “We’re orphans now.”

Time for a break. And while members of the audience enjoys intermission, thoughts are surely racing in their heads as they review their own sibling relationships, perhaps reliving the death of a parent.

Curiously, we know little about this family, these individuals. It’s difficult to know what makes them tick or what motivates them.

In Movement 3, the family goes back to Neverland, Ann in her Peter Pan costume, Wendy as Wendy, Tinkerbell glowing above. John and Michael, of course, are lost boys, and Jim is Capt. Hook.

But Peter Pan is older now. He can’t fly, so they walk to Neverland. His foot hurts, and he’s lost some playfulness. Still, Peter and the boys do have a rousing sword fight, until scary Hook arrives and — well, a horrible thing happens.

In this part of the show, the never-grow-up theme is strong. But Wendy has to remind Peter that he’s young and agile and needs to have fun.

It’s almost painful to see the brothers and sisters like this, but it relieves some of the tension, too.

The ending is spare and simple, leaving the audience still, unsure what to do. Maybe it’s hard to connect because the play is so personal to playwright Sarah Ruhl.

Director Heather Wilson-Bowlby loves this play, as do Hubbard and Galup. It will speak to many, with its universal themes, and it will unsettle many. It’s not a play for young children. In fact, you need to be of an age to understand some of the issues or to appreciate them. Wilson-Bowlby deserves credit for assembling this cast and making it cohesive.

Rod Oden, who designed the set, sound and lights, reflects the mood of each movement.