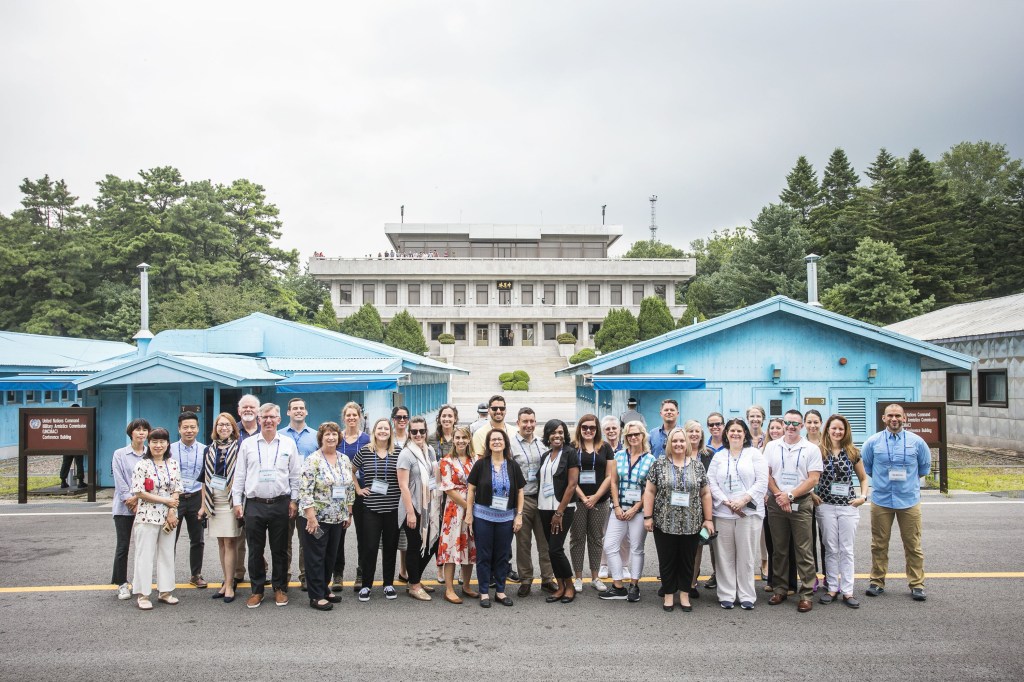 A picture of the fellows in the Republic of Korea. Submitted photos

MOUNT ULLA — Melani Lippard of West Rowan High School was one of only 30 teachers selected as a Korean War Legacy Foundation Fellow this summer. As a fellow, Melani spent a week in the Republic of Korea researching Korean history and culture. The trip was from July 23 to July 30, and focused on building a deeper understanding of the Korean peninsulas rich history, its simultaneous achievements of rapid economic development and democratization, and close friendship with the United States through visits to key historical sites, museums, and conversations with Korean teachers and students.

Teacher fellows were able to travel to the Demilitarization Zone (DMZ) to see first hand the border that has divided the Korean people for more than sixty years. Fellows were given special access to the border area and were able to stand only feet away from North Korea near where two South-North Summits took place. The teacher fellows were also special guests at the United Nations Armistice Day celebration, which was attended by Korean War veterans from many nations and even the Prime Minister of Korea, Lee Nak-yeon. The ceremony, which was broadcast live in Korea, is an annual commemoration of the contributions of UN veterans of the Korean War that is held on the anniversary of the formal cessation of fighting.

Fellows also attended a teacher summit in which U.S. educators were able to talk about teaching social studies with educators from the Republic of Korea. The use of simultaneous translation allowed for the teachers from both nations to engage in a vibrant discussion about teaching the Korean War and contemporary Korea in United States classrooms. Teacher fellows were also able to get a closer look at the Korean education system by doing a school visit. Seoul Digitech High School is known for their technology and graphic design programs, and while visiting our fellows tested a virtual reality programs created by students at the school.

The fellows were also introduced to Korean history and culture. This included a visit to the Gyeongbokgung Palace used during the Joseon dynasty, an examination of national treasures at the Korean History Museum in Seoul, and a stay at a Buddhist temple on Gangwha Island near Incheon. At the temple, teachers learned about a monks life, practiced meditation and had a special question and answer session with the head monk of the monastery.

In order to coordinate this trip the Korean War Legacy Foundation worked closely with the Ministry of Patriots and Veterans Affairs. At the same time the foundation has worked to develop curriculum and resources for teachers to use that cover the Korean War and its legacy, including collecting of over 1,000 interviews with war veterans, which can be found at http://kwvdm.org. You can also find more information about education materials and the Korean Research Trip at https://koreanwarlegacy.org