Livingstone football goes for three in a row 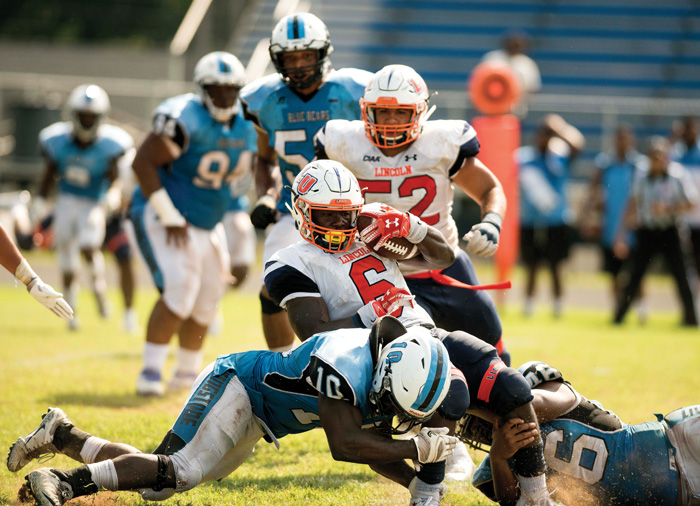 SALISBURY — The noise from the Livingstone weight room on Tuesday morning was a little bit louder, even enthusiastic.

Winning will do that.

Livingstone, 0-10 last season, has won consecutive football games for the first time since 2015. Sure, the victories — both shutouts — were over a first-year program in Allen (19-0) and a school with a 21-game losing streak (Lincoln, 30-0), but the Blue Bears and their fans will take them.

Things will get tougher this weekend for Livingstone (2-1) as it travels to CIAA North foe Virginia Union. The Panthers are also 2-1 but the wins are impressive, beating Seton Hill (34-28) and Winston-Salem State (27-19). Their only loss came to a strong Carson-Newman team, 33-29.

VUU was 6-4 in 2017 and has a new coach this season — Alvin Parker, who has battled Livingstone in the past while at St. Augustine’s and Elizabeth City State.

“Union is very sound on offense,” said Rodney Hughey, Livingstone’s acting coach and defensive coordinator. “They’ve got a very talented team, but it’s more about Livingstone than the other team. We need to keep doing our jobs.”

Hughey, in his 10th season at Livingstone, is filling in for head coach Daryl Williams for the first four games. He and the team have been able to present Williams with two game balls.

“That’s the mission every week, to give him the game ball,” added Hughey, who knows the shutouts will eventually end. “We’re taking pride in the shutouts, but the biggest stat is winning. Shutouts are great but as long as you have one more point than the other team, that’s all that matters.”

On the other hand, linebacker Raheem Coxfield is excited about the shutouts — and anything else to do with defense.

“Our goal is to take one game at a time and play as a team,” said Coxfield. “We want to keep a chip on our shoulder. I haven’t seen any individual out there this year. We all came together during camp and it was ‘go time.'”

Coxfield, of Adel, Ga., and a junior transfer from Savannah State, stood out in last week’s smashing of Lincoln. Coxfield led the team with 10 tackles (three for losses), five assists and two forced fumbles.

“Knowing the game is my biggest strength,” said the confident Coxfield. “My assignments may be difficult to some, but it’s basic to me … seems to come natural. But my favorite part of football is hitting. And when I step on the field, it’s not about what happened the play before or after. It’s about staying the in the moment and playing every down that way.”

Hughey said that the staff is very happy that Coxfield decided to join his brother, senior defensive lineman Gerard Lyons, at Livingstone. Another brother, Brandon Doe, once a great high school running back in Georgia, was killed last December. Coxfield wears No. 10 in Brandon’s memory.

“Raheem brings a different kind of spark to the defense,” said Hughey. “His extreme confidence is his best asset. You can’t tell him that he can’t do something because if you do, he’s going to do everything he can to prove you wrong. He’s physical, he’ll hit you and most of all, his thing is to play hard all the time.”

Coxfield, son of Ruby Williams, starred at Cook County High School in southern Georgia, just north of Valdosta. He played both ways, lining up at linebacker on defense and running back on offense.

At Livingstone, Coxfield is majoring in history. He wants to pursue football as far as it takes him, but after that, has an eye on becoming a high school teacher and coach.

Coxfield added that while he and fellow linebacker Raymond Basurto call the defensive signals, he sometimes takes his cue from four-year starters Armond Cox (defensive tackle) and Gregory Hines (cornerback).

“Those two guys are the true leaders,” said Coxfield. “When I’m on the field, if Armond turns around and says to change the call, we change it, because to be a leader, you’ve got to know how to listen. He’s been here longer and knows what it takes. And Hines already knows what it takes to be successful, too.”

Williams, who will return to the game-day sideline on Oct. 6, the homecoming game against St. Augustine’s, is very pleased with the 2-1 start.

“It’s a testament to the players and coaches that everything has run so smoothly,” said Williams. “It just goes to show the strength of the program — it’s not about just one person being there or not being there. It’s about the team.”

NOTE: Livingstone and Virginia Union each lost games to Hurricane Florence on Sept. 15 — the Blue Bears at Lane (Tenn.) and the Panthers at Johnson C. Smith.