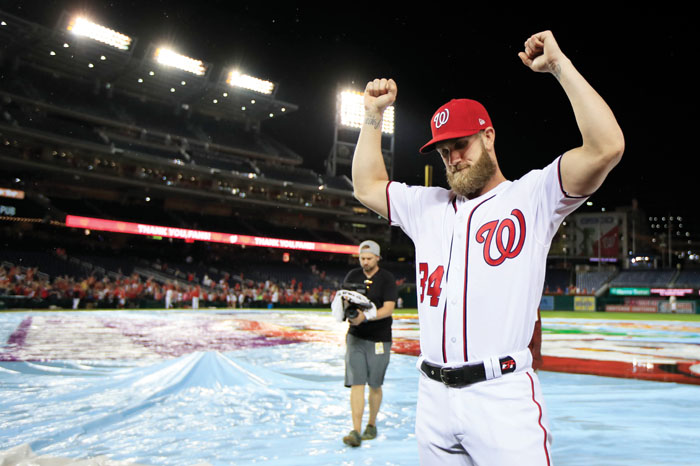 Washington Nationals Bryce Harper (34) bows his head and raise his arms with clenched fists as the Nationals celebrate and bid goodbye to their fans ending their last home game of the season with a 9-3 rain delayed win against the Miami Marlins in Washington, Wednesday, Sept. 26, 2018. (AP Photo/Manuel Balce Ceneta)

WASHINGTON (AP) — More than 3½ hours before the start of what many expect to be his last game at Nationals Park as a member of the Washington Nationals, Bryce Harper stood at his locker and let his eyes linger on that familiar white jersey with the curly red “W’’ on the front and his last name on the back.

Then Harper, who can become a free agent at season’s end, put on his full uniform, right down to the stirrups — the only player ready that far ahead of Washington’s 9-3 victory in its home finale against the Miami Marlins, which was stopped Wednesday after seven innings because of rain.

“I knew I wanted to get here and put the ‘uni’ on right away, and just cherish that moment, if it’s going to be the last time or not,” the outfielder said beforehand. “I can’t really stand here and say it’s going to be ‘farewell’ or anything like that, because nobody knows. Nobody knows what this offseason holds.”

The storm arrived, naturally, as Harper stood in the on-deck circle while the last out of the seventh was recorded. That scrapped manager Dave Martinez’s plan to remove Harper from his spot in right field during the top of the ninth, to allow spectators a chance to salute him.

Still, fans did get to greet him with signs, standing ovations and chants of “Let’s go, Harper!” for each at-bat. He went 0 for 4 with a pair of strikeouts.

“Just running out there, I wasn’t really thinking about it being my last game or anything like that,” he said afterward. “My heart lies here.”

If this was, indeed, a “goodbye” to Harper, consider it also a “welcome” to someone the Nationals could count on to replace his outfield production, 21-year-old rookie Victor Robles. He delivered the first four-hit game of his nascent career, including a three-run homer and a two-run double, and stole a base, to boot.

Harper’s take on his fellow outfielder?

“Watching Robles, what he did today, that was a lot of fun,” Harper said. “Tried to enjoy that the best I could.”

The Nationals — 81-78 and, like the Marlins, missing the playoffs — close the season with a three-game series at Colorado.

A team that lost 100 games in a season twice before Harper came aboard won four NL East titles with the slugger (although never won a playoff series).

He sparked raucous celebrations at his home stadium when he won the Home Run Derby during All-Star weekend this July.

“It’s like I’m standing here like a 35-year old, but I’m only 25. So it’s the first time going through something like this, of course,” Harper said.

Asked what it would take for him to return to Washington, he replied: “I’ve got to know if I’m in” the team’s plans.

“Everybody knows what could possibly happen,” he added. “I could be out of here or I could be back.”

Needless to say, folks such as Martinez and Harper’s teammates would prefer the latter.

“He wants to be back here. I know that,” the rookie skipper said. “We’ve got three games left. He’s going to wear a Nationals uniform for three more games and hopefully for many, many years after that. So we’ll see.”

Until it’s been determined, Harper’s 2019 destination will be the talk of baseball.

In his first start in the majors, Washington RHP Kyle McGowin left because of a blister on the middle finger of his pitching hand after walking the first two batters in the fifth inning. He gave up no runs and just one hit. Wander Suero (4-1) got the win with one inning of scoreless relief. Marlins starter Wei-Yin Chen (6-12) went four innings, allowing four earned runs and seven hits.

Nationals: 1B Ryan Zimmerman left after the second inning because his back tightened up.

College Football: Good … and getting better