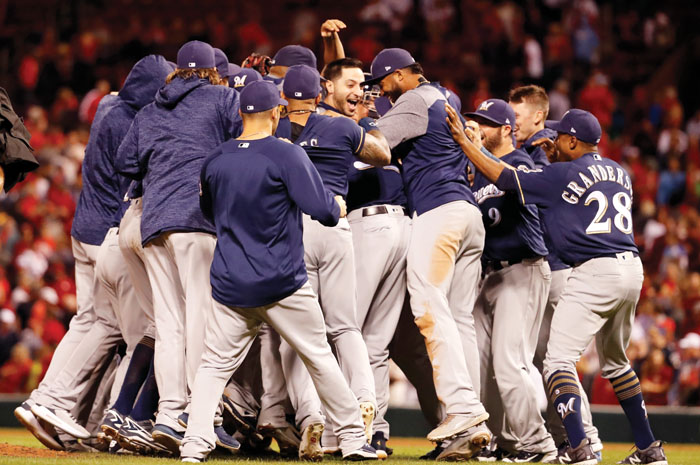 Milwaukee Brewers celebrate after defeating the St. Louis Cardinals 2-1 in a baseball game Wednesday, Sept. 26, 2018, in St. Louis. The win clinched a postseason spot for the Brewers. (AP Photo/Jeff Roberson)

ST. LOUIS (AP) — The Milwaukee Brewers clinched their first playoff spot since 2011 by ensuring at least a spot in the NL wild-card game, helped Wednesday night when a rookie St. Louis pinch-runner suddenly fell on his way to the plate in a 2-1 win over the contending Cardinals.

The Chicago Cubs also sealed a postseason berth because of the Cardinals’ loss.

The Brewers (92-67) began the night a half-game behind the Cubs for first place in the NL Central and 3 ½ games ahead of Colorado for the top wild-card slot.

Milwaukee advanced to the NL Championship Series in 2011 before being eliminated in six games by the eventual World Series champion Cardinals.

St. Louis (87-71) entered a half-game behind the Rockies for the final wild-card berth.

The Cardinals missed a big chance to tie it in the eighth inning. Matt Carpenter walked and was lifted for pinch-runner Adolis Garcia. Jose Martinez then hit a slow roller to third baseman Mike Moustakas, who threw wildly to first.

Garcia was waved home but fell halfway to the plate, allowing second baseman Hernan Perez to easily throw him out to end the inning.

Chacin (15-8), who had lost his last three decisions, gave up one run on just one hit over five innings. He needed a season-low 60 pitches and faced three batters over the minimum.

Xavier Cedeno, Corbin Burnes, Josh Hader and Jeremy Jeffress combined for four shutout innings as the Brewers held the Cardinals to a season-low two hits. Jeffress earned his 13th save in 18 chances.

Milwaukee now returns to Miller Park to take on the lowly Detroit Tigers in the three-game series starting Friday to end the regular season. The Cardinals travel to face the Cubs for the three-game set.

Shaw’s single scored Christian Yelich, who walked all five times he came to the plate, and gave the Brewers a 1-0 lead in the third.

Shaw broke a 1-all time with an RBI single off Dakota Hudson in the fifth, again scoring Yelich, to make it 2-1.

Yelich, who reached on a walk by Chasen Shreve (3-4), became the ninth inherited runner out of 18 that Hudson has allowed to score.

Cardinals starter John Gant stranded runners in each of his first four innings before being lifted with one out in the fifth. It is the fourth time in his last five starts that Gant failed to go more than 4 1/3 innings.

Jedd Gyorko’s sacrifice fly with the bases loaded in the fourth made it 1-all.

Brewers: Jeffress, who missed the series opener because of neck spasms, pitched for the first time since Friday went 1 1/3 innings.

Brewers: RHP Zach Davies (2-7, 4.65 ERA) begins the three-game series at home Friday night against Detroit and RHP Jordan Zimmermann (7-8, 4.31 ERA). Davies, who is making his first career start against the Tigers, gave up two runs in four innings in a loss to the Pittsburgh Pirates last Saturday.

Cardinals: RHP Adam Wainwright (2-3, 4.08 ERA) gets the start in the opener of a three-game series at Chicago and RHP Kyle Hendricks (13-11, 3.49 ERA) on Friday afternoon. Wainwright leads all active pitchers with 15 wins against the Cubs and his 11 career wins at Wrigley Field is third all-time in franchise history behind Bob Gibson (15) and Harry Brecheen (13).