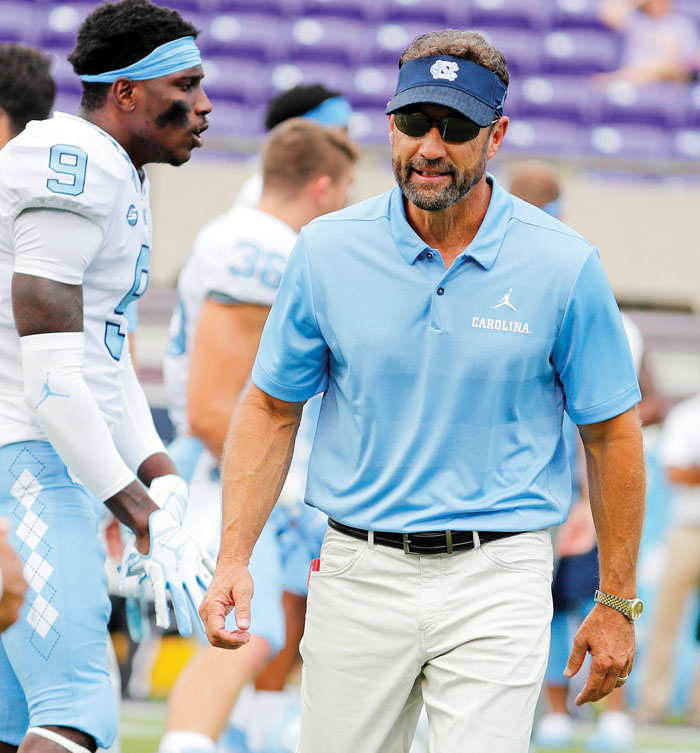 FILE - In this Sept. 8, 2018, file photo, North Carolina head coach Larry Fedora walks among his team prior to their game against the East Carolina, in Greenville, N.C. Fedora's Tar Heels play at No. 16 Miami on Thursday, Sept. 27, and will have nearly back nearly all the players who were suspended for selling-team issued shoes in the offseason. (AP Photo/Karl B DeBlaker, File)

CHAPEL HILL (AP) — North Carolina is nearly back at full strength for its game at No. 16 Miami with the return of several players who were suspended for selling team-issued shoes.

Seven players — including quarterback Chazz Surratt and receiver Beau Corrales — are eligible to make their season debut Thursday against the Hurricanes. And after being down as many as 11 players in the opener against California, UNC will be down just one — starting defensive end Tomon Fox — for the shoe issue this week.

“I’m looking forward to seeing them all, because we need every single one of them,” UNC coach Larry Fedora said. “There’s a lot of guys that give us some depth at some positions where we’ve been really thin and it’s been really shaky at this point. But now we’ve got some guys that can get back into the fray, start competing.”

UNC (1-2, 1-0 Atlantic Coast Conference) announced in August that 13 players would miss time for the NCAA secondary violations, with nine set to miss four games. Most of those players were due back this week from the start, though the duration of some suspensions changed once Hurricane Florence forced the cancellation of UNC’s Sept. 15 home game against No. 13 UCF.

The penalties were based on a formula that required the involved players to sit 30 percent of the regular-season schedule. Once UNC was at 11 games, the four-game suspensions fell to three games — though they would return to four if UNC adds a replacement game later in the season.

The NCAA had approved a school request to stagger the suspensions with three defensive ends affected. So Fox is starting his three-game suspension, then he’ll play against Virginia Tech on Oct. 13 before sitting the following two games.

That approval also allowed Malik Carney — another starter who played the opener then sat the past two games — to play against Miami, then conclude his suspension against the Hokies.

Redshirt freshmen Brian Anderson and Jordan Tucker could see time on the offensive line, which faces a Miami defense that leads the country with 46 tackles for loss. Anderson could see time as the No. 2 center while Tucker is a reserve tackle.

The returnees also include reserve defensive end Tyrone Hopper and Corrales, a 6-foot-4 sophomore who had two touchdown catches against the Hurricanes last year .

Then there’s Surratt, a sophomore who started seven games at quarterback last season.

Junior Nathan Elliott has started every game and is coming off a career-best passing day (313 yards) with two touchdowns in the weekend win against Pittsburgh . Fedora said Elliott would start against Miami and was coy about whether Surratt could also see work, though he said Surratt has gotten more practice reps to prepare as a backup.

“When you lose a guy like Malik Carney or Chazz Surratt, people that are leaders or people that you look up to on the team, you definitely feel it week in and week out,” defensive tackle Jeremiah Clarke said.

“So to have them back this week will definitely be a boost for our guys. But like I said, we have a next-man-up mentality so it’s not like we blinked an eye when they weren’t there. … But you’ve got to take care of business no matter who you’ve got.”