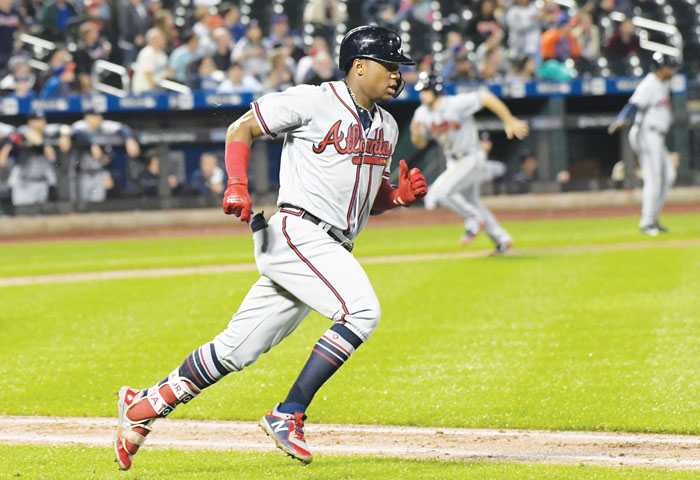 Atlanta Braves' Ronald Acuna Jr. runs to first base with a two-run single during the seventh inning of the team's baseball game against the New York Mets on Tuesday, Sept. 25, 2018, in New York. (AP Photo/Bill Kostroun)

Atlanta shortstop Dansby Swanson exited early with a sore left hand, and the Braves were held scoreless by Noah Syndergaard for six innings. But they jumped all over the Mets’ bullpen for seven runs in the next two innings to match their longest winning streak of the season.

Looking to land the best playoff position possible, the Braves began the day a half-game ahead of NL West-leading Los Angeles for home-field advantage in the best-of-five Division Series. The Dodgers played at Arizona later.

Mets captain David Wright was reinstated from the 60-day disabled list before the game but did not play even though he was available off the bench. Following a long road back from several serious injuries, Wright was on the active roster for the first time since June 3, 2016.

The 35-year-old Wright is scheduled to start at third base Saturday night against last-place Miami, a farewell game before he calls it a career. Fans in the small crowd chanted “We want David!” during the late innings, including when Mets third baseman Todd Frazier committed a costly error in the eighth.

Kurt Suzuki drove in two runs for the Braves, who trailed 3-0 before rallying against Robert Gsellman (6-3) in the seventh. Acuna’s two-run single off Drew Smith gave Atlanta a 4-3 lead.

Suzuki had an RBI double in the eighth, and Albies hit a two-run shot off Jerry Blevins in the eighth for his 24th homer this year.

Dan Winkler (4-0) allowed a run in one inning for the win.

After the first pitch was delayed 32 minutes by rain, Michael Conforto hit an RBI double off the top of the center-field fence for the Mets in the third. Jay Bruce followed with a run-scoring single off rookie Touki Toussaint, who went five innings in his fifth major league start.

Tomas Nido had a sacrifice fly in the sixth off Winkler.

Before the game, the Mets played a video tribute to former first baseman Lucas Duda. Now a bench bat for the Braves, the quiet Duda smiled and doffed his cap in the dugout.

Braves: Swanson lined out to center field in the second and was replaced at shortstop by Charlie Culberson in the bottom of the inning. The team said Swanson was removed as a precaution.

Mets: Assistant general manager John Ricco said the club hopes to schedule injured slugger Yoenis Cespedes for surgery on his other heel during the third week of October. Following the first operation on one heel, Cespedes is still wearing a boot that Ricco thinks can come off in two to three weeks.

Mets ace Jacob deGrom (9-9) makes his final scheduled start of a sensational season Wednesday night versus Atlanta. The right-hander leads the majors with a 1.77 ERA and hopes to polish his resume for the NL Cy Young Award. Against the Braves this season, deGrom is 0-2 with a 1.09 ERA in five outings. He is 5-5 with a 1.83 ERA in 16 starts against them. On the mound for Atlanta will be left-hander Sean Newcomb (12-9, 4.04), perhaps auditioning for his postseason role.