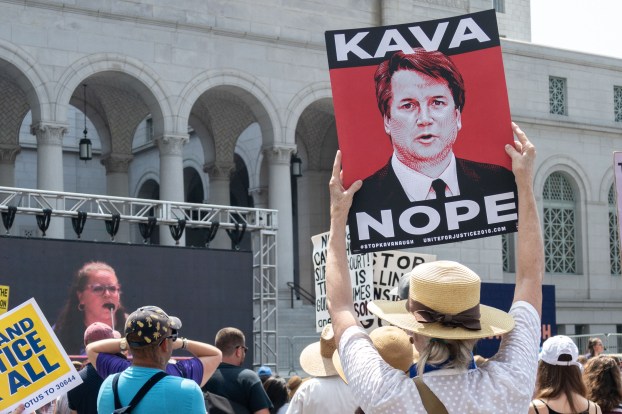 Protesters took to the streets to protest Donald Trump's nomination of Brett Kavanaugh to the Supreme Court. Tribune News photo.

Leonard Pitts: ‘What boy hasn’t done this?’ underestimates all men

Gina Sosa is not impressed by attempted rape.

“What boy hasn’t done this in high school?” she asks. “Please, I would like to know.”

Since she asked so nicely, I went on Twitter, looking for men who managed to get out of school without committing attempted rape. Turned out to be pretty easy. I found lots of them.

A guy named Phil said: “It was all I could do to get the courage to ask a girl to a movie. The car bench seat next to me was safer than a fallout shelter.” A guy named Charles had a similar experience. “I barely committed kissing,” he said.

This isn’t to suggest no high school boy has ever sexually assaulted a girl; that would be stupid. But that word also applies to the question asked by Sosa, a failed congressional candidate from Miami. She was part of a group of Republican women in Florida speaking to CNN last week about an allegation of attempted rape against a 17-year-old named Brett Kavanaugh. He, of course, grew up to be Donald Trump’s nominee for the Supreme Court — and to deny the accusation.

“What boy hasn’t done this?” she says.

So she’s seriously asking what boy hasn’t — as Kavanaugh allegedly did — thrown a girl down and pinned her with his weight? What boy hasn’t ground himself against a girl while trying to rip off her clothes? What boy hasn’t covered a girl’s mouth when she tried to scream?

Well, I didn’t. Nor, if Twitter is to be believed, am I unique. So pardon me if I feel defamed.

I’ve never cared much about defending my gender from criticism. Much of what we receive, whether on issues of unequal pay, male privilege, interrupting women when they talk — or even that thing about leaving the toilet seat up — I concede that we deserve.

But rapists? Without exception? So enslaved by raging hormones, so helpless before our own sluttishness that sexual assault is just something every woman should expect?

No. That is demeaning, insulting, ignorant and wrong.

It made me hope Sosa has no sons. Can you imagine having a mother who thinks so little of you?

It also made me hope she has no daughters. Can you imagine coming home traumatized, some guy’s paw prints all over you, and having Mom tell you to grin and bear it, because boys will be boys?

It’s true enough that Sosa’s words suggest a certain moral obtuseness among Kavanaugh’s defenders, so desperate to seat him on the high court that they are willing to minimize and trivialize the crimes alleged against him. But truth is, this obtuseness is unique to no party — or person. It belongs to us as a nation.

It’s the reason one woman in six is the victim of an attempted or completed sexual assault, the reason hundreds of thousands of unprocessed rape kits gather dust in warehouses. It is the reason only six of every thousand rapes results in a prison sentence. And it is one reason almost 70 percent of rapes are never reported. Survivors know they won’t be believed — or even taken seriously.

We all should find that abhorrent, but not all of us do. Some say the right things about sexual assault, but when it comes time for accountability, they flinch, distorting morality like a funhouse mirror so as to create sympathy for perpetrators while survivors live with guilt and shame.

“What boy hasn’t done this in high school?” she asks.

And though the question is bluntly dismissive, it doesn’t spring from nowhere. Rather, it grows from the quietly dismissive way too many of us routinely treat sexual-assault survivors when they are courageous enough to trust us with their pain. Sosa should be ashamed of herself, yes.

But she’s not the only one.

Knox Middle School might not be the oldest facility in the Rowan-Salisbury System, but it faces the biggest security challenges,... read more