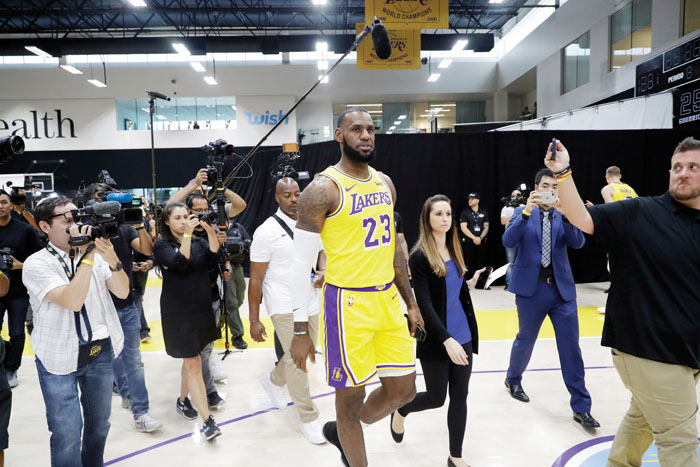 EL SEGUNDO, Calif. (AP) — Although the Lakers’ first official practice of the LeBron James era was focused on defense and learning new terminology, they ended it with a good old-fashioned 3-point shooting contest.

The Lakers’ new superstar was just another teammate during the spirited back-and-forth competition Tuesday. When James wasn’t draining his own 3s, he marveled along with everybody else at the surprising perimeter prowess shown by JaVale McGee, the 7-foot veteran with exactly one 3-pointer during a game in his 10-year NBA career.

The Lakers have many weeks of work ahead to become a cohesive team assembled around James, but he can already sense they’re heading down the right path. They’re planning to have plenty of fun along the way, too.

James was both upbeat and businesslike after his first workout under coach Luke Walton, who entered the NBA in the same draft class as James in 2003. The Lakers will hold double practices and a scrimmage on the first two days of camp leading toward their preseason debut in San Diego on Sunday night.

James intends to enjoy the process in his new city.

“We’re here for one reason and one reason only, and that’s to someday hoist the trophy,” James said. “Obviously that’s the end of the road, but you have to have those types of championship habits every day, not only on the floor, but off the floor as well. … Everyone is excited to get back to work. That’s a good thing. No one is coming in today and wishing it was still summer. It’s the best time of the year. Basketball season is back up, baseball season is on its way to the playoffs, and the NFL is in Week 4. So what could you ask for as a sports fan?”

James naturally becomes the center of attention on any team, and he quickly assumed a leadership role for the Lakers. He’s also eager to see his veteran teammates assert themselves to help the Lakers’ young returning core, whether it’s Rajon Rondo instructing his fellow guards on assignments, or Lance Stephenson vocally calling out defensive instructions in half-court work.

“He’s LeBron. He’s one name,” Rondo said. “It speaks for itself. He’s been a leader and a mentor in this league for a long time, on and off the court. He has a blueprint off the court as well. So he embraces his role. He embraces all the pressure that he’s ever dealt with in his career, and he’s always risen above the occasion.”

Although Walton and James are just getting to know each other, the coach is grateful that his new star is leading by example from the opening practice.

The Lakers have lacked this level of respected on-court leadership in the two seasons since Kobe Bryant’s retirement, but LeBron and his fellow new veterans have strong ideas about how an NBA team must approach its work to be a winner.

“I could see it yesterday,” Walton said. “The way he’s approaching (practice) has changed from the pickup we were playing in the summer. It definitely set the tone. We’re on a journey that started today, and we’re very serious about the business that we got done today.”