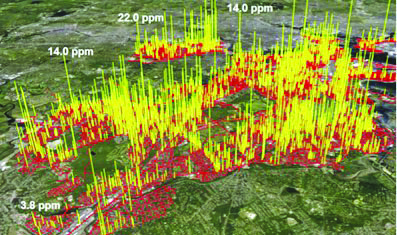 A map of Boston shows areas where gas leaks have been measured. Submitted

Since 1970, Salisbury has seen the number of hot days over 90 degrees rise from 14 every summer to 34, according to a team of scientists who publish a chart of by zip code for the entire United States.

Globally, the six warmest years on record have occurred since 2010.

The days of uncertainty about whether our climate is changing are over. The majority of voters in both political parties now agree on that.

When Hurricane Florence was due to arrive in North Carolina, I was flooded with messages of support from family scattered all over the United States. “Is there anything we can do to be helpful?” they asked.

Even though they are hundreds or thousands of miles away, the answer was yes.

They can help stop future flooding.

Warmer oceans and lakes are causing increasing evaporation. The moisture rises up into clouds, turns into rain, and violently falls hundreds of miles away from where it started, like Hurricane Harvey, which dropped more than 4 feet of rain on the Houston area in 2017.

According to the National Weather Service, during Florence, parts of North Carolina beat that, receiving four and a half feet of rain. Who says North Carolina cannot beat Texas?

Pop quiz: What is the main reason for our globe’s water getting warmer?

The answer, you may be surprised to learn, is leaking natural gas.

A basic lesson: If you own a white car, and your neighbor has the same model in black, on a sunny day her car will heat up inside more quickly and get hotter than yours. If you both leave your kids in car seats while you run into the store, your neighbor’s kids will be at higher risk of suffering. Why? Because the color of her car captures more heat.

The same is true with the earth’s wrapping. There are a lot of gases up there, some of which trap more heat than others. Carbon dioxide (CO2) gets all the attention, but according to the professional association of scientists working on this issue, natural gas is between 150 and 180 times more powerful over its 12.4-year lifetime.

If you allow more natural gas to escape into the clouds, you are essentially painting your white car black.

If we stop the leaks, in 12.4 years the car gets painted white again, and the heating of the oceans slows down dramatically.

Our kids would be safer.

America is the leading “natural gas leaker” of the world. This is because we have been the global pioneers in discovering and using natural gas, including our recent industry-changing invention of fracking. We have two-thirds of all the wells, abandoned wells and pipes (both old and new) in the entire world.

In the map above is just one example, from the city of Boston. Examination of other older cities finds the same patterns.

If you are in the natural gas business, it makes sense to repair a leak if it is cheap to fix and fixing it makes you more profitable. And if it is a small leak that costs a lot of fix you lose money repairing it.

In this case you will only fix it if you are forced to by regulation.

In summer of 2016, to the delight and relief of the overwhelming majority of climate scientists (90- something percent, actually), the EPA announced new regulations to stop natural gas leakage.

Industry fought it hard, claiming unnecessary cost to them.

On Sept. 18, as tens of thousands of North Carolina residents were being evacuated or rescued due to flooding, the Department of the Interior announced that the previously established regulations aimed at controlling leaking natural gas would be removed or weakened.

Remember: If we stop the leaks, in 12.4 years the car gets painted white again, and the heating of the oceans slows down dramatically

What can my relatives, and you, do to protect our families and property? Reach out to your local officials and ask what efforts are being made to locate and fix leaks in your town’s natural gas system. Contact your congressman or senator and tell them you will support their re-election if they work to reduce the growth of violent storms by making oil and gas companies stop leaking natural gas into the atmosphere.

We can make our future better if we come together and persuade our elected officials to put the needs of our families, our communities and our nation first.

Letter: Why only interview on Fox?