D.G. Martin: Why ‘Mockingbird’ still fascinates and troubles us 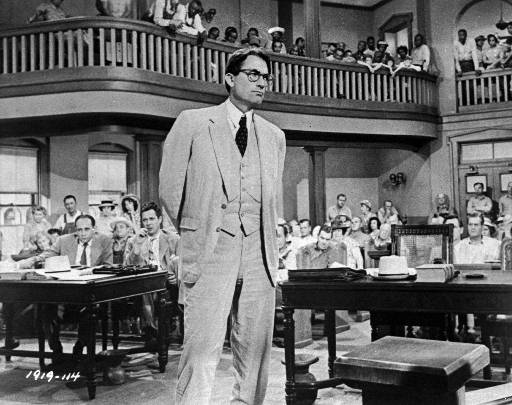 Gregory Peck is shown as attorney Atticus Finch, a small-town Southern lawyer who defends a black man accused of rape, in a scene from the 1962 movie "To Kill a Mockingbird." (AP Photo)

What explains the staying power of Harper Lee’s book, “To Kill a Mockingbird,” and the film that starred Gregory Peck as Atticus Finch?

For some it is its poignant story of Jean Louise or Scout whose love and respect for her father Atticus and his example gave her the courage to face the dangers and unfairness of a flawed world. For others it is Atticus himself and his example of dignity, kindness, and courage.

But it is much more complicated according to a new book, “Why To Kill a Mockingbird Matters: What Harper Lee’s Book and the Iconic American Film Mean to Us Today,” by Tom Santopietro.

“Mockingbird’s” staying power is evidenced by its inclusion on the PBS’s list of 100 novels in contention for selection as America’s best-loved book as a part of its Great American Read broadcast series airing on UNC-TV this month and in October.

That staying power is remarkable, according to Santopietro, because in “the nearly sixty years since Mockingbird was originally published, the world has changed much more than the previous three hundred years combined.”

Santopietro gives us a biography of the “Mockingbird” phenomenon. He takes us to Harper Lee’s hometown, Monroeville, Ala., and introduces us to the friends, family and neighbors who were models for the characters of her book and to her gentle home life and the town’s oppressive segregated social system.

Readers learn how the book was written and how it was sold to a publisher and how it took the country by storm. They learn how the movie was made, including the key casting decisions that brought Gregory Peck on board and how a North Carolina woman from Reidsville, Alice Lee “Boaty” Boatwright, made the key selection of a 9-year old Birmingham, Ala., girl who had no acting experience to play Scout.

Santopietro describes how “Go Set a Watchman,” a sequel or a prequel to “Mockingbird” written in the 1950s, came to be discovered in 2014 and published the following year. That book shocked us by its very different look at Atticus Finch, the hero of “Mockingbird.” In “Watchman,” Atticus is shown in the words of Isabel Wilkerson as a “gentleman bigot.” He is a supporter of the White Citizens Council and a firm opponent of the court-ordered desegregation of public schools and the efforts to open public accommodations to African-Americans.

Santopietro asserts that the Atticus of “Watchman” resembles “no one as much as Strom Thurmond.”

He continues, “Like Thurmond, Atticus here seems to believe that the worst of all possible worlds lies in any involvement on the part of the federal government, an evil topped in his mind only by the participation of the NAACP.”

A better model for “Watchman’s” Atticus than the sometimes mean-spirited Thurmond might be I. Beverly Lake, the segregationist candidate who opposed Terry Sanford in the 1960 governor’s race. Lake sincerely believed in segregation, and like Atticus he was a gentleman. In fact, according to John Drescher in his “Triumph of Good Will: How Terry Sanford Beat a Champion of Segregation and Reshaped The South,” Lake supported the liberal Frank Porter Graham in the 1950 race for U.S. Senate and condemned the racist attacks from the campaign of Graham’s opponent.

According to Drescher, “Lake’s personal and public generosity was part of his appeal as a candidate and set him apart from other leading Southern segregationists of the 1950s and ’60s. He was not a hater.”

The racial views of Lake in the 1950s were like those of Harper Lee’s father, A.C., the model for Atticus, which according to Santopietro “represented the typical white southern male viewpoint in the 1950s.”

Can we still honor the contributions and good qualities of those who held to this discredited viewpoint of their times?

If not, “Mockingbird” will slip off the lists of best-loved books.

D.G. Martin hosts “North Carolina Bookwatch,” which airs Thursdays at 5 p.m. and Sundays at 11 a.m. on UNC-TV. Today’s guest is Philip Gerard, author of “ Dark of the Island.” Next week’s guest is Nicholas Sparks, author of “The Notebook.”