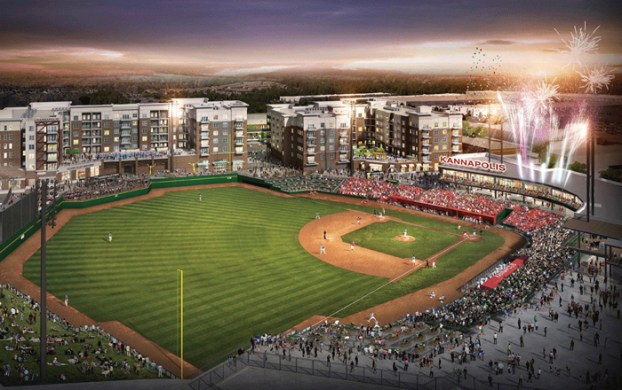 Construction on Kannapolis Intimidators’ stadium to begin next month

The City Council on Monday approved amendments to a construction contract with Barton Malow. Headquartered in Michigan with offices in Charlotte, the company is overseeing multiple parts of the city’s downtown revitalization, including streetscaping, infrastructure and, now, the new venue.

The facility will have 4,930 seats, 3,218 of which will be fixed seats. Other seating options will include luxury suites, a party deck, berm seating, dugout box seats, a picnic terrace, an outfield bar, right field boxes, and 6,000 square feet of club and banquet space.

The new stadium is being billed as a future home of other sports and entertainment, according to a news release. That would include concerts, an expansive events and meeting space, a public park with restrooms and a kids’ zone.

The project will be financed through limited obligation bonds, which are expected to be approved through the North Carolina Local Government Commission on Oct. 2.

“This is the right choice for Kannapolis,” City Manager Mike Legg said in a news release. “The momentum of this facility has already garnered commitments of $128 million in investments in our downtown including apartments, a brewery, restaurants, office space and potentially a hotel.”

Legg said city officials have spoken to “hundreds of business owners and developers,” each reporting that without the sports and entertainment venue, the new investment would not be happening.

The venue will be leased by Temerity Baseball LLC, the tentative new owners of the minor-league Intimidators pending expected final approval by the South Atlantic League in mid-October.

Temerity plans to purchase the team from current owner Reese Smith III, who purchased the team in 2016.

“As a lifelong baseball player and fan, I look forward to partnering with the city of Kannapolis in bringing a great baseball and entertainment experience to the city,” said Andy Sandler, chairman of Temerity Baseball. “Our Temerity team is all in on Kannapolis.”

According to the 30-year lease, Temerity will pay the city $450,000 annually for the first three years. Lease payments would increase $35,000 every three years thereafter.

Some $100,000 of the lease payments will be put into a capital fund, with the city matching that money dollar for dollar.

The lease also requires Temerity to provide a city suite, employee nights, and eight annual city-sponsored events with 25 percent of concession sales going to the city.

The ballpark must be open for public use during a predetermined time period for eating meals, walking the concourse and more activities.

The city will in turn provide the team with 50 designated parking spaces downtown and space for team offices, a ticket office and a team store.

Mayor Darrell Hinnant said the stadium is a critical part of bringing investment and life back downtown.

“The sports and entertainment venue is the catalyst we need to ensure the success of our vision,” Hinnant said. “This is an asset which will continue to bring long-term investments to our city for decades.”

Citizens Academy gives a day in the life of city services

SALISBURY — A weekly class is giving some Salisbury residents a tour of how the city operates. Salisbury Citizens Academy... read more