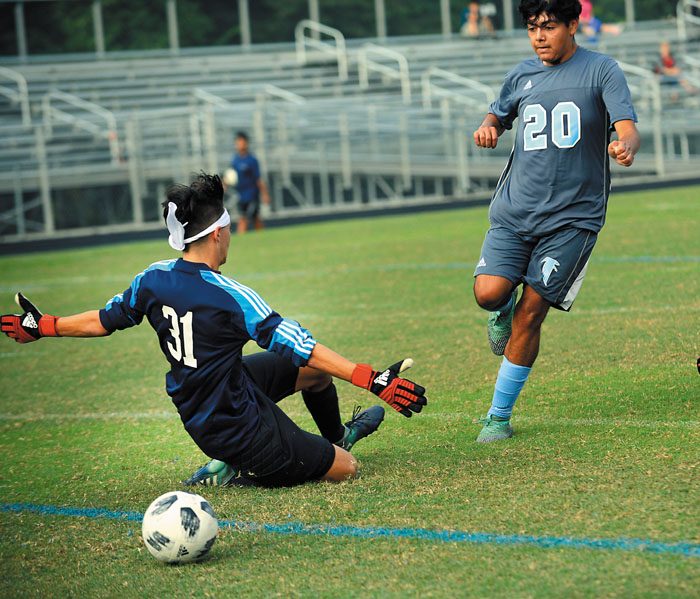 The Falcons — winners only once in 10 non-conference matches against upscale opponents — looked like an entirely different squad on Monday, when they kicked off their NPC season with a convincing 5-2 victory over visiting East Rowan.

“We’re playing together and doing the simple things right,” said first-year West coach Alan Puglia. “All of these boys are so passionate about soccer.  They eat, breathe and sleep soccer — and they see how all these top-level players and teams do things and get rewarded. What they don’t see is how those top players and teams have playing simple down pat.”

Their vision may have sharpened against East. West (2-7-2 overall) launched 18 shots-on-goal, scored in bunches and did its best to contain Alex Kalogeromitros — the striker without a mute button who scored his 26th and 27 goals for the Mustangs.

“Simple. We have a new coach and that’s what he talks about,” said West senior Jose Guerrero. “All he wants us to do is play simple soccer.”

Guerrero opened and closed the scoring for West — and did it in unsophisticated fashion. He gave the Falcons a 1-0 lead late in the first half when he settled an entry pass from midfielder Michael Leon near the left post, then found the time to stop, turn and unleash a low beamer past East goalkeeper Ben Shoemaker.

“Just trying to make a smart play,” Guerrero said. “I knew I could get there with my speed, but he halfbacks do most of the work. The forwards, we just have to finish plays.”

Only 5:16 remained in the half when West struck again. This time junior Jose Mejia-Osornia attacked the net alone from the left lane and seemingly dribbled the ball over the goal line. It further frustrated Kalogeromitros, who was double-teamed and harassed throughout the match. His two best scoring chances in the first half came on 40-yard drives that cleared the end line.

“It’s tough because you have to find a way to play around all that,” he said. “I started out playing on top. Then I got put in the middle and then back on top. Nothing really worked because West is a good, coherent team. All their players know where to be and when to get there.”

West got there again before the second half was four-minutes old, when tri-captain Stevenson Lopez took a feed from Estaban Trujillo and pushed a shot past Shoemaker for a 3-0 lead. “The keeper actually bobbled the ball for a second,” Stevenson reported. “You just have to keep playing until you hear a whistle.”

Five minutes later, Kenneth Ortiz converted a give-and-go wall-pass from Guerrero and a rout was imminent — until Kalogeromitros broke out of his personal Alcatraz and scored two quick goals. First, he pounced on a doorstep rebound and poked a shot past West keeper Jacob Joseph with 30:23 remaining. Seventy seconds later, he found a crease down the middle and beat Joseph on a breakaway.

“Alex is topping 3A in scoring, so we know teams are going to be doubling him from now on,” said East coach David Whitaker. “We have to expect that more now that we’re into the conference. Everybody knows who he is, top to bottom. There’s no secret anymore. He does what he does, but we’ve got to find someone else who can score.”

Credit the defensive play of West fullback Elmer Barahona-Figueroa, a senior who provided deliverance — not dominance — while marking Kalogeromitros.

“He says he treats every player the same,” said Lopez, who translated for Barahona-Figueroa. “If he knows he can stop them, he’ll stop them. But against Alex, he says he wouldn’t let him breathe with the ball.”

This time he succeeded — and it’s all part of the new doctrine Puglia is trying to install at West.

“We want teams to play us and say, ‘Wow, this isn’t the same West Rowan team we’ve seen in the past,'” he said. “That’s what I want these boys to know. This isn’t every other year for them. They’re so used to getting beat. This is a new season.”

Lopez may have summed it up best when he said: “We’ve been unlucky so far, but that’s about to change. We’re going to show everyone that we’re not an easy team to play.”

NOTES: West snapped a two-game losing streak, both by shutouts. East (3-6-2, 0-1 NPC) had won three of its previous four matches. … Guerrero’s goals were his fifth and sixth of the season. Shoemaker finished with 13 saves. … Both teams resume conference play on Wednesday. West plays at South Iredell and East visits Carson.