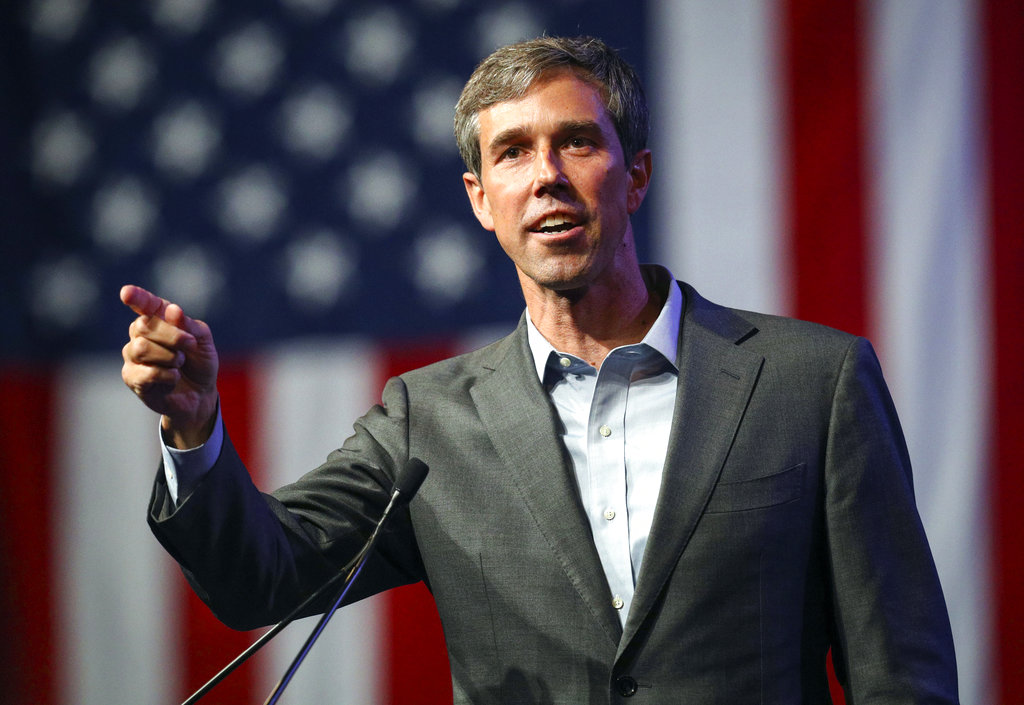 Beto O'Rourke speaks during the general session at the Texas Democratic Convention in Fort Worth, Texas in June. He is running against U.S. Sen. Ted Cruz, a Republican. (AP Photo/Richard W. Rodriguez, File)

In the U.S., voters are often drawn to candidates who seem to be the opposite of the incumbent president — the anti-Obama, the anti-Bush, the anti-Clinton.

Beto O’Rourke, now running for the Senate in Texas against Republican incumbent Ted Cruz, is the anti-Trump.

O’Rourke is a unifying force. He’s charitable to political opponents. He casts those who disagree with him in a generous light. He insists that despite those disagreements, we are united in our commitment to large ideals.

O’Rourke has been compared to Robert F. Kennedy Jr. in his 1968 campaign. But he also has a large dose of Ronald Reagan in 1980.

Like Kennedy in 1968, O’Rourke is a terrific listener. He has a unique capacity to defuse tense situations and to guide tough conversations. As a campaigner, he has a sympathetic understanding of people with diverse points of view.

Like Reagan, O’Rourke has a generous, sunny, optimistic disposition. He comports himself with dignity. In an angry time, he can disagree without being disagreeable.

In their different ways, Kennedy and Reagan were also divisive figures. O’Rourke really isn’t, at least thus far. He deplores polarization (and often says so). He is acutely aware that social divisions, and accusations of bad faith, are disabling the search for pragmatic solutions.

Many people outside of Texas got their first sense of O’Rourke last month, when a video of his answer to a citizen’s question about whether it is disrespectful of some National Football League players to refuse to stand for the national anthem went viral.

O’Rourke began by emphasizing that “Reasonable people can disagree on this issue. Let’s begin there. And it makes them no less American to come down on a different conclusion on this issue, right?”

In reciting some of the achievements of the civil rights movement in the 1960s, O’Rourke linked those achievements to the heroic efforts by America’s veterans to safeguard our liberties. Just as members of the military put their lives on the line “on the battlefields of Omaha Beach,” so too “the freedoms that we have were purchased” by “peaceful, nonviolent protests.”

In O’Rourke’s view, those who protest the killing of innocent Americans – “nonviolently, peacefully” – are acting in that tradition. O’Rourke’s conclusion: “I can think of nothing more American than to stand up or take a knee for your rights.”

Like Reagan, O’Rourke knows how to mix gentleness with moral commitment. Like Reagan, he uses the word “American” with reverence. He gives people a sense that he is on their side, not in their face.

In terms of his political positions, O’Rourke isn’t easy to pigeonhole; he’s creative and impressively unpredictable. A firm advocate of health care for all, he also received a pretty solid score from the U.S. Chamber of Commerce in 2017 – as good as or better than all but one of the current Democratic senators.

Since he was elected to the House of Representatives in 2012, he has been focused on veterans and on improving the U.S. Department of Veterans Affairs, with special attention to mental health. He opposes President Donald Trump’s plan to build a wall between Mexico and the U.S., but one of his key reasons might be new to you: He objects that the government’s use of eminent domain, to take the property of local landowners, would compromise property rights. In that respect, he embraces a longstanding argument of Republicans and political conservatives.

But what makes O’Rourke so unusual is his consistent rejection of we-they politics – of anything that smacks of Manichaeism. He likes to say, “We’re not running against anyone, any party, or anything.” He stresses the importance of working “with everyone – Republicans, independents, Democrats alike – to get the job done.” He adds, “We will not allow anyone to be taken for granted or written off.”

O’Rourke can also combine charity with toughness. In his recent debate with Cruz, the candidates were asked to identify something they admired about their opponent. O’Rourke’s response was gracious: “I have no question that Senator Cruz wants to do the best for America, and he does so at great sacrifice to his family and to his kids,” and ended, “I thank you, Senator Cruz for your public service.”

Cruz took a different approach. He told his opponent that “You are absolutely sincere, like Bernie [Sanders], that you believe in expanding government and higher taxes.” O’Rourke’s response to Cruz was understated, devastating and also Reaganesque: “True to form.”

These are difficult and potentially even dangerous times for the United States. In Washington and in political campaigns, ugliness is being met with more ugliness. O’Rourke is the kind of politician the nation needs now, and for one reason above all: He is full of grace.

Sunstein is a Bloomberg Opinion columnist. He is the author of “The Cost-Benefit Revolution” and co-author of “Nudge: Improving Decisions About Health, Wealth and Happiness.”