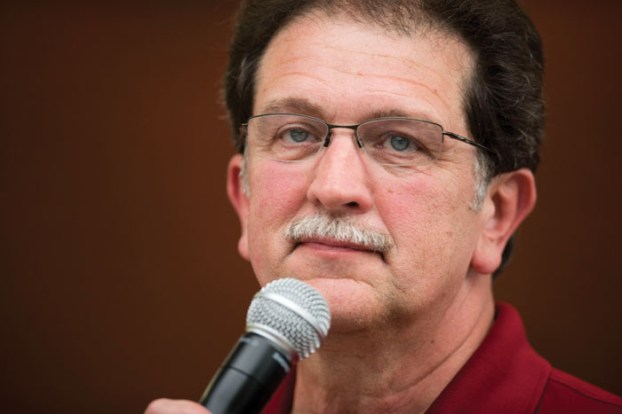 JON C. LAKEY / SALISBURY POST Salisbury vocalist Neal Wilkinson. Rain did not mute the thrill of the gathering in the open air for the 12th annual Salisbury Symphony Pops at the Post concert in downtown Salisbury on Saturday evening. Saturday, June 4, 2016, in Salisbury, N.C.

SALISBURY — Neal Wilkinson of Salisbury has been involved with the FFA (formerly Future Farmers of America) since junior high, when he attended a state convention with an older brother.

Ask him, and he can recite the FFA creed. He still has his blue corduroy FFA jacket with gold lettering hanging in the closet, though it has shrunk — or he has expanded over the years.

He progressed through every level of FFA from the greenhand degree, to state degree, to high school chapter president at South Rowan. He then became a state officer while attending N.C. State University, before achieving the American FFA degree in 1977.

Over the four decades since college, Wilkinson has remained actively involved in the FFA, judging contests on local, state and national levels; training contest teams; becoming an lifetime alumni member; attending a few national conventions; and working with and supporting FFA programs at South Rowan, West Rowan and East Rowan.

“It’s impressive to me to see students at the high school level who still understand respect and importance of leadership development,” Wilkinson says. “The organization, to me, gives students an opportunity to develop leadership skills and the day-to-day applications of these skills.”

Wilkinson says he learned things in FFA as a high school and college student that he thinks he still uses on a daily basis.

So it’s the highest of honor for Wilkinson to learn he will be awarded the Honorary American FFA Degree at the 91st National FFA Convention & Expo in Indianapolis in October.

It’s sort of the Hall of Fame for FFA.

Wilkinson will receive a certificate and medal, and his name will be permanently recorded among the FFA’s best.

“It’s hard to wrap my brain around,” Wilkinson says. “You never really plan or anticipate something like this.”

Wilkinson intends to accept the award in person at the Indianapolis convention. The Honorary American FFA Degree will be presented on stage during the fourth general convention session at Bankers Life Fieldhouse.

A reception in his and other recipients’  honor will be held later at the Omni Severin Hotel in Indianapolis.

“Without the efforts of highly dedicated individuals,” an organization press release said, “thousands of young people would not be able to achieve the success that, in turn, contributes directly to the overall well-being of the nation.”

Members of the National FFA Organization’s board of directors approved the nomination, which originated with South Rowan High’s FFA instructor, David Overcash.

The nomination then had to be approved at the state FFA level before going onto the national office in Indianapolis for consideration.

The National FFA Organization provides leadership, personal growth and career success training through agricultural education to 669,989 student members who belong to one of 8,630 local FFA chapters throughout the United States, Puerto Rico and the U.S. Virgin Islands.

The organization is also supported by 344,239 alumni members in 2,051 alumni chapters in the country.

“It’s a great organization that I firmly believe in,” Wilkinson says.

Wilkinson’s involvement in FFA-related activities started at Corriher-Lipe Junior High, even before he earned greenhand status at South Rowan High School, where he would serve as chapter president in his junior and senior years.

When he attended his first state convention as a rising ninth grader at the invitation of Bruce Miller, the FFA advisor at South Rowan, he was strictly an observer.

“But I saw some things in the organization and membership that I wanted to be a part of,” Wilkinson says. “I’ll never forget seeing the state officers walk into the opening session.”

It was then, Wilkinson acknowledges today, somewhat sheepishly, that he sat down and plotted a strategy to become a state officer.

While going to high school, Wilkinson worked on the Ritchie Brothers Farm in China Grove as a way for meeting their required supervised agricultural experience (SAE) for FFA.

As a judge in later years, Wilkinson often has specialized in parliamentary procedure contests. He also has found the extemporaneous, public-speaking contests to be rewarding not 0nly for the contestants but the judges as well.

Those participants have a limited amount of time to research and prepare their talks, then have to support their view as they are asked questions from the judging panel.

“I’ve watched kids who were very introverted who have just blossomed,” Wilkinson says.

Wilkinson, 61, is a senior quality systems auditor for NTA, based in Nappanee, Indiana. He’s part of an oversight agency that goes into manufacturing facilities, pulls their quality assurance and work records and makes sure they are complying as needed.

He’s also known as an accomplished singer, having appeared in many local productions in addition to singing the national anthem at some national sporting events, most notably major league baseball games.

Wilkinson says he has seen numerous local leaders — and teachers, especially — emerge from the FFA program.

And having gone to some national conventions in the past, Wilkinson says it’s always a matter of pride to see all the young FFA members wearing their blue jackets, while also witnessing alumni such as him honored for their continued service.

The convention is Indianapolis’ biggest. Last year, Wilkinson says, 365,000 members were registered to attend. This year, some 67,000 students alone will be going.

He can’t wait for his wife, Sandra, to see it.

‘He’s a miracle all the way around’: Victorino Lobos brings his Guatemalan story to Salisbury