Steve & Cokie Roberts: The best and worst of America 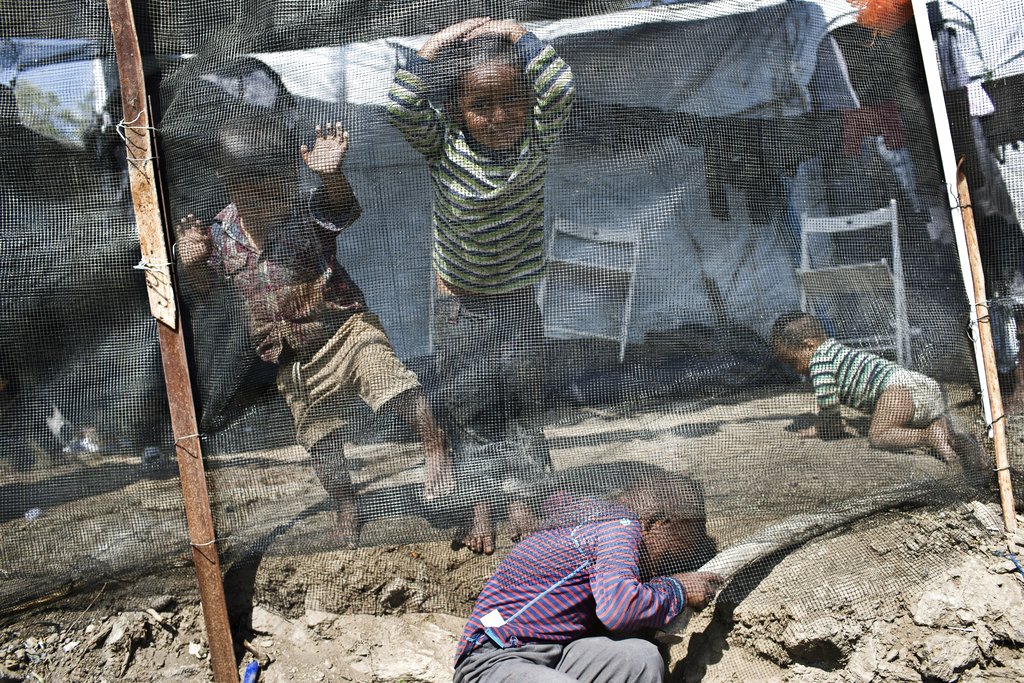 May 2018 file photo, children play inside the Moria refugee camp on the northeastern Aegean island of Lesbos, Greece. The jammed Moria camp on the Greek island of Lesbos and the dangerous migrant detention centers in Libya serve as a sober reminder to European leaders that their statistical success in curbing migration into the continent has spawned what the U.N. and others condemn as massive humanitarian failures. (AP Photo/Petros Giannakouris, File)

Here is America at its best: Faith-based organizations across the country are volunteering to help resettle refugee families in their communities. In the Maryland suburbs of Washington, D.C. where we live, Christian, Jewish and Muslim congregations have formed a partnership called Neighbors to welcome these forlorn foreigners to their new homes.

Here is America at its worst: The Trump administration announced that it is slashing the quota of refugees the U.S. will accept in the next fiscal year to 30,000, the lowest total since the modern refugee system was established in 1980. But the actual number will probably fall well below that limit, since the administration is doing everything possible to throttle the refugee program and will admit only about 21,000 in the fiscal year ending this month.

Slamming the door on refugees comes at a terrible time, since more than 68 million people worldwide have been displaced from their homes — more than half of them children, according the United Nations High Commissioner for Refugees. Of those, about 20 million are refugees, meaning they’ve been exiled from their native countries.

“It is becoming increasingly clear that the goal of this White House is to cripple the U.S. refugee program,” said J. Kevin Appleby of the Center for Migration Studies to the New York Times. “Not only do they reduce the number to record-low levels, they have no intention of even meeting that number during the fiscal year. It further weakens our moral authority and leadership in the world.”

Secretary of State Mike Pompeo cited “national security interests” as a prime justification for reducing the quota, but that is a flat-out falsehood. As Leon Rodriguez, who handled refugee issues in the Obama administration, told us, “The reality is that since Sept. 11, we have not had someone admitted as an adult commit an act of terrorist violence in the U.S.”

An administration official admitted in The New Yorker, “None of these threats the president keeps talking about exist.” David Bier of the libertarian Cato Institute added that the chances of a U.S. resident being killed by an immigrant terrorist is 1 in 328 million.

The real reason for strangling the refugee program is politics. President Trump has made stoking anti-immigrant hysteria a core part of his political strategy since announcing his run for president, and he strongly believes the issue galvanizes his base.

Moreover, as Trump candidly admitted during a rally last April, “The Democrats actually feel — and they are probably right — that all of these people pouring across are going to vote for Democrats. Not for Republicans.”

Clamping down on refugees is only part of a larger game plan to block foreigners at every possible portal, from imposing a “zero tolerance” policy on undocumented border crossers to cracking down on employers that hire illegal workers.

Invoking “national security” reasons for these policies is only one of many lies told by the White House. They also argue that foreigners damage the economy by draining resources and stealing jobs, when the exact opposite is true.

Two veterans of the Obama state department, Ariana A. Berengaut and Antony J. Blinken, wrote in the Times that it is “economic malpractice” to bar refugees. “Refugees return more in taxes than they receive in benefits, revitalize towns whose best days seemed behind them and enrich the United States with new energy, ideas and businesses,” they wrote.

Moreover, welcoming refugees benefits America internationally as well as domestically. “The refugee resettlement program is about so much more than just saving lives,” Melanie Nezer, senior vice president at the Hebrew Immigrant Aid Society told Politico. “It’s also a diplomatic tool, a foreign policy tool; it stabilizes countries that are hosting the refugees.”

That tool is especially important in keeping promises to foreign friends. The New Yorker reports that there is a backlog of 58,000 Iraqis “who have helped U.S. ground forces in some fashion and remain at risk of being targeted as a result.” Yet barely 100 Iraqi refugees have been admitted this fiscal year.

Reducing the refugee program has another cost, too: suffocating the generous spirit and goodwill of faith-based communities who are ready and eager to resettle foreigners. Those communities embody exactly the sort of from-the-ground-up, locally based volunteer efforts conservatives always glorify — and rightly so — yet this White House is driving them out of business.