NFL player, once part of human trafficking, has huge game 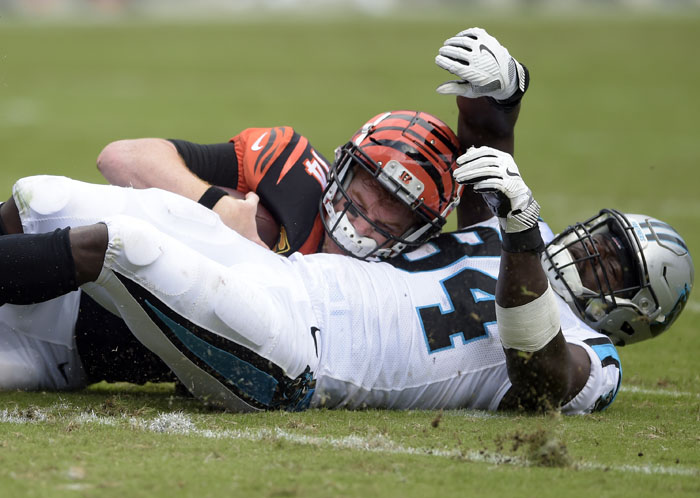 CHARLOTTE (AP) — Panthers defensive end Efe Obada exploded off the corner, bolted past Bengals tight end C.J. Ogbuehi and crashed into quarterback Andy Dalton for his first career sack and a 10-yard loss.
He screamed to his teammates, “They don’t know me! I’m from London! They don’t know me!”
The Bengals probably didn’t — or at least maybe they didn’t know his incredible story, when he overcame being a victim of human trafficking as a 10-year-old in the United Kingdom to become an NFL player.
The Nigerian-born Obada, the first player to make an NFL 53-man roster from the new International Pathways Program, had a huge performance in his first NFL game with an interception, sack and two quarterback pressures to help Carolina beat the Cincinnati Bengals 31-21 on Sunday.
Obada is living a made-for-Hollywood movie, although he has kept most of the details of his painful past to himself because he has “deep trust issues” and is still working through the emotional impact being trafficked had on his life.
What he has disclosed is that he and his older sister were abandoned in the streets of London after their mother arranged to have them sent to the United Kingdom — with someone who turned out be a stranger — so they could have a better life. The stranger who was supposed to take care of the children didn’t carry through on the promise. Instead, they were left alone and homeless in a strange country.
They learned to survive until they were discovered and placed in foster care, and they moved from home to home until old enough to be on their own.
“Some of the issues, I haven’t dealt with,” Obada told The Associated Press earlier this month. “I haven’t really taken time to understand. … Right now I just want to focus on football and make the most of it.”
Obada briefly found solace in a gang before discovering football at age 22. He played for the London Monarchs, where he was eventually discovered by the Dallas Cowboys. But he couldn’t make their roster.
He was given another chance through the International Pathways Program, created in 2017 that sends four players to different teams. The Panthers happened to land Obada — and he made an impression right away on coach Ron Rivera.
“I’m telling you, Ron Rivera has talked about him since the first day of training camp,” Panthers general manager Marty Hurney said. “He saw special qualities in him. He got his chance to play today and he did fantastic.”
Obada, now 26, learned earlier this week he was going to be activated for the game when he found his jersey on his chair in front of his locker. He was overcome with pride.
“He deserved the opportunity,” Rivera said.
On Sunday, Obada showed early on the stage wasn’t too big, breaking past a blocker and tackling Dalton in the second quarter and stripping the ball. The Panthers recovered and his teammates celebrated wildly. But officials overturned the call to an incompletion after watching it on replay.
He didn’t let that affect him.
With Carolina leading 21-14 in the third quarter, Dalton threw short over the middle and cornerback James Bradberry deflected the ball into the air. Obada dived to make the interception — something he’d never done before in his life.
The Panthers scored seven plays later to take a 14-point lead.
He didn’t stop there.
With the Bengals trailing 28-21, the 6-foot-6, 265-pound Obada sacked Dalton at his 7-yard line with 4:21 left. On the next play, Dalton threw downfield and was intercepted by Donte Jackson, leading to Carolina’s clinching field goal.
“You could see it in his eyes,” Panthers linebacker Shaq Thompson said. “Right before the sack I told him, ‘Big-time players make big-time plays.’ And the next thing you know, he got a sack.”
Rivera rewarded Obada with the game ball for his effort.
“I’m over the moon,” Obada said. “Words can’t describe how I feel. I’m so happy.”
Teammates were thrilled for Obada — but not necessarily surprised.
“I’m so happy for him,” safety Mike Adams said. “When he’s yelling, ‘They don’t know me! I’m from London!,’ I’m just laughing. This guy has worked so hard. He’s worked his butt off to get here. And he made the most of his opportunity.”
Obada said he is determined to make sure this is only the beginning of his success in the NFL, and that before long everybody knows his name.
“I don’t want to be a one-hit wonder,” Obada said. “It’s about creating that momentum and keep going and working hard. I’m going back in the lab and preparing for the next opponent.”

Tiger Woods caps off amazing comeback with a win