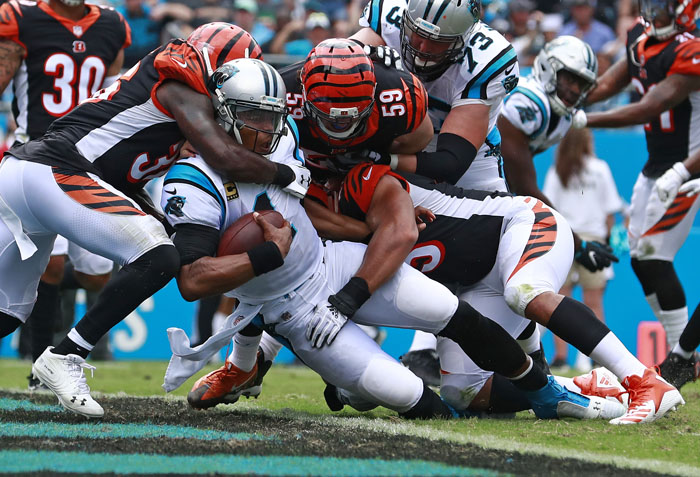 Carolina Panthers' Cam Newton (1) poses over the goal line for a touchdown against the Cincinnati Bengals during the second half of an NFL football game in Charlotte, N.C., Sunday, Sept. 23, 2018. (AP Photo/Jason E. Miczek)

CHARLOTTE (AP) — Panthers coach Ron Rivera wanted a little something more from his offense, which is why he turned to his old boss Norv Turner as the team’s new coordinator this season.
Rivera, who once coached under Turner in San Diego, said he got exactly what he was hoping for Sunday.
Cam Newton threw for two touchdowns and ran for two others , Christian McCaffrey racked up a career-high 184 yards rushing and Carolina handed the Cincinnati Bengals their first loss of the season 31-21 behind a well-balanced offensive attack.
“We want to impose our will,” said Newton, who praised Turner’s play calling. “We are a team that can attack a defense in many different ways. As the game progresses I see the body language of defenders and they are wearing down.”
Newton completed 15 of 24 passes for 150 yards and ran for 36 yards as the Panthers (2-1) won their seventh straight home game going back to last season.
McCaffrey, who tied a franchise record with 14 receptions last week against Atlanta, did his damage on the ground this time. He surpassed his previous career high of 66 yards rushing and became the first player in franchise history to post a 100-yard receiving game and a 100-yard rushing game in back-to-back weeks.
Newton believes McCaffrey’s 28-carry outing will dispel myths he’s just a scat back.
“He’s a total running back,” Newton said. “… This is not a fluke. He has been doing this his entire career, collegiately and professionally. The fact that we have a special talent, you can’t really gear in using packages for him.”
McCaffrey said the labels “definitely” bother him, but has learned to deal with them.
“The more and more I go through this league I learn that it’s never been about proving anyone wrong or proving anybody right,” McCaffrey said. “It’s proving myself right, and that’s the biggest thing that I’ve had to mentally take over as I continue to grow.”
When the Panthers weren’t running McCaffrey, they used him as a decoy.
On one Turner play call, Newton sold a fake pass to McCaffrey and came back to the other side of the field to hit backup running back C.J. Anderson for a 24-yard touchdown on a screen play. The Panthers call it their Pony 21 set, which features McCaffrey and Anderson, a 1,000-yard rusher last season with Denver, in the backfield.
“This is a different style of offense, the way they attack,” Bengals coach Marvin Lewis said. “We have to adjust and morph and play in it and make sure we stay sound in it. You have to be good for the whole ballgame. There were times we were perfect and times we were not.”

GREEN DAY
Bengals wide receiver A.J. Green, who had three touchdowns last week against the Ravens, left on the third play in the third quarter with a groin injury when he was hit while trying to make a catch over the middle. He did not return.
Green said after the game he was starting to feel better and expects to play next week against Atlanta.
“At first, I thought I’d just knocked the air out of myself and just needed to catch my breath,” Green said. “When I got up and running, I was pretty sore.”

YOU GOTTA OBADA
Efe Obada, the first player to make a 53-man roster from the recently formed NFL International Pathways Program, turned in a huge game in his first NFL appearance, getting an interception, a key fourth-quarter sack and two quarterback pressures on Dalton. One of his pressures was initially ruled sack-fumble in the second quarter, but later overturned by instant replay to an incomplete pass.

DALTON’S DAY
Andy Dalton was 29 of 46 with two touchdowns, but was intercepted four times, including twice by rookie cornerback Donte Jackson. Carolina’s defense, which allowed 432 yards and 31 points to the Falcons last week, held the Bengals (2-1) to 66 yards rushing without Joe Mixon in the lineup.

ON THE FUMBLE
Newton took a lot of heat for not jumping on a loose football in a Super Bowl 50 loss to the Denver Broncos, so he wasn’t going to risk losing another in the fourth quarter with the Panthers clinging to a 28-21 lead. After a strip sack, Newton beat three Bengals players to the ball to maintain possession.
“Come hell or high water I was going to get that fumble, how about that?” Newton said. “I’m just trying to create good habits.”

UP NEXT:
Bengals: Visit the Falcons next Sunday.
Panthers: Have a bye next week, then host the Giants on Oct. 7.