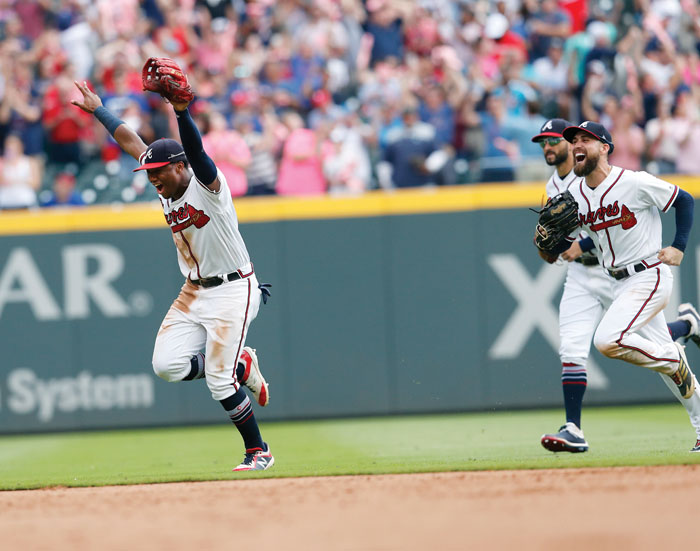 This was just how the longtime star first baseman envisioned it when the Atlanta Braves began spring training seven months ago.

“You could tell after the first week of workouts that we had the talent to do something special,” Freeman said. “Obviously we still needed to put it together. But this is what happens. You win the division after three straight 90-loss seasons.”

The Braves capped a most surprising season by clinching their first NL East crown since 2013, with Mike Foltynewicz taking a no-hitter into the seventh inning Saturday in a 5-3 win over the Philadelphia Phillies.

A year after going 70-92, manager Brian Snitker and his Baby Braves surged back into the playoffs. A loud crowd at SunTrust Park joined the party when rookie Ronald Acuna Jr. caught a flyball for the final out, setting off another round of the Tomahawk Chop and a big celebration on the field.

“When we started this series, we knew it was within our grasp,” Snitker said. “We knew we couldn’t lose track of today. I know I’m redundant saying that all the time, but I felt we just needed to stay current and worry about today’s game. These guys have done an unbelievable job of that this year.”

The Braves will make their first postseason appearance since 2013 on Oct. 4 in the NL Division Series. It has not yet been determined who or where the youth-filled club will play in the best-of-five round. Atlanta won its 18th division title, tying the New York Yankees for the most in the majors since division play began in 1969.

The Braves won their fourth straight game and beat second-place Philadelphia for the third day in a row. The Phillies also startled a lot of fans this year and led the division in early August, but faded while going 6-14 this month.

Foltynewicz (12-10) tipped his cap to a standing ovation as he left with runners on first and second in the eighth with a 4-0 lead.

Kurt Suzuki added an RBI single to make it 5-3 in the eighth off Seranthony Dominguez, the seventh pitcher used by Philadelphia.

Arodys Vizcaino, in his first save situation since June 17, closed out the ninth for his 16th save in 18 chances, getting Wilson Ramos to ground out, striking out Roman Quinn and retiring Maikel Franco on a flyball to Acuna in left.

“I didn’t do my job today,” Arrieta said. “You’ve got tip your cap. They won the division. They really did. This wasn’t something that started today, obviously. Individually, the last month I haven’t been very good, and we didn’t take care of business. We just didn’t get the job done. They did.”

Atlanta led 2-0 in the first when Arrieta walked three of his first four batters, and Johan Camargo hit a two-run single.

Freeman hit a two-run single in the second to make it 4-0. Freeman, one of two current Braves who played on the 2013 division-winning team —along with pitcher Julio Teheran — is hitting .389 over his last 14 games.

“When Franco hit that ball, I put my hands up right away,” Freeman said. “It means everything. This is goal No. 1. It’s celebration No. 1. We’ve still got three more we’ve got to do. We’ve got 11 wins to get in October. We’ve still got to take care of business, but, man, is this a great feeling.”

Foltynewicz didn’t permit a hit until Odubel Herrera singled to begin the seventh. Franco singled with one out in the eighth.

The 26-year-old Foltynewicz has matured in his third full season, earning his first All-Star appearance and posting a 2.88 ERA that’s almost two full runs lower than his career average entering the year.

“We knew we had something special since day one,” he said. “We’ve been telling you guys that all year, but to be able to do it and pull it off is pretty special. They got four runs for me today, which was a good confidence builder to go out there and be aggressive.”

Atlanta was not projected to contend when the season began. It was coming off three straight 90-loss seasons, had no proven ace and was counting on several young position players to complement Freeman, the lone big bat in the lineup.

The team had been embarrassed off the field with former general manager John Coppolella banned from baseball in a signing scandal, but Atlanta moved into first place on May 2 and never trailed in the division race after a 9-1 win over Miami on Aug. 13.

New GM Alex Anthopolous watched his team arrive earlier than he expected. When spring training began, he didn’t think the team would be a serious contender until next year.

“No, I’d lying through my teeth if I thought that,” Anthopolous said. “I thought we have a really talented team with high draft picks. We have the potential to be really good and have a chance to get better. We certainly exceeded all those things. Snit, the coaches, the players — they’re the ones who deserve all the credit for the year we put together.”

Philadelphia faltered down the stretch under first-year manager Gabe Kapler. After winning on Aug. 5, the Phillies were 1½ games ahead in the division and 15 games over .500. They have since gone 15-28.

“I think this is a really important moment to reflect back to the beginning of the season and really the offseason,” Kapler said. “If we said that we were going to be playing a meaningful game on Sept. 22, I think a lot of people would’ve said that’s not a reasonable thought.

“On the flip side, this is ultimately a stain. This hurts, but I’m ultimately proud of the guys for putting us in this position and to be fighting in Atlanta kind of the season on the line today.”

Arrieta lasted 2 1/3 innings in a loss for the Chicago Cubs at Pittsburgh in his previous shortest outing Sept. 4, 2017. The Phillies dropped to 14-16 in his starts as Arrieta posted a 6.18 ERA and went 1-4 over his last eight outings.