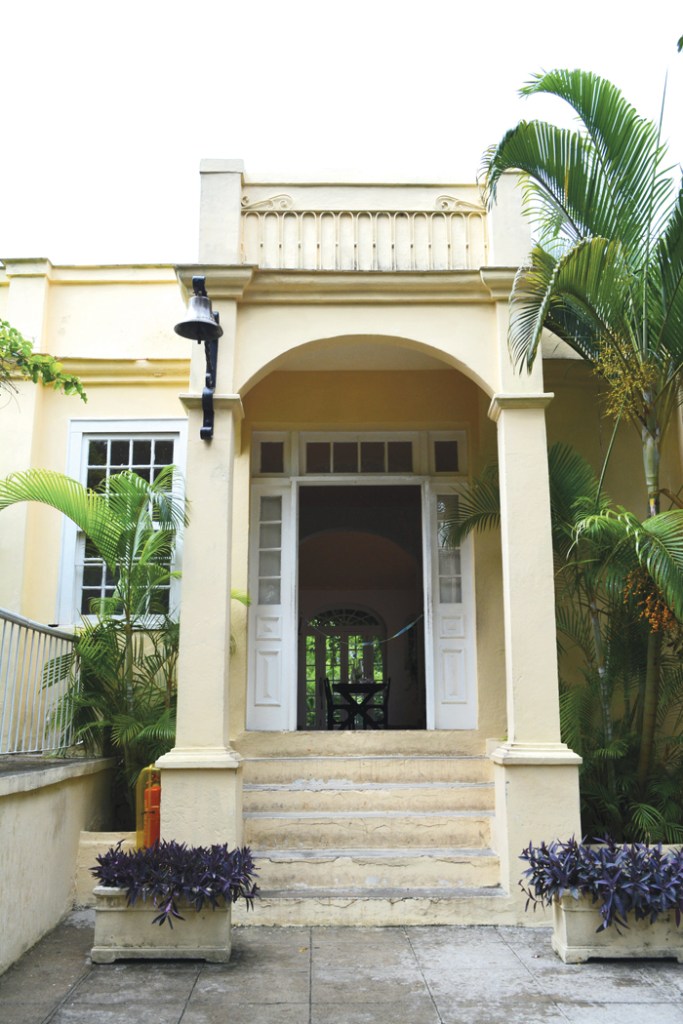 HAVANA, CUBA — I’ve been trying to remember how long ago I got enamored with the writing of Ernest Hemingway. Maybe it was in high school, but more likely college. When I did some post-grad work at Catawba, I again encountered Hemingway. I adored “The Short Happy Life of Frances Macomber.”

Maybe it’s the fact that he, too, had been a journalist. Maybe it’s because of his direct and unadorned prose. (Remember the joke — Why did the chicken cross the road? Hemingway’s answer would have been “To die. In the rain. Alone.”)

It’s hard to explain why I love his writing so much. I just do. 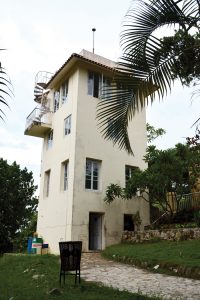 Although the property has this unique writing tower, Hemingway preferred to write in the house.

At Finca Vigia (Lookout Farm), he wrote “For Whom the Bell Tolls” and “The Old Man and the Sea.” The latter was his last work of fiction, and it won the Pulitzer Prize in 1953. Hemingway was awarded the Nobel Prize for Literature a year later.

Even though you can’t go into the home — which was recently restored thanks to unprecedented cooperation between the U.S. and Cuba — you can look into nearly all the rooms. The tour guides who work there are more than happy to photograph the rooms for you … if you tip them.

The veranda on the back of the house has a commanding view of the city a few minutes away. Hemingway often went to the El Floridita bar in Havana to drink daiquiris —normally in prodigious numbers. His record, according to our tour guide, was 16 double daiquiris. Indeed, mini bars are set up throughout the house. 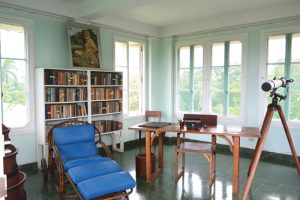 Every room — including the room at the top of the writing tower — is full of books.

I’ve often heard authors say that the best way to be a good writer is to be a good reader. There are bookshelves throughout the house (even in the bathroom — I checked). I couldn’t help but be worried about the volumes, however, as they’re pretty much exposed to the elements as the house is not air-conditioned.

You can even see rows of boots and uniforms in one of the closets. In a lot of ways, it’s like Hemingway has just stepped out for a swim (yes, there’s a pool), or more likely, a drink.

Hemingway was friends with Fidel Castro, but never got involved in the revolution. He lived there without any problems. He traveled frequently back and forth to the U.S. He and his wife were not allowed to return in 1961, however, and he never saw the house again. 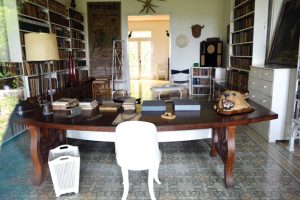 Hemingway also wrote at this commanding desk. While living in Cuba he wrote “For Whom the Bell Tolls” and “The Old Man and the Sea,” the latter of which won the 1953 Pulitzer Prize.

Still, it’s a real thrill to peek into the rooms — the house is only two rooms deep — and see what his life here must have been like. Beside the pool — empty of water — is Hemingway’s famous boat, The Pilar. He took frequent jaunts in it while in residence.

A unique addition to the house was a writing tower which his third wife had built. It’s easy to imagine him working here, although he also had a beautiful desk in the house.

Hemingway made history here,” the tour guide told us, “and he’s loved by the Cuban people.” 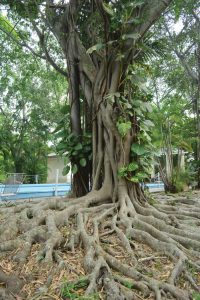 Just walking the shaded grounds of Finca Vigia was exciting.

Be a Hurley Park volunteer and keep the beauty…