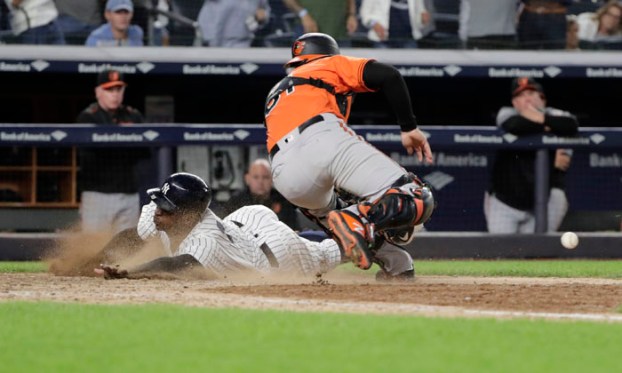 NEW YORK (AP) — Yankees shortstop Didi Gregorius has torn cartilage in his right wrist and is unsure whether he will be able to play in the AL wild-card game on Oct. 3.
Gregorius, who has 27 homers and 86 RBIs, got injured Saturday when he slid headfirst on Aaron Hicks’ 11th-inning double to score the run that clinched a postseason berth for New York, which disclosed the injury after a 6-3 loss to the Baltimore Orioles on Sunday.
New York remained 1½ games ahead of Oakland for the top AL wild card. Baltimore (45-110) is one loss shy of matching the franchise record for defeats set by the 1939 St. Louis Browns, who went 43-111.
Tim Beckham homered twice for the lowly Orioles, who trailed 3-0 early. Ryan Meisinger (2-0) pitched two perfect innings and Mychal Givens worked a 1-2-3 ninth for his ninth save. A.J. Cole (3-1) was the loser.

TWINS 5, ATHLETICS 1
OAKLAND, Calif. (AP) — Oakland will have to take its bubbly on the road. Kyle Gibson (9-13) allowed one run over 7 1/3 innings and Jake Cave hit a two-run homer for Minnesota, which prevented the Athletics from clinching an AL wild-card berth in their last regular-season home game.
Oakland leads Tampa Bay by 7½ games and needs one win or a Rays loss to clinch its first playoff berth in four years.
Trevor Cahill (6-4) gave up five runs — three earned — and five hits in 3 1/3 innings.

RAYS 5, BLUE JAYS 2
TORONTO (AP) — Blake Snell (21-5) won his ninth straight start, striking out 11 in 6 2/3 shutout innings. He broke the Rays season record for wins set by David Price in 2012 and lowered his ERA to 1.90, the best in the AL.
C.J. Cron and Brandon Lowe homered for Tampa Bay, which remained 7½ games behind Oakland for the AL’s second wild card and would be eliminated with one more loss or win by the Athletics.
Ryan Borucki (4-5) allowed two runs and three hits in seven innings.

CUBS 6, WHITE SOX 1
CHICAGO (AP) — Kyle Schwarber connected off Carlos Rodon (6-7) for his first homer against a left-hander this season and drove in two runs as the NL Central-leading Cubs stayed 2½ games ahead of second-place Milwaukee.
Ben Zobrist had three hits and Kyle Hendricks (13-11) gave up one run and four hits in 7 2/3 innings.

BREWERS 13, PIRATES 6
PITTSBURGH (AP) — Christian Yelich hit his 32nd home run and Travis Shaw added his 31st as Milwaukee remained two games ahead of St. Louis, which is second in the NL wild-card race. Yelich finished 2 for 3, including a three-run homer in the second off Nick Kingham (5-7), to boost his batting average to an NL-leading .322.
Corey Knebel (3-3) won in relief.
Pittsburgh was eliminated and failed to reach the postseason for the third straight year.

CARDINALS 9, GIANTS 2
ST. LOUIS (AP) — Miles Mikolas (17-4) won his fourth straight start, allowing two runs — one earned — and two hits in seven innings with eight strikeouts and no walks. John Brebbia and Giovanny Gallegos finished a five-hitter.
Matt Carpenter hit his NL-leading 36th homer and St. Louis remained 1½ games ahead of Colorado, which is third in the wild-card race,
Andrew Suarez (7-12) gave up two runs and six hits in five innings. The Giants finished 31-50 on the road for a two-year record of 57-105 away from home.

ROCKIES 2, DIAMONDBACKS 0
PHOENIX (AP) — Kyle Freeland (16-7) allowed seven hits in seven innings, improving to 7-0 in his last 10 starts.
Arizona lost for the seventh time in eight games and was eliminated from contention in the NL West and wild-card races. The Diamondbacks led the division entering the final month but are 5-16 in September.
Nolan Arenado hit an RBI double in the third and Gerardo Parra had a run-scoring single in the fifth against Zach Godley (14-11), who lost his fourth straight start.
Wade Davis got three straight outs for his NL-leading 41st save.

ASTROS 6, ANGELS 2
HOUSTON (AP) — Charlie Morton left after one inning and 24 pitches because of discomfort in his pitching shoulder that caused a drop in velocity. The 34-year-old right-hander did not pitch for the Astros from Aug. 28 until Sept. 8 because of right shoulder discomfort. He won his first two starts following his stint on the disabled list, allowing four runs in 11 innings.
AL West-leading Houston opened a 4½-game lead over second-place Oakland. Yuli Gurriel hit a two-run homer, giving him three homers and 10 RBIs in the three-game series.
Framber Valdez (4-1) followed Morton and struck out a career-high nine in six innings, allowing one run and three hits. Tyler Skaggs (8-9) gave up four runs and five hits in 2 1/3 innings.

BRAVES 2, PHILLIES 1
ATLANTA (AP) — Lane Adams homered and drove in two runs, and Anibal Sanchez (7-6) won for the first time in nine starts. Sanchez allowed one run and four hits in five innings, securing his role as Atlanta’s No. 3 starter for the Division Series behind Mike Foltynewicz and Kevin Gausman.
Atlanta won its fifth straight, and Philadelphia was eliminated from postseason contention. The Braves mostly rested their regulars against ace Aaron Nola (16-6), who gave up two runs and four hits in six innings. The Phillies were swept in a four-game series in Atlanta for the first time since 1997.
Shane Carle pitched a shaky ninth for his first big league save.

RANGERS 6, MARINERS 1
ARLINGTON, Texas (AP) — Adrian Beltre was given a standing ovation when he was removed from what could be his last home game for Texas, just before the Rangers rallied for four runs in the sixth to overcome a 1-0 deficit.
The 39-year-old, playing his 21st major league season, struck out twice and is hitting .275 with 14 homers and 61 RBIs. The four-time All-Star, the active hits leader with 3,162, isn’t sure he wants to play next year.
Texas took a 4-1 lead in the sixth when Nomar Mazara chased starter Wade LeBlanc (8-5) with a two-run double, Robinson Chirinos hit an RBI single off Nick Vincent and Carlos Tocci had a sacrifice fly against James Pazos. Joey Gallo added his 39th homer, a two-run drive in the eighth against Ryan Cook.
Jeffrey Springs (1-1), the second of five Texas pitchers, allowed two hits in two scoreless innings.

MARLINS 6, REDS 0
MIAMI (AP) — A crowd of 13,595 left Miami with a franchise-low home attendance of 811,104 in Derek Jeter’s first season as chief executive officer, the first major league team to draw fewer than 1 million fans at home since the 2004 Montreal Expos. The Marlins are last in the NL East at 62-93 overall, their eighth consecutive losing season, and have not reached the playoffs since beating the Yankees in the 2003 World Series.
Rookie Chad Wallach hit his first big league home run, a three-run drive in a four-run third off Michael Lorenzen (3-2), who allowed nine hits in four innings. Trevor Richards (4-9) gave up three hits in seven innings, struck out nine and walked one.

METS 8, NATIONALS 6
WASHINGTON (AP) — Michael Conforto hit a go-ahead, bases-loaded triple in the fourth off Wander Suero (3-1), and Jeff McNeil matched a career high with four hits in raising his average to .328 in 195 at-bats since his big league debut on July 24.
The first pitch was delayed 25 minutes, and rain continued during the game, which lasted 4 hours, 14 minutes.
Drew Gagnon (2-1) pitched two scoreless innings for the Mets, who took three of four from the Nationals in the teams’ final series of the season. Anthony Swarzak got five outs for his fourth save.

By STEVE REED  CHARLOTTE (AP) — Panthers coach Ron Rivera wanted a little something more from his offense, which is... read more