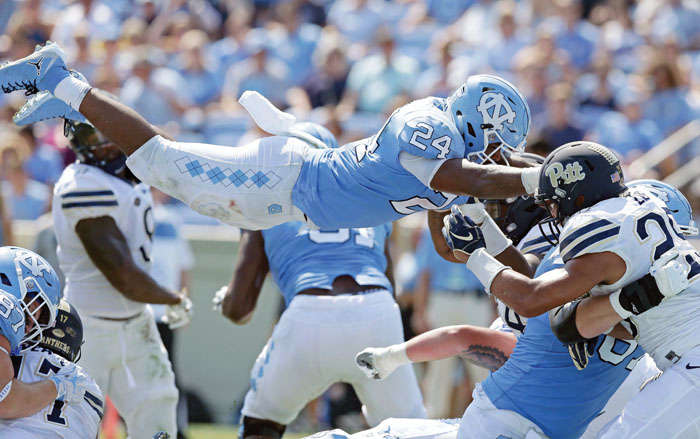 North Carolina's Antonio Williams (24) dives into the end zone for a touchdown against Pittsburgh during the first half of an NCAA college football game in Chapel Hill, N.C., Saturday, Sept. 22, 2018. (AP Photo/Gerry Broome)

HUNTINGTON, W.Va. (AP) — North Carolina State remains unbeaten after its first road trip and after being handed a week off by Hurricane Florence.

Ryan Finley threw for 377 yards and a touchdown to lead North Carolina State to a 37-20 victory over Marshall on Saturday night.

Kelvin Harmon caught six passes for 150 yards, all in the first half, and Reggie Gallaspy had two short TD runs for the Wolfpack (3-0), who never trailed in their final tuneup to next weekend’s start of the ACC schedule.

Both teams were idle last week after their respective games were called off. North Carolina State surpassed 500 yards of offense for the second straight game.

N.C. State’s C.J. Riley fumbled after a hard hit from Jaquan Yulee on a kickoff early in the third quarter. Marshalls’ Artis Johnson scooped up the loose ball and went 22 yards for a touchdown to pull the Thundering Herd within 23-17.

Finley, who completed 23 of 40 passes, then took the Wolfpack 75 yards in six plays, finding Emeka Emezie with a 30-yard scoring toss to push the lead back to double digits to stay.

CHAPEL HILL (AP) — North Carolina finally got its offense playing with sustained efficiency and its defense providing sacks and third-quarter stops, a combination that helped turn things around in its Atlantic Coast Conference opener,

The Tar Heels are hoping it helps leave that 0-2 start completely in the past, too.

Antonio Williams and Nathan Elliott turned in career-best performances Saturday in the Tar Heels’ best offensive showing of the season, helping UNC beat Pittsburgh 38-35 in its return after having a game canceled due to Hurricane Florence.

UNC (1-2, 1-0 ACC) lost at California and East Carolina to start the season, then Florence canceled last weekend’s home game against No. 16 UCF and took the Tar Heels out of in-season routines.

Williams, an Ohio State transfer, ran for 114 yards and two touchdowns, while Elliott shook off two games worth of accuracy issues to throw for a career-best 313 yards with two scores while completing 71 percent of his passes.

Just as importantly, UNC’s frequently shaky defense contributed big plays of its own and held Pitt to minus-5 yards in the third quarter.

NORFOLK, Va. (AP) — Blake LaRussa came off the bench to throw for 495 yards and four touchdowns to lead Old Dominion to a 49-35 upset of No. 13 Virginia Tech on Saturday in the Hokies’ first game at the cross-state school that restarted its football program in 2009.

LaRussa entered on ODU’s second series and completed 30 of 49 and ran for a score to lead the 28 1/2-point underdog Monarchs (1-3) to a stunning win over the Hokies (2-1) from the Atlantic Coast Conference.

Jeremy Cox’s 40-yard touchdown run with 1:34 remaining sealed the biggest win in program history. After the game, the ODU faithful stormed the field.

The Hokies (2-1) led 28-21 after a 72-yard touchdown pass from Josh Jackson to Damon Hazelton with 32 seconds left in the third quarter, but ODU scored on its next two possessions, taking a 35-28 lead on a 15-yard touchdown run by Cox with 9:57 to go – the Monarchs first lead of the game.

Things got worse for Virginia Tech, as Jackson went down with a lower leg injury on the first play of the ensuing drive. Backup quarterback Ryan Willis led the Hokies on a 75-yard march that ended with a 13-yard touchdown pass to Chris Cunningham with 7:15 remaining, tying the game at 35.

But the Hokies simply had no answer for ODU. LaRussa polished off a 75-yard drive with a beautiful 29-yard fade pattern to Jonathan Duhart for a touchdown with 5:11 left that was the game winner.

Led by LaRussa and Cox, ODU finished with 632 yards of offense.

After starter Kelly Bryant produced just 13 yards and one first down on Clemson’s first two possessions, Lawrence entered the game early in the second quarter. The youngster, a native of nearby Cartersville, quickly guided the Tigers on a seven-play, 74-yard drive capped by a 17-yard touchdown pass to Hunter Renfrow that made it 14-0.

Lawrence finished with 176 yards on 13-of-18 passing for the Tigers (4-0, 1-0 Atlantic Coast Conference), also connecting with Justun Ross for a 53-yard score, Travis Etienne on a 3-yard touchdown just before halftime and Tee Higgins for a 30-yarder in the closing minutes.

Book replaced Brandon Wimbush in the starting lineup and was 25 of 34 for 325 yards with touchdown passes covering 3 yards to Brock Wright and 7 yards to Chase Claypool, along with three short scoring runs. Book helped the Fighting Irish (4-0) more than double their season high for scoring and roll up a season-best 566 total yards.

DURHAM (AP) — Duke is getting a rare second chance at being 4-0, and the Blue Devils plan to take advantage of it.

Quentin Harris passed for 202 yards and three touchdowns before leaving with an injury as Duke beat North Carolina Central 55-13 on Saturday.

Brittain Brown rushed for 118 yards and a score and added a 44-yard touchdown catch to help the Blue Devils start 4-0 in back-to-back seasons for the first time since 1952-53.

Duke lost its next six games after the hot start in 2017, having to rally in November to earn a bowl berth.

Duke scored touchdowns on its first three possessions and piled up 628 total yards, improving to 7-0 against its city rival from the Football Championship Subdivision.

Harris, who also ran for a score in his second career start in place of injured Daniel Jones, hurt his left leg with Duke leading 34-13 early in the third quarter. N.C. Central’s Randy Anyanwu rolled into Harris’ front leg as Harris delivered a pass, and Harris limped off the field after receiving medical attention. Harris rode an exercise bike and stood with his teammates on the sideline but did not return to the game.

“I just kind of got rolled up on,” Harris said. “I felt a little something there, but I’m good to go. Everything checked out fine.”

Brown had departed two plays earlier with an injured left arm and did not return. Duke coach David Cutcliffe said that Brown was cleared to return but that he held out the running back as a precaution.

Isaiah Totten rushed for 88 yards and a touchdown for N.C. Central (1-2). Totten, who had a 59-yard run in the first quarter, missed the second half with an injured left shoulder.

The Eagles finished 1 of 14 on third down and had just 8 total yards and one first down in the second half.

N.C. Central: The Eagles were full of fight, if not flight, for a half. They trailed 20-13 late in the second quarter after falling behind 20-0 in the game’s first nine minutes. “I know right now in my heart, I’m really proud and I’m pleased that we played a good half of football against a solid football team,” N.C. Central coach Granville Eastman said.

Duke: The Blue Devils got off to a fast start before getting sloppy in the second quarter. Part of the problem was uneven play from Harris, who misfired on several passes to open receivers. Jones is trying to return ahead of schedule from his broken clavicle, but Harris and third-stringer Chris Katrenick will be challenged in the meantime as Duke’s schedule gets more difficult.

The Blue Devils entered the weekend just outside the Top 25, but they would welcome a spot in the rankings. “Absolutely,” said tight end Davis Koppenhaver, who had two catches, both for touchdowns. “Just being recognized would be awesome.”

Duke’s Jack Driggers recovered his own onside kick after Duke scored a touchdown on the game’s first possession, helping the Blue Devils take a 13-0 lead before the Eagles ran an offensive play. N.C. Central had just four players on the front line of its kickoff return team and none in the middle of the field, which Cutcliffe noticed in his pregame preparation. “It was just an alignment issue, and so I was going to do it,” he said.

NOT PERFECT THIS TIME

A week after beating Baylor without turning over the ball, committing a penalty or allowing a sack, Duke made its share of mistakes. The Eagles capitalized for their first two touchdowns. Totten scored after a Duke penalty turned an N.C. Central punt into a first down, and Jordan McRae returned a fumbled snap by Harris 55 yards for a touchdown.