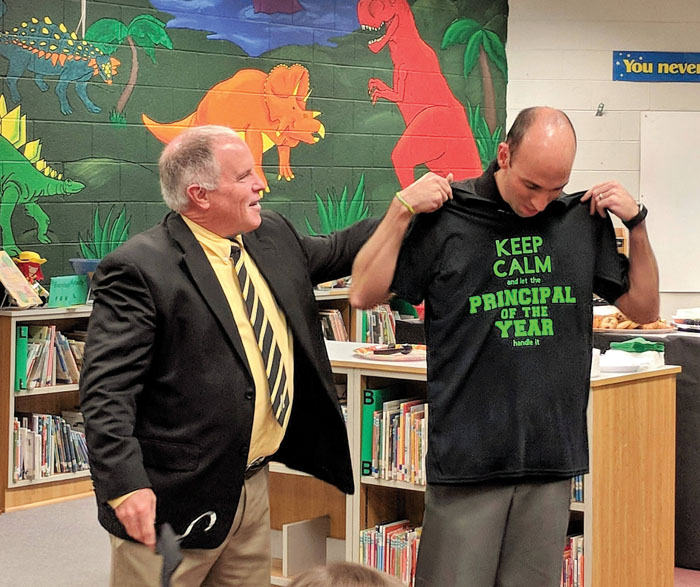 During his time as principal, Irving has led Woodrow Wilson Elementary to higher academic performance and has increased the academic growth of students each year. In the latest test scores released this month, Woodrow Wilson showed strong gains in academic achievement in all grade levels and in all subjects. The school also has met the state’s expectations for academic growth each year that Irving has been principal.

“Mr. Irving has done an amazing job of leading Woodrow Wilson. He sets high expectations for students and staff, but he sets even higher expectations for himself. He’s extremely encouraging, and he’s developed a wonderful culture of support and achievement at the school. Everyone at Woodrow Wilson believes in success, and it starts with Mr. Irving. He’s a fantastic principal and a great representative of Kannapolis City Schools,” Buckwell said.

Irving has been principal of Woodrow Wilson since 2015. During that time, he has created a culture that focuses on the well-being of the whole child. The school incorporates physical activity into the school day and emphasizes academics as well as healthy habits for students. Woodrow Wilson also has started a Real School Gardens program that includes an outdoor classroom.

Assistant Principal Kim Keesee says the changes are part of Irving’s belief in focusing on the whole child to build lifelong success.

“His energy is infectious,” she said. “He wants to build lifelong learning skills in students that they can take with them after they leave Woodrow Wilson. He also wants to bring sights, sounds and senses to the learning experience and make school fun for students and staff. He has definitely done that. He’s an amazing principal.”

Irving said he was surprised to receive the Principal of the Year honor.

“I’m very flattered,” he said. “I just kind of come to school and do my thing every day and have a good time with it. So, yeah, I’m shocked.”

According to Irving, the best things about being a principal involve other people.

“As a principal, you can share leadership with people. You can do great things for kids, for families, and for staff members,” he said. “And, really, one of the best things I like about it is you can set the tone and really make a fun and enjoyable work experience for everybody and a great school experience for kids. It’s a fun ride.”

He graduated from the State University of New York at Potsdam with a degree in elementary education and speech communication. He earned his master’s degree in school administration from UNC Charlotte. He will now represent Kannapolis City Schools in the regional competition for North Carolina Principal of the Year.