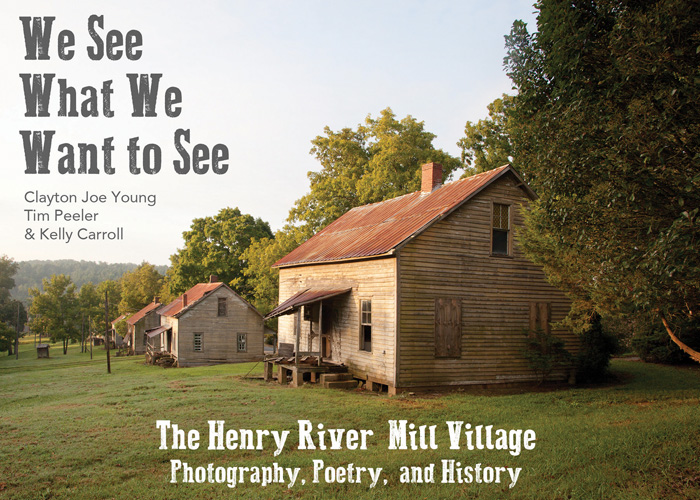 Authors Tim Peeler and Clayton Joe Young will discuss their book, 'We See What We Want to See: The Henry River Mill Village,' at Rowan Public Library's South Rowan Regional Branch on Monday at 7 p.m.

SALISBURY – Rowan Public Library’s South Rowan Regional branch kicks off its North Carolina History series on Monday, Sept. 24, with a program about the Henry River Mill Village. The program, led by Tim Peeler and Clayton Joe Young, will begin at 7 p.m.; the meeting room doors will open at 6:30 p.m. This program is open to the public, and all ages are welcome. The library is located at 920 Kimball Road in China Grove.

Peeler, a former employee of the Salisbury Post, and Young are co-authors (along with Kelly Carroll) of “We See What We Want to See: The Henry River Mill Village, Photography, Poetry, and History.” Recently published by RedHawk Publications, the book grew out of the authors’ appreciation for the Village, which Peeler describes as “a place for nostalgia and beauty.”

The Henry River Mill Village, located in Burke County, was abandoned in 1987, though it gained new attention as the setting for District 12 in the 2012 film “The Hunger Games.” Then-owner Wade Sheppard began allowing the public to visit the Village. Young, a photographer, was working on a project about textile mills and visited during a reunion and photographed many of the previous tenants.

At the event, he ran into Peeler, who is a writer. The friends and Catawba Valley Community College colleagues began discussing a possible collaboration, and “We See What We Want to See” was the result.

“Clayton and I had talked about doing something together for a while,” Peeler said. “And after he showed me some of the photos he had taken in the mill village, I began writing poems to correspond with or react to the images. I had read Kelly’s master’s thesis a couple years prior to this, and when we began the project with RedHawk and Robert Canipe (RedHawk editor-in-chief and a CVCC colleague), we decided to contact her because we thought the three pieces fit together to tell the story.”

While the Village’s new fame as District 12’s setting brought a lot of positive attention to the property, Canipe described the association to the Hunger Games series as both “fortunate and unfortunate. The film led to a faster progression of vandalism of the property. However, it’s (also) another reason to save it.” Peeler also sees the opportunity in the property’s pop-culture fame: “It helps draw the audience to the village, and helps provide an opportunity for preservation.”

The importance of the Henry River Mill Village in N.C. history is something that they all recognize. “At one time, a lot of N.C. residents lived in a village similar to this,” Young explained. “Visitors will see one of the only examples of a preserved textile mill village. Most of these houses have never been updated.”

“There is a past in (the Village) that is quickly slipping away,” Peeler pointed out. “It is important to know where we came from and what other generations did to provide us with convenient lives.”

Canipe describes the Village as a representation of the “important movement between agrarian and industrial culture. Its pastoral houses and simple living represents that which the mill workers were used to: the farm. (The workers) might toil 16 hours a day in the mill, but they were coming home to that which they recognized, and it brought them comfort. They ‘see what they want to see.’”

The authors hope that “We See What We Want to See” communicates the Village’s significance to a broad audience. “I hope that the book we created will create interest in a number of different readers,” said Young. “We explore the location in both an artistic and documentary sense.” Peeler described their efforts as “an artistic preservation. We were more than anything else trying to create art from the entropy that we encountered.”

The new owners of the property share this desire for rejuvenation. In late 2017, Calvin Reyes and his mother and stepfather, Elaine and Michael Namour, purchased the Henry River Mill Village, and their efforts have sparked a new wave of community engagement. Reyes, a lead training specialist for the consulting firm Winning Matters, is also the executive director of the non-profit Henry River Preservation Fund.

“The community really contributes to Henry River,” said Young. “Ever since Calvin has become involved, there are always volunteers helping to clean the village up or helping with fundraisers.”

Current plans for the Henry River Mill project include “restoring 20 mill houses and the company store,” said Reyes. There are “also plans to add back 13 structures (12 of the original houses and one original boarding house) that were previously lost.” Reyes describes the project’s larger vision as restoring “the village into a bed & breakfast and resort style setup to allow locals and visitors to enjoy all western N.C. has to offer, including history, recreation on land and rivers, food and culture, and our sense of community in the area.”

Reyes’ energy and vision is appreciated. According to Canipe, “Reyes represents a shining example of the investor whose long-term sight sees a project as a good thing for everyone, not just himself. It’s a stellar way of thinking that I hope will grow and spread.”

Peeler and Young will be joined by Canipe and Reyes at Monday’s presentation, and they have an engaging discussion panel planned. Peeler sees the presentation as an opportunity for discovery. “I want the audience to know that (the Village) is there, that a new owner wants to preserve an important part of our shared past, and that they would likely enjoy a visit to the property,” he said. “The takeaway is that a historical venue can mean different things to different audiences.”

For Peeler and Young, the Village continues to inspire, and their next collaborative project reverses their original process. “I wrote a story arc of poems, and (Young) went out and shot images to coincide with the story,” Peeler said. They expect to publish the book later this year.

Copies of “We See What We Want to See” will be sold at Monday’s program; cash or credit accepted. To learn more about the Village, visit HenryRiverMillVillage.com.

The Sept. 24 program is the first in a three-part N.C. History series that the South Rowan branch is hosting. On Oct. 8, Rowan Museum Executive Director Aaron Kepley will give a talk on agriculture in Rowan County in the late 1800s through early 1900s and the central role of the China Grove Roller Mill in its community.

On Nov. 26, Richard Eller, CVCC history professor and co-editor of “Polio, Pitchforks, and Perseverance,” will examine the effect of the polio epidemic on post-WWII Catawba County. For more information about South’s programs, visit rowanpubliclibrary.org or call 704-216-7727.