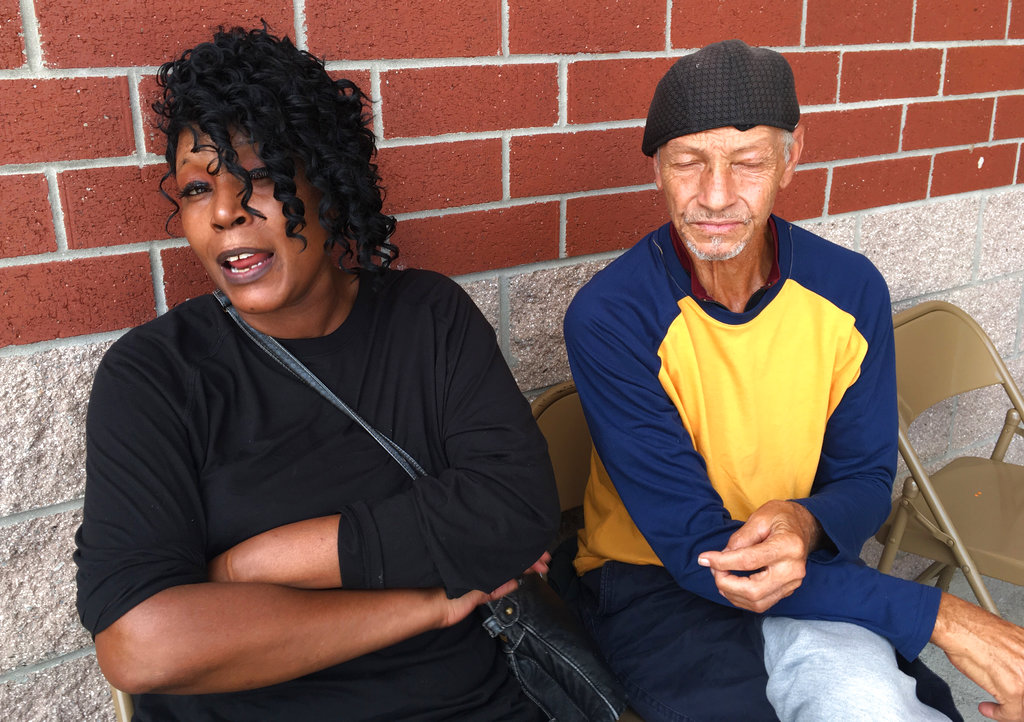 Benetta White and David Lloyd sit after escaping their flooded yard to escape Hurricane Florence's latest life-threatening punch in Bladenboro on Friday. This was their second evacuation in a week. They were among 100 people rescued with helicopters, boats and high-wheeled military vehicles during a six-hour rescue operation in southeastern North Carolina's Bladen County that lasted into Friday morning. (AP Photo/Alan Suderman)

BLADENBORO — Benetta White and David Lloyd slogged through waist-deep water filling their yard to escape Hurricane Florence’s latest life-threatening punch to a town in the Carolinas.

It was their second evacuation in a week. They were among 100 people rescued with helicopters, boats and high-wheeled military vehicles during a six-hour rescue operation in southeastern North Carolina’s Bladen County that lasted into Friday morning.

Officials in North and South Carolina warn that the flooding danger is far from over, with South Carolina also ordering more evacuations as rivers rise. At least 43 people have died since the hurricane slammed into the coast more than a week ago.

White and Lloyd, who live in the North Carolina town of Kelly, were given little time Thursday night to evacuate when the Cape Fear River came rushing onto their property. By the time they loaded their van, the water was waist-high and they had to slog through a foul-smelling soup to get to a neighbor’s pickup.

From there they went to the town’s fire department, and were taken out of town by an Army truck. Now they are staying in a shelter at a Bladen County high school. It’s the second time they’ve evacuated in a week.

“We had to evacuate again, all over again, and got trapped in a bunch of water in a car and almost lost our lives,” she said.

The National Guard and U.S. Coast Guard rushed in to help, with aircraft pilots wearing night-vision goggles. The mandatory evacuation issued Thursday for Kelly, population about 800, was the third for the town since the storm began lashing the state more than a week ago.

A CH-47 Chinook from the Minnesota National Guard’s 211th Aviation Regiment was wrapping up a 12-hour shift Thursday evening when they began hearing about stranded residents. It soon became clear that they were needed.

“So at that point it was game on,” said Chief Warrant Officer 3 Tom Knutson of St. Cloud, Minnesota, in an interview Friday.

Knutson said his helicopter made a landing at a church about 9:45 p.m. where there was barely enough room to put down the aircraft.

“We understand that a lot of them are losing their houses,” said Sgt. Derek Vollmer of St. Cloud, another crew member, adding those rescued “seemed very thankful.”

Around the state since the storm hit last week, first responders have performed about 5,000 rescues so far, Gov. Roy Cooper said. “We are eternally grateful to our first responders, who continue to show unflinching courage in the face of danger,” Cooper said.

He warned flooding would continue into next week, meaning “that lives are still at risk.”

Cooper’s sentiments were echoed by South Carolina Gov. Henry McMaster, who said Friday: “Although the winds are gone and the rain is not falling, the water is still there and the worst is still to come.”

The South Carolina governor estimated damage from the flood in his state at $1.2 billion. In a letter he said the flooding will be the worst disaster in the state’s modern history. McMaster asked congressional leaders to hurry federal aid.

Speaking in Las Vegas, President Donald Trump said South Carolina is in for a “tough one” as floodwaters continue to rise.

“They got hit, but the big hit comes days later and it will be the biggest they’ve ever had,” said Trump, who visited North and South Carolina this week.

Environmental concerns were also continuing to mount. Duke Energy said a dam containing a large lake at Wilmington power plant had been breached by floodwaters from Florence, and it was possible that coal ash from an adjacent dump was flowing into the Cape Fear River.

Kevin Tovornik was scrambling to prepare for flooding in Conway, South Carolina. He loaded all of his furniture into a borrowed flatbed hay trailer and took it to a warehouse where space was being donated to possible flood victims. Tovornik’s neighborhood already flooded early Monday because of Florence’s heavy rain. He lost his wife’s car.

Tovornik wanted to go back to his house on Friday for more preparations, but with bridges starting closing all around Conway because of floodwaters, the few open roads were jammed. He had gone half a mile (800 meters) in an hour. He heard friends stuck in traffic Thursday night for four hours.
“This is ridiculous. This is the worst I’ve ever seen, and that includes hurricane evacuations,” Tovornik said.