Not real news: A look at what didn’t happen last week 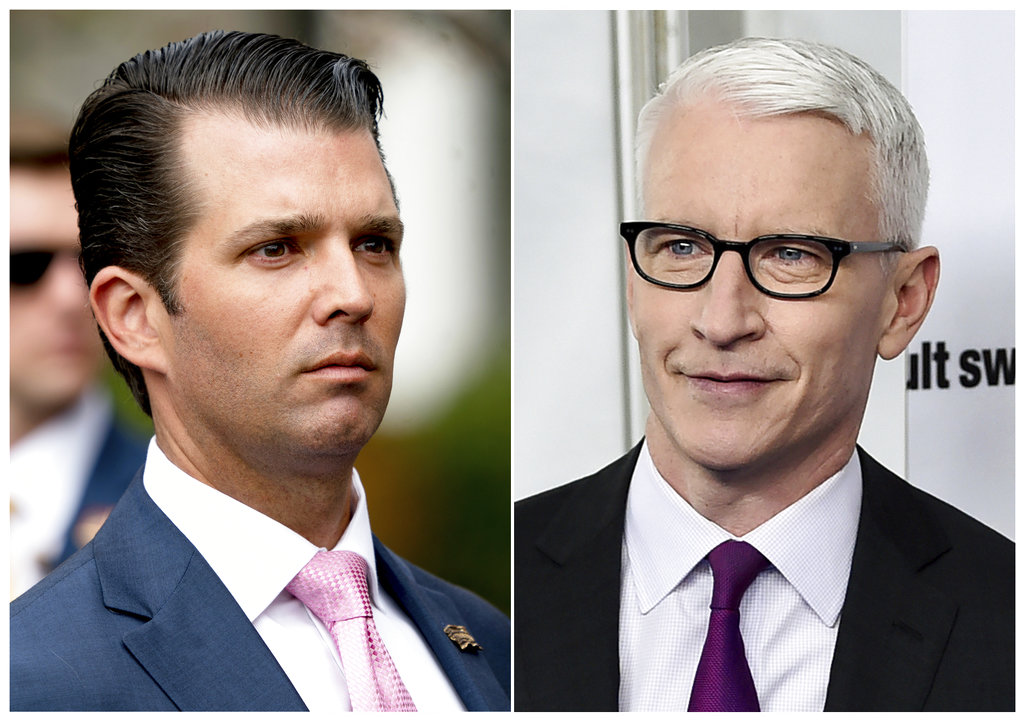 This combination photo shows Donald Trump Jr., the son of President Donald Trump at the annual White House Easter Egg Roll at the White House in Washington on April 2, 2018, left, and CNN news anchor Anderson Cooper at the Turner Networks 2018 Upfront in New York on May 16, 2018. (AP Photo)

A roundup of some of the most popular but completely untrue headlines of the week. None of these stories is legit, even though they were shared widely on social media. The Associated Press checked these out. Here are the real facts:

THE FACTS: Several online sites this week shared photos of CNN anchor Anderson Cooper broadcasting while standing in waist-high water, falsely claiming the images proved he faked the wrath of Hurricane Florence on air. The claims were made after Donald Trump Jr. tweeted the photo of Cooper, which also showed his camera crew standing a few feet away in water only above their ankles. Trump did not specifically mention Hurricane Florence in his social media post.

The photo in question was taken a decade ago when Cooper was broadcasting out of Texas during Hurricane Ike, not during Florence, which hit North and South Carolina this month.

During a Monday night broadcast, Cooper addressed several of the claims circulating on the internet and Donald Trump Jr.’s tweet.

“I’ve covered hurricanes for about 14 years and it really does make me sad to think that anyone would believe that I would try to fake something or overly dramatize a disaster,” Cooper said.

NOT REAL: Pilot amazingly saves his passengers’ lives during a typhoon

THE FACTS: Video footage of a plane diving through the sky, doing a 360-degree roll before righting itself, is not the work of a talented pilot saving his plane from typhoon winds in China, as some online sites are suggesting.

The clip, which purports to be Aeroplane Dragon Air B-737 hit by a typhoon in Shenzhen, China, is actually half computer-generated video of a plane spinning through the air with footage from an emergency landing of a Capital Airlines flight at a Shenzhen City airport in August. The second half of the video matches video frames taken of passengers deplaning from the Capital Airlines flight after the emergency landing.

Aristomenis Tsirbas, director at Menithings Productions, told The Associated Press that he created the first portion of the video using CGI. “Yes, the part of the video that shows an airliner spinning 360 degrees is stolen copyrighted work — specifically my work.”

THE FACTS: A North Carolina gas station clerk did not refuse service to a customer because of a Trump bumper sticker during Hurricane Florence. The story originating from America’s Last Line of Defense, a site that labels itself as satire, claimed Marathon gas station clerk Marvin Jones, “wanted to play God” during the hurricane and decided to turn down Earl Hammerschmidt. The report went on to say police called to the scene said that the clerk was allowed to deny him service.

The false story circulated widely on the internet as Hurricane Florence made landfall last week. America’s Last Line of Defense confirmed that the story originated on their site.

This is part of The Associated Press’ ongoing effort to fact-check misinformation that is shared widely online, including work with Facebook to identify and reduce the circulation of false stories on the platform.