Not ‘just’ a Cat 1: Florence shows flaws in hurricane scale 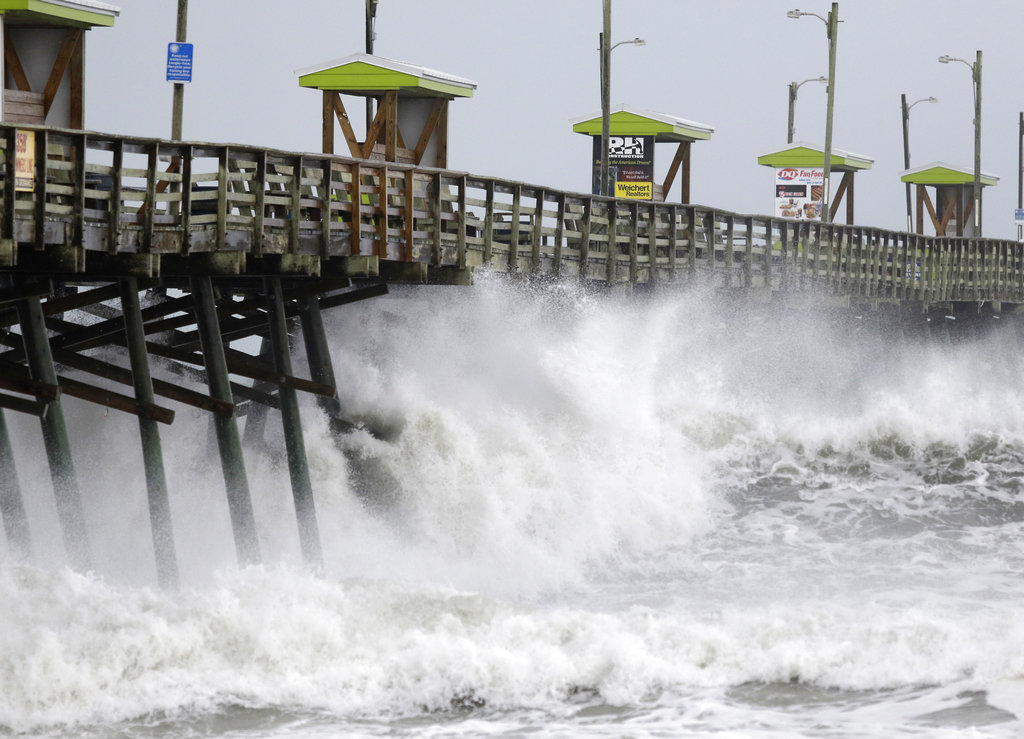 By Joel Achenbach and Emily Wax-Thibodeaux

Rolling across the Atlantic Ocean early last week, bearing down on the Carolinas, Hurricane Florence grew into a Category 4 storm, nearly a 5 — and that got everyone’s attention. People know that a Cat 5 is as big and bad as a storm can get.

In Craven County, North Carolina, authorities changed their voluntary evacuation order to “mandatory” for all 105,000 residents.

Then Florence ran into some shearing winds, and downshifted to a Cat 3 – and then a Cat 2.

That got everyone’s attention, too. In Craven County, thousands of residents decided to stay put. Many regretted that decision when the storm shoved water up the Neuse River and over its banks, flooding historic New Bern. Roughly 1,300 people had to be rescued, some from the roofs of their homes or cars.

“A lot of people did stay because the storm went down from a Category 4 to a Category 2, and they think of that number as being the end-all,” county Public Information Officer Amber Parker said.

Florence was just a Category 1 storm when it made landfall on the beaches of North Carolina. But no one in the Carolinas today thinks of Florence as a small hurricane — as “just a 1.”

The hurricane categories are determined by the Saffir-Simpson Hurricane Wind Scale, which has been used by the National Hurricane Center for decades. There’s now robust debate about whether the scale is overused or needs to be replaced.

The scale’s greatest virtue is that it’s easy to understand.

“It’s simple in a stressful world,” said Chia-Ying Lee, a research scientist at Columbia University who studies hurricane risk. But a more comprehensive threat rating for Florence might have made it a Category 4 or 5, Lee said.

The central problem with the SS scale is that — as its full name clearly states — it measures only wind. It doesn’t capture such threats as coastal storm surge and heavy rainfall or say anything about the size of a hurricane.

“It’s almost as if they need to come up with a new code system. Category 1 hurricane and category ‘something’ for the rainfall,” said Corine Cutler Corr, a resident of New Bern, North Carolina, who chose not to evacuate. She and her husband, a contractor, live on relatively high ground and thought they could help their neighbors who were riding it out.

The National Weather Service labored in advance of Florence to warn residents about the likelihood of record rainfall, catastrophic flooding and a potentially lethal storm surge, said Bill Lapenta, director of the National Centers for Environmental Prediction. But Florence will spur discussion in the scientific community about how to describe hurricane threats in the future, he predicted.

“We’re just becoming more sensitive to the need to communicate clearly,” he said.

Wind will always dominate the early public impression of a hurricane, because when storms are at sea, their wind field is their primary feature, noted Gina Eosco, who works for Cherokee Nation Strategic Programs and specializes in weather risk communication. First impressions linger, she said.

“If you think of a hurricane as a chapter book, the first few chapters, the main character may be wind. But as the story evolves and we have a better idea where it’s going, the story changes, and new characters come into play,” she said. “The issue is, some people still focus on the first chapter.”

Taylor Fontenot, a captain of an-all volunteer group known as America’s Cajun Navy that raced to help people affected by Florence, said it’s “real, real dangerous when the weather people start downgrading storms. Then folks feel they are OK to ride it out. That’s when we get the life-or-death scenarios.”

Another unhelpful phenomenon is the suspicion that experts and the news media are hyping a storm.

“Alarmist media at it again. Overhyped Florence. Down two notches to Cat 2 already. Soon be Cat 1. They are still trying to hype it,” a Pennsylvania state legislator, Rick Saccone, declared on Twitter.

No one has produced a widely accepted metric to replace Saffir-Simpson. Fashioning such a thing may be impossible — even unwise.

“I am not a fan of the Saffir-Simpson scale or indeed any attempt to characterize a hurricane by a single number,” Massachusetts Institute of Technology atmospheric science professor Kerry Emanuel said by email. “In my view, there is no substitute for a carefully worded, succinct statement of the threat that any particular storm poses.”

A storm’s rating on the Saffir-Simpson scale often underestimates a storm’s destructive power. A classic example is Sandy, which barely had hurricane-force winds when it struck New Jersey and New York in October 2012 and caused scores of deaths and tens of billions of dollars in damage. A year earlier, Hurricane Irene had dwindled to a tropical storm when it arrived in the same region and generated record floods.

A very large storm with relatively low wind speed can produce a monster storm surge. That was the case with Hurricane Ike in 2008, which blew in from the Gulf of Mexico as a Category 2 with 110 mph winds — just 1 mph shy of Category 3 when it made landfall in Galveston, Texas. Ike’s lethal storm surge destroyed water gauges in Galveston, but researches estimated that water levels during high tide spiked 20 feet.

Rain is notoriously the most underappreciated hurricane threat. Last year, Hurricane Harvey was a Category 4 storm at landfall near Corpus Christi, Texas, but the wind damage turned out to be a rounding error after Harvey stalled along the coast, dropped up to 60 inches of rain and triggered historic flooding in Houston. That brought back memories of the flooding in June 2001 from a similarly sluggish tempest that didn’t even rate as a Cat 1 — Tropical Storm Allison.

Perhaps the most important determinant of a hurricane’s destructive potential is the vulnerability of the places and people in its path. Much of the population of New Orleans lived below sea level when Hurricane Katrina struck in 2005.

Houston had a massive population living in areas prone to flooding. And Puerto Rico had economic and infrastructure challenges when Hurricane Maria slammed the island territory last September.

In the case of Maria, the Category 4 designation accurately captured the immediate destructive power of the storm. But the ensuing humanitarian disaster — officially blamed for 2,975 excess deaths over a six-month period — was off the charts.

“I don’t think the Saffir-Simpson scale is useful. In fact, I think it can be misleading in representing the storm hazard. Perhaps it should be abandoned,” said Isaac Ginis, a University of Rhode Island oceanography professor.

Ginis has used a grant from the Department of Homeland Security to develop a computer tool that creates 3-D images of potential hurricane damage. For example, a Cat 3 hurricane dropping 20 inches of rain would have catastrophic consequences for Providence, Rhode Island, if the hurricane barriers in the bay were raised to block the storm surge, he said. Downtown Providence would essentially become a lake fed by two rivers, he said.

Among those not ready to jettison Saffir-Simpson is Brian McNoldy, a senior research associate at the University of Miami’s Rosenstiel School of Marine and Atmospheric Science and the author of a popular hurricane blog.

“I don’t see an obvious replacement,” he said.

For starters, any scale that describes threats to land would not work to describe a hurricane in the open ocean — where, for example, there is no storm surge and where rainfall is irrelevant. The ocean can’t flood.

One possible supplement to the Saffir-Simpson scale would be one based on integrated kinetic energy. It’s a measure of the destructive power of winds across the breadth of the tropical cyclone. A storm like Florence would have a high IKE rating because it was a big storm — one that expanded as it neared land — with powerful winds extending 200 miles from the eye.

But the IKE would say nothing about peak wind speeds. Residents of south Florida who endured Hurricane Andrew in 1992 can attest that a Cat 5 storm is a different animal than a Cat 1. Andrew, a compact hurricane, had winds that, according to a 2004 analysis, peaked at 167 miles per hour.

A wind scale plus an overall-energy scale would still say nothing about rainfall. And with Florence, the rain was the story.

“This would have been a 5 on the rainfall scale,” McNoldy said.

The Washington Post’s Jason Samenow and Angela Fritz contributed to this report.