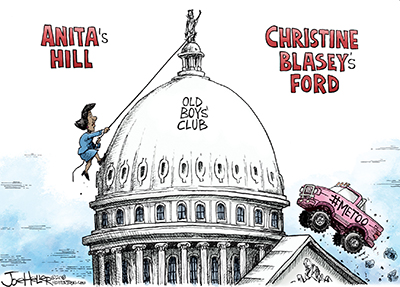 No matter where you stand on Christine Blasey Ford’s accusation of sexual assault against Judge Brett Kavanaugh, it’s hard not to notice the inequality in how the two have been addressed.

President Donald Trump has routinely referred to “Judge Kavanaugh.” For instance, the president said earlier this week: “Judge Kavanaugh is one of the finest people that I’ve ever known,” which is the appropriate and respectful manner in which to address him. (When you’ve earned an honorific, people should use it. The rule applies equally to Trump, who is properly addressed as “Mr. President,” even if you’re a Democrat.)

As for Ford, well, the president has not said her name out loud, referring to the psychologist and Palo Alto University professor earlier this week as “that woman.” Only on Friday did he call her “Dr. Ford,” in a tweet that questioned her credibility.

The media hasn’t been immune to diminishing Ford’s status; witness the absence of her name in many headlines. A CNN headline this week read, “Lawyer: Kavanaugh Accuser Willing to Testify.” On Friday, Fox News posted this headline on its site: “Trump goes on offensive in Kavanaugh fight, calls on Kavanaugh accuser to provide a police report.” Even The Post is guilty of this, publishing a headline on its site Friday that read, “Trump questions credibility of Kavanaugh accuser, lashes out at Democrats.” As an editor, I know it can be easy not to use someone’s name in a headline for fear that they are not well-known enough, but who following this story doesn’t know Ford’s name by now?

What’s in a name? An awful lot, it turns out. Sarah McBride – a transgender activist who has been frequently “dead named,” or called out maliciously by her birth name – views such acts as “disrespectful and marginalizing”: Your name is “your personhood. It’s the way we make clear that we see and respect someone every single day. . . . A name is one of the first things that’s given to a person when they’re born in a figurative performance of granting that person their individuality and humanity.”

Anita Hill, who accused Justice Clarence Thomas of sexual harassment during his Supreme Court confirmation hearings in 1991, urged in the New York Times this week that the Senate committee “refer to Christine Blasey Ford by her name.” She is “not simply ‘Judge Kavanaugh’s accuser’ . . . she is a human being with a life of her own.” And a name of her own.

Of all the ways to diminish her, it’s Trump’s use of “that woman” that reeks of sexism and misogyny. Perhaps the phrase sounds familiar? It should. It was President Bill Clinton who famously shamed and diminished Monica Lewinsky, the then- 24-year-old former White House intern, by claiming, “I did not have sexual relations with that woman, Miss Lewinsky.”

In her riveting 2015 TED Talk, Lewinsky pointed specifically to the phrase “that woman” as part of her public shaming by Clinton. “I was branded as a tramp, tart, slut, whore, bimbo and, of course, that woman . . . it was easy to forget that that woman was dimensional, had a soul and was once unbroken.”

Does Lewinsky protest too much? I don’t think so, especially after listening to McBride, who clearly has thought a good deal about the meaning of names: “When I’m not called the correct name and pronoun, it says to me that the person doesn’t see me.”

Whether you support Christine Blasey Ford or not, please call her by her name. Just as we treat Kavanaugh with respect when referring to him, we should afford Ford the same respect. She, like Kavanaugh, needs to be seen to be fairly heard.

Petrow is a contributing writer for The Washington Post and author of “Steven Petrow’s Complete Gay & Lesbian Manners.”