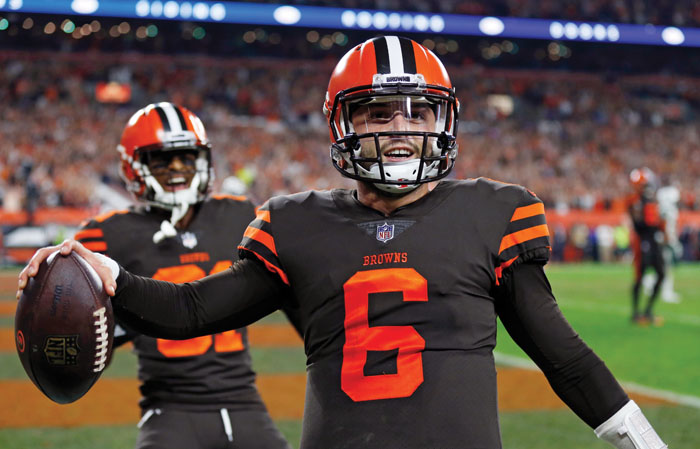 Cleveland Browns quarterback Baker Mayfield celebrates after scoring a 2-point conversion during the second half of an NFL football game against the New York Jets, Thursday, Sept. 20, 2018, in Cleveland. (AP Photo/Ron Schwane)

By TOM WITHERS, AP Sports Writer
CLEVELAND (AP) — For the first time in 635 days, the Cleveland Browns found a way to win.
Baker Mayfield showed them how.
The No. 1 overall pick replaced injured starter Tyrod Taylor and sparked the Browns, who got two 1-yard touchdown runs from Carlos Hyde and beat the New York Jets 21-17 on Thursday night for their first win since Dec. 24, 2016.
And so ends Cleveland’s 19-game winless streak, the NFL’s second-longest since the 1970 AFL-NFL merger.
The Browns (1-1-1) trailed 14-0 in the first half before Mayfield came in for Taylor and led four scoring drives while winning an unexpected matchup against Jets rookie quarterback Sam Darnold. Cleveland passed on taking Darnold in the draft and instead chose Mayfield, the Heisman Trophy winner from Oklahoma.
Mayfield finished 17 of 23 for 201 yards in a little more than a half after coming in after Taylor suffered a concussion.
Darnold had one last chance, but was intercepted by Terrence Mitchell with 11 seconds left.
When the final seconds ticked off the clock, Cleveland fans, who had endured a 0-16 season and waited nearly two years to see their Browns win, erupted in celebration.
Refrigerators around the city stocked with Bud Lights were finally unlocked, and there figured to be more than a few beverages consumed in the hours ahead.
This was just one win, and while it was an ending, it also felt like a beginning — because of Mayfield.
Isaiah Crowell had two touchdown runs for the Jets (1-2), who seemed in control when they took a 14-0 lead and knocked Taylor from the game.
Newly signed Browns kicker Greg Joseph made field goals of 45 and 27 yards after being signed just three days ago.
Browns coach Hue Jackson got just his second win in 35 games since being hired by owners Dee and Jimmy Haslam, and this win will ease some of the pressure he’s been feeling to get Cleveland turned around. Jackson could also be faced with a difficult choice — either stick with Mayfield or go back to Taylor when he’s healthy.
The decision might not be as tough now.
Mayfield made his NFL debut with 1:42 left in the second quarter, replacing an injured Taylor after Cleveland’s starter was sacked for the third time. Taylor struggled getting to his feet after being dragged down by linebacker Avery Williamson, but he had absorbed several hard blows before that — and had been ineffective.
With Cleveland’s crowd roaring, Mayfield completed a 14-yard pass to Jarvis Landry on his first pass as a pro and then found tight end David Njoku for 17 yards. Mayfield drove Cleveland into field-goal position and Joseph, who signed with the team on Monday following a tryout, drilled a low line drive to pull the Browns within 14-3.
Cleveland’s plan was to have Mayfield watch and learn this season.
Taylor’s injury may change everything.
For Darnold, a promising start ended with his second loss in three games. He completed 15 of 31 passes for 169 yards, but threw two picks late in the fourth as he tried to rally the Jets.
Hyde’s 1-yard TD run pulled the Browns within 14-12 and Cleveland tied it with a trick 2-point play.
Mayfield shifted to the left and the ball was snapped directly to running back Duke Johnson, who ran right and gave the ball to Landry on a reverse. Landry then lofted a pass into the end zone to Mayfield, whose conversion tied it and sent Cleveland fans into a frenzy.
Crowell scored his second TD with 7:54 left in the second quarter, and was flagged for excessive celebrating when he squatted and wiped the ball on his backside before flinging it into the crowd.
Crowell’s untouched 7-yard run TD run came five plays after Jets linebacker Kevin Pierre-Louis got a hand on Britton Colquitt’s attempted punt and New York took over at Cleveland’s 28.
On the first play of the second quarter, Crowell took an inside handoff and raced into the end zone before firing the ball into the stands in celebration. Crowell spent four seasons with the Browns before signing a three-year, $12 million free agent contract with New York as a free agent in March.
LONG AUDITION
Joseph stayed on the field and kicked by himself during the opening coin toss, and each of his makes drew a rousing ovation from Cleveland fans. Just a few days ago, Joseph was relaxing in South Florida with friends while Gonzalez missed four kicks in New Orleans and then got booted by the Browns.
RADIO SILENCE
The Browns suspended radio reporter Nathan Zegura eight games for his conduct on the sideline during last Sunday’s loss at New Orleans. Zegura, who also co-hosts the team’s in-house radio broadcast, can’t work a game until Nov. 25. He has also been removed from the team’s afternoon show for two weeks.
INJURIES
Jets: CB Trumaine Johnson left in the first quarter with a suspected head injury, but returned. …. WR Charone Peake sustained a hamstring injury. … CB Buster Skrine injured his knee in the first and did not return. … WR Robby Anderson injured his nose in the third quarter, but came back.
Browns: S Jabrill Peppers hurt a shoulder in the first half, and Landry replaced him on punt returns.
UP NEXT
Jets: Play at Jacksonville on Sept. 30.
Browns: Visit the Oakland Raiders on Sept. 30.
___
More AP NFL: https://apnews.com/tag/NFL and https://twitter.com/AP_NFL