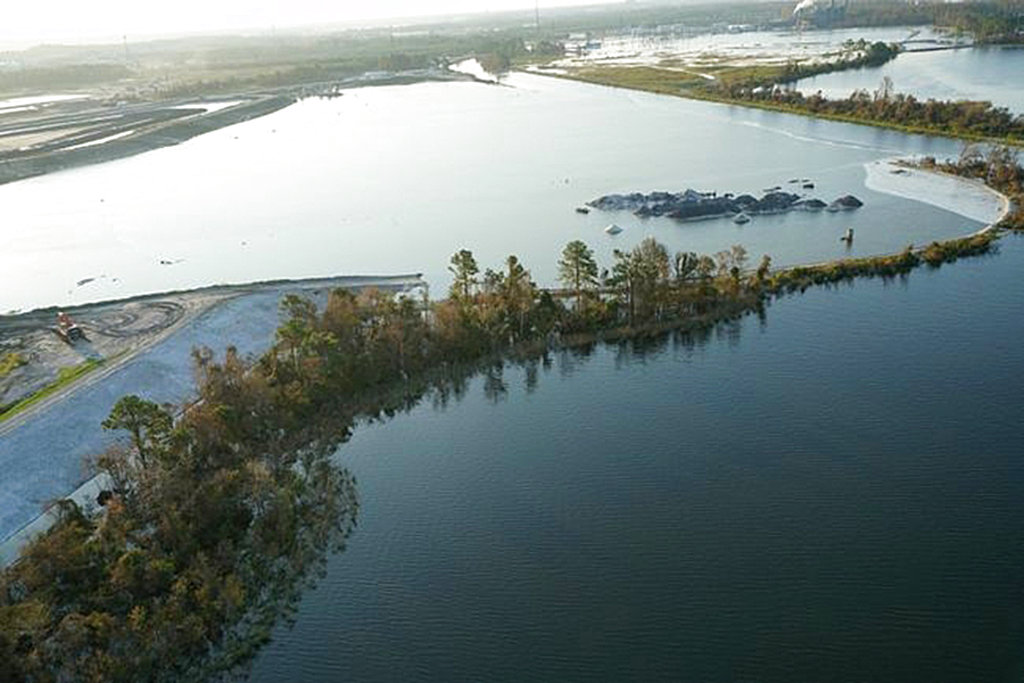 In this photo released by Duke Energy, The Sutton 1971 coal ash basin is seen Friday near Wilmington. Duke spokeswoman Paige Sheehan said Friday that floodwaters continue to overtop an earthen dike at the north side of Sutton Lake, a 1,100-acre (445-hectare) reservoir at the L.V. Sutton Power Station. (Duke Energy via AP)

By Meg Kinnard and Jeffrey Collins

GALIVANTS FERRY, S.C. — With muddy river water still washing over entire communities on Friday, eight days after Hurricane Florence slammed into land with nearly 3 feet of rain, new evacuation orders forced residents to flee to higher ground amid a sprawling disaster that’s beginning to feel like it will never end.

At least 42 people have died, included an elderly man whose body was found in a submerged pickup truck in South Carolina, and hundreds were forced from their homes as rivers kept swelling higher.
Leaders in the Carolinas warned residents not to get complacent, warning additional horrors lie ahead before things get much better.

“Although the winds are gone and the rain is not falling, the water is still there and the worst is still to come,” said South Carolina Gov. Henry McMaster.

Speaking in Las Vegas, President Donald Trump said South Carolina is in for a “tough one” as flood waters keep rising.

“They got hit, but the big hit comes days later and it will be the biggest they’ve ever had,” said Trump, who visited North and South Carolina this week.

While most peoples’ lights are back on in the Carolinas and Virginia and trucks are picking up mountains of storm debris, water draining toward the sea from inland areas is sending rivers over their banks across a wide region.

In South Carolina, emergency managers ordered about 500 people to flee homes along the Lynches River. The National Weather Service said the river could reach record flood levels late Saturday or early Sunday.
In tiny Galivants Ferry, Audra Mauer said she lost her home two years ago when Hurricane Matthew hit and she’s losing it again to Florence. No area improvements were made after Matthew, she said, and a frustrated Mauer has no faith any will happen now.

“They didn’t clean the ditches,” she said. “Same levee. Same dams. What have we been doing for two years?”

About 25 miles (40 kilometers) nearer to the South Carolina coast, Kevin Tovornik tore out carpet and removed furniture as a preventative measure because he expected flooding at the house he has owned for 20 years in Conway, where the Waccamaw River was still rising. Bridges are starting to close because of flooding, he said, and friends were struck in traffic for hours trying to cross the town of 23,000.

“This is ridiculous. This is the worst I’ve ever seen,” Tovornik said.

Road travel also was a daunting problem in Wilmington, a city of 120,000 people still mostly cut off from the rest of North Carolina. A photograph posted by the state transportation agency showed flowing water and buckled highway asphalt on one of the few passable routes into the city, where officials have distributed food and water to residents.

With the Great Pee Dee River receding, state officials said Interstate 95 in South Carolina would reopen after a safety check, but travelers couldn’t get very far since the highway was still closed in North Carolina because of the flooded Lumber River.

Along the Cape Fear River, David and Benetta White and their four children were given short notice to evacuate overnight as floodwaters swept over their property. By the time they got loaded into their van, water was waist-high and they had to slog through a foul-smelling soup to get to a neighbor’s pickup.

“We almost lost our lives, I’m here to tell you we did,” said White, whose family previously evacuated last Thursday as Florence, then a hurricane, approached from the Atlantic.

The South Carolina governor estimated damage from the flood in his state at $1.2 billion. In a letter, he said, the flooding will be the worst disaster in the state’s modern history. McMaster asked congressional leaders to hurry federal aid.

North Carolina Gov. Roy Cooper said the damage in his state is in the billions of dollars, but there was no way to make a more accurate estimate while flooding continues.

As environmental worries mount, Duke Energy said a dam containing a large lake at Wilmington power plant had been breached by floodwaters, and it was possible that coal ash from an adjacent dump was flowing into the Cape Fear River.

Paige Sheehan, a Duke Energy spokeswoman, said the company didn’t believe the breach at the L.V. Sutton Power Station posed a significant threat for increased flooding to nearby communities because the river is already running high.

Something else could be a problem, though. The National Hurricane Center said it was monitoring four areas in the Atlantic for signs of a new tropical weather threat. One was off the coast of the Carolinas with a chance of drifting toward land.
___
Collins reported from Columbia, South Carolina. Associated Press writers Martha Waggoner and Gary D. Robertson in Raleigh; Alan Suderman in Bladenboro, North Carolina, and Jay Reeves in Birmingham, Alabama, contributed to this report.
Jeffrey Collins and Meg Kinnard in Columbia, South Carolina; Michael Biesecker in Washington and Jay Reeves in Atlanta contributed to this report.
___
For the latest on Hurricane Florence, visit https://www.apnews.com/tag/Hurricanes .

I-95 opens in SC; still closed near Lumberton