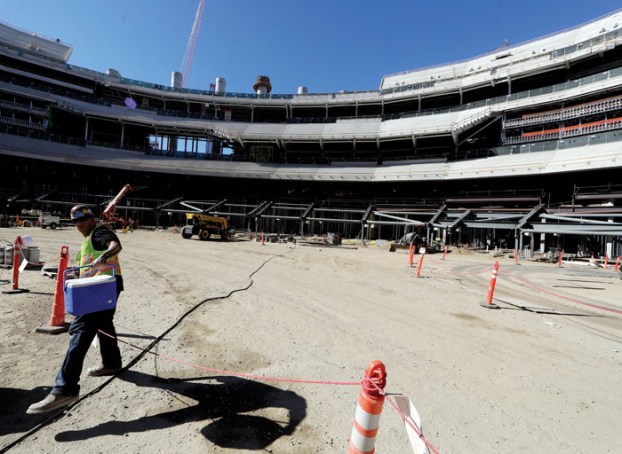 A construction worker works in the bowl of the new LA Stadium on Tuesday, Sept. 18, 2018, in Inglewood, Calif. The new facility for the Los Angeles Rams, and Los Angeles Chargers is tentatively scheduled to be competed for the 2020 NFL football season. (AP Photo/Chris Carlson)

By JOE REEDY, AP Sports Writer
LOS ANGELES (AP) — The Chargers and Rams will meet on the field on Sunday, but both teams are trying to achieve a common goal off it — trying to reignite Los Angeles’ passion for the NFL.
The progress so far mirrors the tour of the LA Stadium at the Hollywood Park site in Inglewood — a slow build.
“The wheel is starting to spin faster, and it is heading in the right direction. We understand that it is going to take time,” said Chargers chief marketing and strategy officer Jeffrey Pollack.
“The live NFL experience took a 20-year hiatus from Los Angeles. What we both share is trying to reignite the love for the live NFL experience.”
Sunday’s game at the LA Memorial Coliseum marks the sixth time that two Los Angeles teams will meet. The previous time was Nov. 13, 1994, when the Raiders defeated the Rams 20-17 at Anaheim Stadium.
Both teams cite increased season ticket and single-game sales, but the TV ratings remain low. The Nielsen rating for the Chargers’ game in Buffalo last Sunday was 7.9 while the Rams’ game against the Cardinals drew a 5.6 locally.
That was a big drop from Week 1, when the Monday Night game against the Raiders drew a 16.7.
The Chargers averaged a 6.0 locally last season in their first season back in Los Angeles. The bigger concern might be the Rams, who averaged a 9.0 when they moved to LA in 2016 but fell to 8.0 last season despite winning the NFC West.
For both teams, the ratings aren’t close to what they averaged in their former homes. The Rams had a 19.7 rating in St. Louis in 2015 and the Chargers a 24.4 in San Diego in 2016.
Both teams though are quick to point out that the television measuring audience in LA compared to the other two markets is more than five times as large.
Despite the low TV ratings, Rams Chief Operating Officer Kevin Demoff sees signs of growth elsewhere. He pointed out that attendance at training camp in Irvine increased this season and that fans were more engaged at last week’s Cardinals game despite the Rams putting it away at halftime.
“Whether it is seeing more T-shirts at the farmer’s market or hats at the beach it is great to see this team growing in the collective subconscious,” he said.
Both teams are building their hopes toward 2020, when they move into the new stadium. Tuesday’s tour was the first opportunity reporters and most team executives got to see construction from the floor of the stadium, which is half completed. Installation of the massive roof panels has already started.
The new stadium will seat 70,240, including 260 luxury suites and 13,000 premium seats.
“It looks like a stadium now,” Chargers President of Business Operations A.G. Spanos said. “To be inside the bowl and see the shape of it you can visualize what it is going to look like.”
Sunday’s game between the Chargers (1-1) and Rams (2-0) at the LA Memorial Coliseum will be another barometer in how much growth remains not only for the rest of this season, but in being able to draw fans to the new stadium.
Both teams are considered playoff contenders, and it’s possible they could meet in Super Bowl 53 in Atlanta.
In a sports marketplace that will only get more crowded next month with a probable Dodgers’ postseason appearance and LeBron James debut with the Lakers, Rams coach Sean McVay sees room for everyone.
“I think there’s a lot of opportunities because of the fans and because of all the different resources at our disposal that there’s enough room for two good football teams,” he said.
“That’s what we want to try to do — continue to try to put out a product that our fans can be proud of and something that they want to come out and support.”
___
Follow Joe Reedy at www.twitter.com/joereedy
___
More AP NFL: https://apnews.com/tag/NFL and https://twitter.com/AP_NFL

By DOUG FERGUSON, AP Golf Writer ATLANTA (AP) — For thousands of fans crammed into every corner of East Lake, it... read more