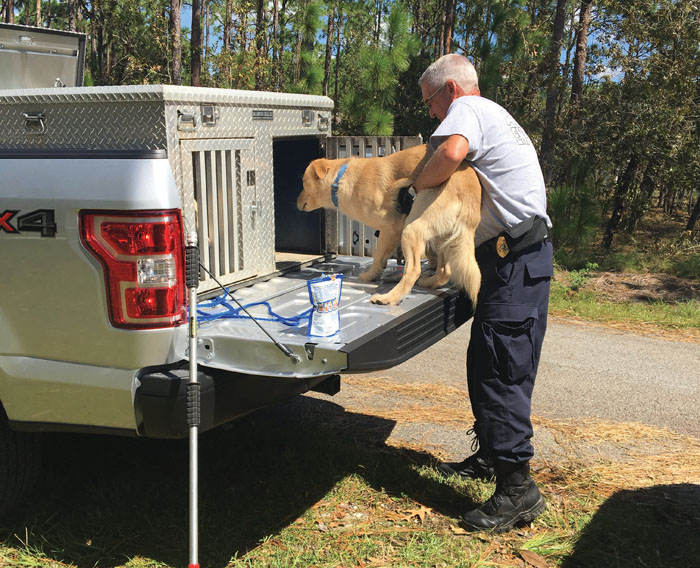 Submitted - Rowan County Animal Enforcement Manager Clai Martin loads an abandoned dog into his truck. The dog was one of five left at a single home as its owners evacuated.

When Rowan County Animal Enforcement Manager Clai Martin heard that state officials were looking for continued aid for struggling coastal areas, he said he felt like it was his duty to volunteer.

Martin, vice president of the North Carolina Animal and Rabies Control Association, said he heard of the need through association president Junior Simmons as Hurricane Florence wreaked havoc on the Carolinas.

He was just starting to think he and his team members weren’t needed when the group received a call on Monday at 3:30 p.m. The next day, he and officers Tommy Staton and Eric Williams traveled to Brunswick County to provide both rescue and relief.

The journey took an unexpected six hours because of flooded and closed roads.

Martin said they found not only catastrophic damage when they arrived, but an exhausted Brunswick County staff.

Many had not been home for nearly a week, he said, but had set up camp at the Brunswick County Sheriff’s office, which its Animal Services is under.

The Brunswick shelter manager had not been able to leave the site for 10 days, Martin said.

Since Tuesday, Martin said he and his staff have assisted with daily maintenance of the shelter as well as the rescues of about 20 animals.

Daily maintenance includes cleaning cat cages and dog kennels in the morning. Rescues occur in the afternoon as civilians and other law enforcement or rescue personnel find animals stranded from the storm.

Martin said many of these animals were abandoned as their owners evacuated.

“It’s well worth being here,” said Martin, “You’re rescuing the animals that have been left behind. It’s good when you can go in and help an animal that is frightened and scared to death.”

During one rescue, Martin said he found five dogs and one cat. Their owners had left their home with the door open, leaving buckets of food and water but the animals behind.

“One minute they were barking and snarling,” he said. “The next minute, after I gave them a treat, they were wagging their tails. I had to get them to trust me.”

For now, rescues and possible rescues continue as water levels from the Waccamaw River continue to rise.

Martin said staff and volunteers are staged and ready to rescue some 50 miniature horses in the event of further flooding.

He is currently running the Brunswick shelter as its manager takes a much needed time of rest. This call was made by Brunswick County sheriff Major Thomas Tolley.

Tolley also serves on the Animal and Rabies Control Association board, Martin said.

“We’re doing what we can to relieve the staff and animal control officers here so they can get some rest and down time,” he said. “I really appreciate that he trusts me so much.”