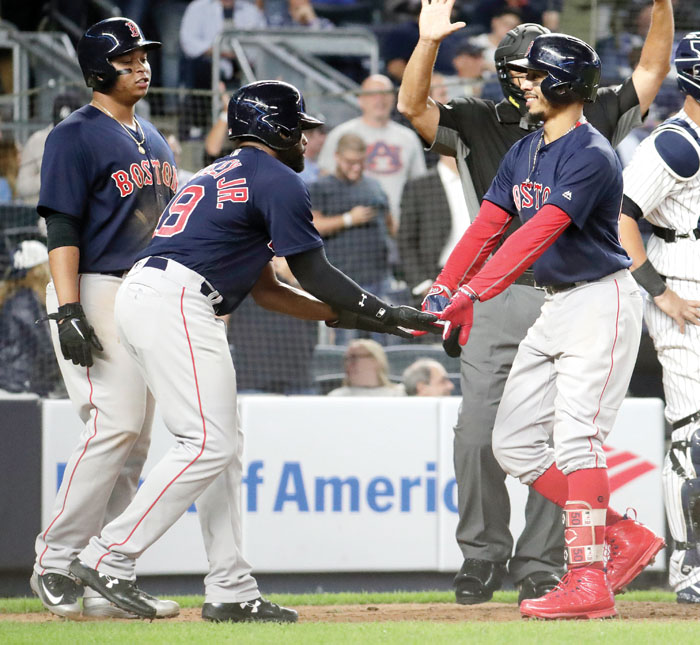 Boston Red Sox's Mookie Betts, right, is greeted at home plate by Jackie Bradley Jr. (19) and Rafael Devers, left, after he drove them in on a three-run home run off New York Yankees relief pitcher Aroldis Chapman during the eighth inning of a baseball game Thursday, Sept. 20, 2018, in New York. (AP Photo/Julio Cortez)

With the best record in baseball and a playoff berth already secured, Boston (104-49) closed out a once-tight division race with nine games to spare. J.D. Martinez and the Red Sox, alone in first place since July 2, will open the postseason at home on Oct. 5 against an opponent to be determined.

Never before had Boston finished in first place three years in a row. The club needs one victory to match the franchise record held by the 1912 World Series champions.

It took three tries, but these Red Sox finally earned their chance to celebrate at Yankee Stadium under rookie manager Alex Cora.

Boston entered the three-game series needing a single victory to lock up its fourth AL East title in six years, but the Yankees put the party on hold for a few nights with two straight wins.

Craig Kimbrel whiffed a slumping Stanton for the final out, and the Red Sox strolled out of the dugout to give each other hugs and high-fives in a muted celebration around the mound. They walked off the field and headed inside to cheers from Boston fans behind the third base dugout.

Then, it was time to break out the bubbly in the Bronx.

Two years ago, in David Ortiz’s final season, the Red Sox celebrated in the visitors’ clubhouse at Yankee Stadium after wrapping up the division crown in New York. But that came in the wake of a loss — after Mark Teixeira’s game-ending grand slam gave the Yankees a comeback win.

About 30 minutes earlier, the Red Sox had clinched when Toronto lost to Baltimore. So they went ahead and celebrated their season accomplishment with a booze-filled fiesta.

This time, they got to do it absolutely right.

Brock Holt also homered for the Red Sox, and Martinez increased his major league-leading RBI total to 124 in a game that took 4 hours, 2 minutes.

Betts, a top contender for AL MVP, opened the game with a double off the left-field fence against Masahiro Tanaka and scored on Martinez’s single. Betts added a two-run single in the second, then doubled and scored in the fifth.

Bradley tied it 6-all with a leadoff homer in the seventh against Chad Green (8-3). Christian Vazquez singled, and Boston loaded the bases before Bogaerts delivered his sacrifice fly. Another run scored on the play when center fielder Aaron Hicks was charged with a throwing error.

Betts launched his 30th home run in the eighth, a three-run shot off All-Star closer Aroldis Chapman, who was activated from the disabled list Wednesday.

Tanaka threw 31 pitches and Rodriguez 29 in a first inning that took 38 minutes even though only one run scored.

Red Sox: INF Eduardo Nunez (left hamstring) sat out and probably won’t play this weekend in Cleveland, Cora said. Nunez exited Wednesday night’s game in the ninth inning after legging out an infield single. … RHP Matt Barnes was available out of the bullpen for the first time in weeks. Barnes hasn’t pitched since Sept. 3 because of left hip inflammation. Cora said he wouldn’t put Barnes in a high-leverage situation right away. … Betts was the DH again but will return to the outfield this weekend, according to Cora. A top contender for the AL MVP award, Betts sat out Tuesday after tweaking his left side two days earlier. He was the DH on Wednesday.

Yankees: Chapman also gave up a hit and a walk in his first outing since Aug. 21. He had been out with left knee tendinitis.

Red Sox: LHP Chris Sale (12-4, 1.92 ERA) is expected to throw about 65 pitches Friday night at Cleveland as he builds back up after missing time with a shoulder issue. All-Star RHP Trevor Bauer (12-6, 2.22) returns to the mound for the AL Central champion Indians in a potential playoff preview. Bauer has been sidelined with a broken right leg since he was struck by a line drive Aug. 11. Cleveland manager Terry Francona said Bauer will go a “couple of innings” before giving way to rookie Shane Bieber.

Yankees: CC Sabathia (7-7, 3.80 ERA) pitches Friday night at home against rookie RHP Yefry Ramirez (1-6, 5.50) and the last-place Orioles. Sabathia was tagged for five runs and seven hits over 2 1/3 innings in Saturday’s loss to Toronto. He has one win in his last 11 starts.

Tiger Woods returns to Tour Championship with share of…