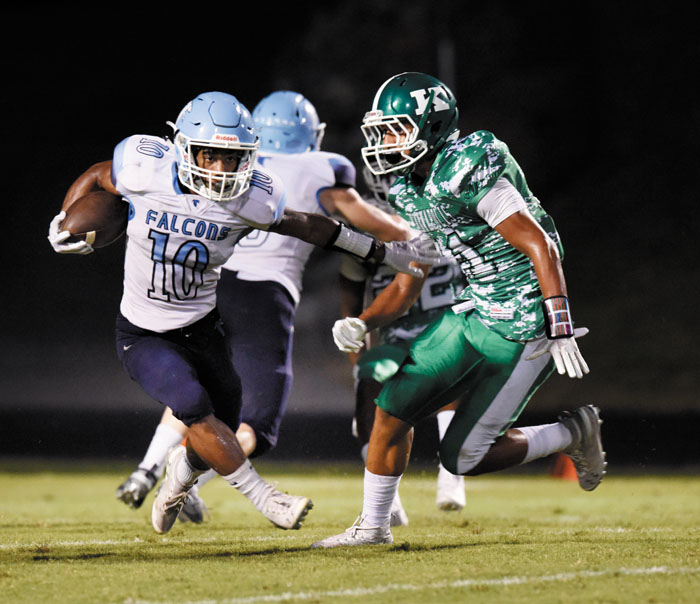 Picks and previews for Week 6 …

North Rowan won’t have a football game this week.

The Cavaliers (3-1) won’t be making the trip to North Moore, which is  located in the sandhills area struck hard by Hurricane Florence. North Moore High is in the small town of Robbins, 67 miles southeast of North Rowan and a little north of the Pinehurst/Southern Pines golf havens where the high school state championships are conducted.

Parts of Moore County received 16 inches of rainfall over a three-day period. There was a tremendous amount of flooding, with bridges overwhelmed and roads swamped by overflowing lakes, rivers and creeks. There were many downed trees from the storm and downed trees mean downed power lines, adding to the safety hazards.

North Moore hasn’t been able to practice football or any other fall sports since last Tuesday and hasn’t conducted classes since an early dismissal on Wednesday of last week.

The plan is for school to finally re-open tomorrow with a two-hour delay.

While the water disappeared relatively quickly in Rowan County, eastern North Carolina is still struggling with the aftermath of Florence. Statistics released Tuesday indicated there were still 1,100 closed roads, 340,000 citizens without power (down from almost 600,000 on Sunday) and 10,000 displaced people depending on shelters.

A delay in the state playoffs appears likely to give schools in the east a chance to catch up and play all their scheduled games. It’s not easy to find a window to make up football games. It’s difficult to ask athletes to be at their best twice in one week. The NCHSAA said via email  that it would make recommendations for schedule adjustments no later than Sept. 30.
North Rowan AD Ben Hampton said that Monday, Oct. 8, has been penciled in as a makeup date for the varsity football game at North Moore, but that game will be pushed back to Friday, Nov. 9, if the NCHSAA alters the playoff schedule.  As of now, the first round of the playoffs is supposed to start on Nov. 9.
Like North Rowan, fellow 1A Yadkin Valley Conference member North Moore had its open week last week. Some other schools in the sandhills will have to figure out a plan to make up last Friday’s games as well as tomorrow’s games.

In 2016, hardships created by Hurricane Matthew, led to the NCHSAA pushing back football playoff games.

North Rowan, ranked ninth in 1A and looking like the county team that has the best chance to make an impact in the state playoffs, will play only twice in the month of September. The Cavaliers beat Carson, 26-0, on Sept. 7, and they’re scheduled to play at South Stanly on Sept. 28. North hasn’t played in Spencer since it beat Lexington on Thursday, Aug. 30,and won’t be home again until it takes on Albemarle on Oct. 5.

As far as the picks, I’ll miss having North Rowan-North Moore on the schedule. That’s been an easy one over the years.

The picks were 4-1 last week, with the miss coming on East Rowan’s loss at Mount Pleasant. I did write that I was “uneasy” about that pick, but that didn’t prevent me from getting it wrong. For the season, the picks are 18-7, hardly stellar, but I’m confident about this week. There’s a clear-cut favorite in every game … although clear-cut favorites can falter. We are talking about teenage athletes.

The Spiders have been outscored, 112-21, and are 0-4, numbers you have to keep staring at over and over to convince yourself that they’re for real. Concord was shut out in its first three games, but it showed signs of offensive life in its last outing.

West’s defense hasn’t really scared anyone.  West’s running game hasn’t scared anyone, either, and West is 5-16 against Concord all-time.  Still, I think West (2-2) will do enough to win a close one at home.

Salisbury’s offense has sputtered frequently so the Hornets  (2-2, 2-0 CCC) don’t have easy games, but the defense is pretty stout.

Lexington (3-1) has the better record, but the Yellow Jackets’ three wins all came against teams with losing records.

Lexington is a passing team, which should be a favorable matchup for the Hornets. What they do best is pass defense. State player of the week Cameron Gill had three picks last week, and the Hornets have 11 as a team.

Salisbury coach Brian Hinson is worried about this one. Lexington’s sophomore QB  Tedric Jenkins Jr. is putting up good numbers and is being mentored by quarterbacks coach Mitch Ellis, who was Hinson’s college teammate at Catawba.

Jenkins’ late father was a tremendous athlete at Lexington. As a freshman in 1994-95, he was instrumental in a Mike Gurley-coached team winning the 2A basketball state championship.

It’s hard to be optimistic. South (1-3, 1-1 CCC) lost at Ledford 50-0 last week, and North Davidson is probably one of the best five in 2A, probably a bit better than Ledford.

South used to do fine against the Black Knights in the 1990s and still holds a healthy lead in the all-time series, but a lot has changed.

On the bright side, South is unlikely to play anyone as good as Ledford and North Davidson the rest of the season.  The Raiders just have to survive this stretch without injuries.

Pretty awful not long ago, the Trojans (4-0) are now knocking on the door of a top-1o ranking in 3A.

Head coach Brandon Gentry and his staff have done a whale of a job in turning things around quickly.

Northwest QB Nick Wilds-Lawing, who suffered a season-ending knee injury in 2017, has thrown for 796 yards and six TDs and only one of his 70 passing attempts has been intercepted.

East (3-2) got off to a splendid start but has  been thumped soundly in its last two outings.

Northwest trampled East, 48-6, a year ago. East shut out the Trojans, 8-0, two years ago, but a lot has changed since then.

Central Cabarrus (4-0) has been the most impressive team in Cabarrus to this point, boasting a balanced offense and a defense that always stiffens in the red zone.

Evan McGee has completed 69 percent of his passes for 590 yards, with nine TDs and no interceptions. His QB rating is off the charts.

Carson will try to keep Central’s explosive offense off the field with a grinding, clock-chewing ground attack, but the Vikings are tough to run on with 6-3, 230-pound linebacker Hakim Simmons providing a formidable roadblock.

Carson (2-3) is tackling a non-conference schedule that should provide excellent preparation for the North Piedmont Conference portion of the season.

Carson will have some confidence. The Cougars beat Central in 2016 and Central was fortunate to beat Carson, 26-20, in 2017.

The scoreboard may be spinning in Kannapolis. Both teams are explosive.

The teams have different defensive approaches. The Wonders like sacks and go after quarterbacks. Davie has 10 interceptions.

Davie (3-2) is probably a year away from being really good with a big-time sophomore QB, a super sophomore receiver and a junior and freshman carrying the rushing lead.

A.L. Brown (3-2) is good now, led by dual-threat senior QB Jordan Medley. He’s coming off a fantastic game against West Rowan in which he accounted for five TDs.

The teams have played similar schedules. Both have taken on Mooresville, West Rowan and Carson, so it’s not hard to get a feel for how this one will go. Look for the Wonders’ experience to prevail, but Davie can make it interesting.